Many years ago when I had my own setting office, a client asked me to set his Emerald into a Full Bezel pendant. As I did set all of the diamond setting surrounding this stone. It was me to finish off the project. He said he gave it to two other setters, they both refused as it was too difficult & it might break in setting. There was a noticeable black inclusion near the tip of the stone…in the Pavilion. I replied “Today is Friday, you can pick it up on Monday!!” On Sunday I spent two hours in preparing to set set this beautiful stone.
As this would be the height of my career, I started to take photographs of it during the setting process.
The very first thing I did was to turn off the radio, stop any telephone calls and concentrate 100% on what I was to do. In today’s market in 2017, it would cost well over $15,000.00. In 2005, it was $7,500.00!
Once I put the working area of the pendant on a shellac stick I felt comfortable & had the gold work near my hands & fingers…very important!!
I started to look at the polished facets underneath & wanted to have them not touching any metal during the hammering & pressing over the metal. For each facet corner, I carved a line into the bezel wall. I marked in ink where each of these could touch the metal. As for the point of the Oval, I burred a hole right into the metal, larger that the point itself & and allowed no touching of stone to the metal. This work took loads time & careful examining with my 10x loupe. I then prepared a seat for the girdle, again using a round bur larger than the girdle itself, this carving went all the way around the bezel wall. The cost of replacement never entered my mind, but I was nervous though…;>)
With a large HSS, bur I extended the ‘carving’ below the round bur line. I went into the metal deep but not exceeding 50% into the metal wall. I filed off the outside of the bezel wall so my pushing & hammering wall was thin enough to bend over! I then placed the stone into the bezel. making sure that the stone wasn’t rocking, if it was, it was pivoting on a piece of unwanted metal, that had to be cut away.
$7,500.00 was on my plate!!! I hated to see Emerald dust laying around!!!
Once the stone was sitting & not moving, I started to hand-press the metal at the point of the stone and work further along the bezel wall until I reached & completed the full frame. If I found some spots that needed my reciprocating-hammer, I did use it ever so gently, but on a ‘lowest-pressure’ level.
At the end of the setting I got my Onglette graver #2 & Bright-Cut the very inside of the bezel wall to give the frame an exact width resulting in nice even cuts. I then used my #180 grit Pumice Wheels to clean 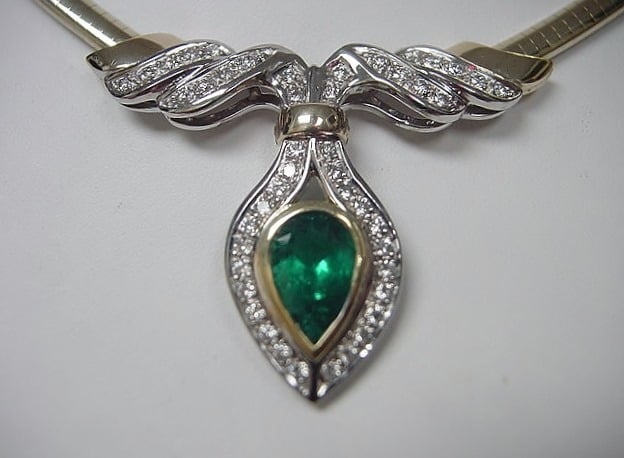 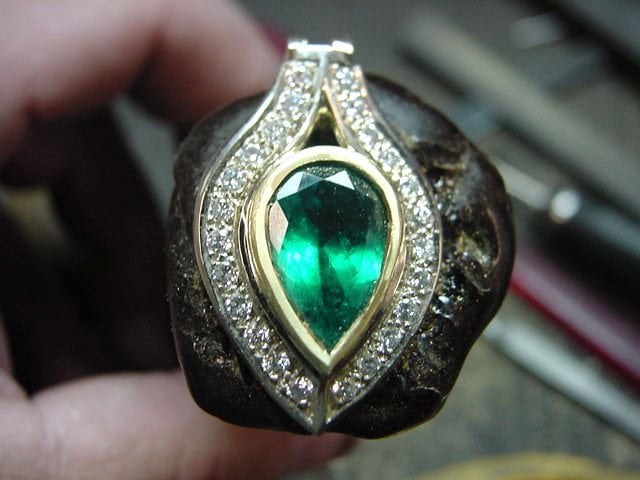 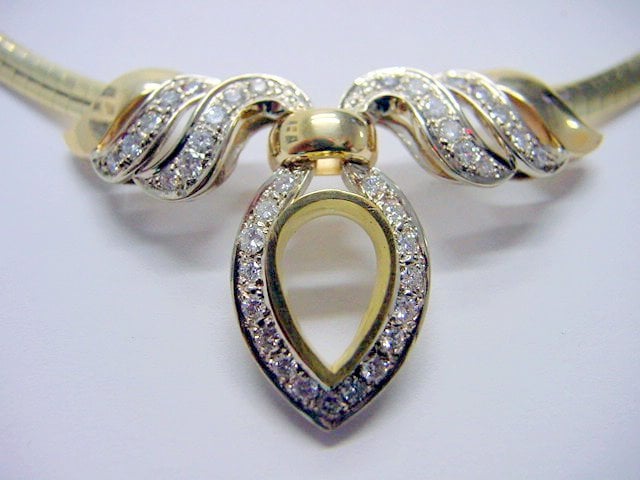 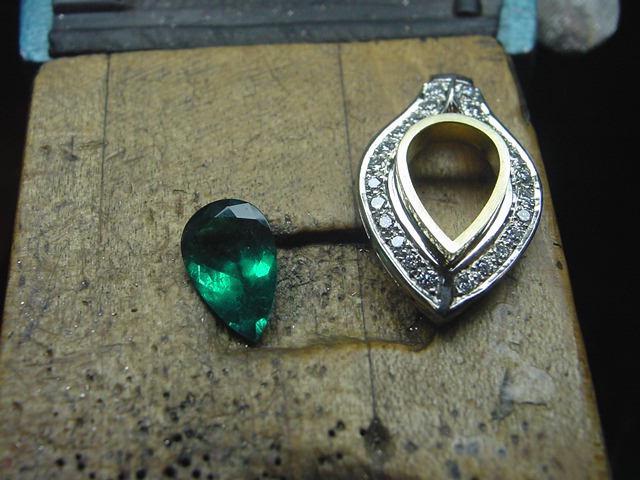 everywhere, no marks at all…pictures were taken & here they are…Enjoy!

Gerry-You forgot the most important part of setting a large Emerald. First
I put a towel on my chair in case I chip the stone and wet my pants:-)
My sweetie Tim refers to these kind of jobs as a one diaper or two diaper
setting job.
XO-Jo
PS Very tidy bright cut graver work especially at the point of the pear.

I once made the ring but had the stone dealer have the very high value emerald set, just so he would assume the risk instead of me.

Mark- The person setting the stone is the liable party. The only time we
ever had any kind of liability insurance against breakage and chipping cost
$12,000.00 for just the one day. It included two off duty undercover cops.
It was purchased though Lloyds of London by the diamond broker who owned
the stone. It was a 17.24 ct internally flawless and colorless diamond.
It’s value was set at $3,000,000.00.
I refused to have the stone on our premises without it.

That’s just un-rant-able.
Did you also pay theft insurance for that one day, or was that part of the coverage included in the stone owner’s policy?

Sheesh! That’s frightening story. I would not want to handle such a stone.

Mine had a cost a little over 100K. I didn’t take possession of the stone, just measured it and made the ring. The dealer in Houston had it set.

It was in an engagement ring believe it or not. The customer broke the emerald within 6 months. Her new husband replaced it with an equally expensive diamond. The couple was in their early 20’s and life was easy.

I set a $350,000 8 ct square step cut truely spectacular emerald, but had the client take out a workmanship policy. It cost her $1200 for two hours of labor, but I wouldn’t have touched it without that policy.

Wow, that sounds nerve-wracking! Don’t supposed you have any pictures handy. Would love to see it if so…
On the other hand, insurance for a day wouldn’t have occurred to me. Just goes to show there’s always something to learn.

Our insurance policy has a provision for coverage of broken or damaged property under our care, including covering damage to customer-owned stones being set by us. The standard limit of coverage on our policy is $25,000 per item. We also have the option of calling our agent to request increased coverage for specific pieces. There is no limit, we just state the value and how long it will be in our shop and it’s covered. The premium is added to the next statement. We have used this service several times, fortunately we’ve never had to make a claim against it. We add the premium to the customer’s invoice.

Check with your insurance agent to see if this additional coverage is available. Our insurance company is Federated, but I think that Jeweler’s Mutual also provides this kind of coverage on request.

Hey Jo, isn’t it a strange feeling when you go through all of those security procedures and worries during the time you have the piece only to watch a client put it on her finger and just walk out to her car?

Here is a photo of the ring. The top of the ring and the shoulders
connecting it to the sure fit shank were all hand fabricated out of
platinum.
The broker sent a model of the diamond from NY. Tim made the mounting
from the model. The stone then was sent out here via Brinks. Two off duty
plain clothes cops picked Tim up, took him to the bank where the stone was
and then drove Tim and the stone back to our home studio. They then sat in
our studio with their hands on their guns while Tim set the stone. After he
was done setting they took him back to deliver the ring.
Sadly as I predicted the diamond was removed from the ring after
two-three years and another mounting made. Fortunately for us the client
loved and kept our mounting and had another stone set into it rather than
melt it down.
When a stone is that important it’s all about the stone not the
craftsmanship in the mounting. Big important stones are often removed and
remounted. One of the downers about making art out of commodities. The
costly materials are more important than the finished object.
I did get to wear the ring for about two minutes and “Ah tell you whut”…
All of the liver spots, scars, and wrinkles on my hands magically
disappeared while I was wearing that thing:-)
Have fun and make lots of jewelry.
-Jo Haemer
www.timothywgreen.com 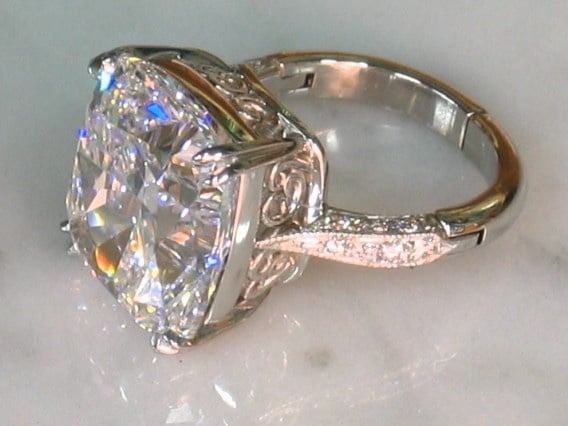 Thanks for the photo. Beautifully done.

It’s somehow reassuring to know that a stone of that value does in fact have magical properties.