To our stone gurus-- What is the difference between holly blue agate
and chalcedony?

It’s Holley agate, not holly agate, and therein lies the difference.
Holley is a locale in Oregon where this beautiful purplish (not
really blue) material is mined. As to whether it’s actually agate as
opposed to chalcedony (a distinction I always have trouble with),
I’ll let the true gemologists answer.

Holley Blue is a Chalcedony, there is no difference excpet its type
local from Oregon. The best Holly will actaully be Purple in color
and with no inclucions or fractures. The location has been closed
for years and good cutting rough is qiute limited. 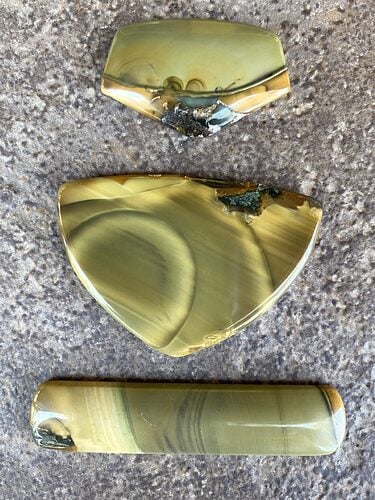 Shain has been cutting cabochons since 1994 and created the Freeformcabs brand in 2004. Visit the catalog on Freeformcabs.com to see some great finds at a fair price. Or visit his Freeformcabs facebook group and start sharing your Freeformcabs!

Technically, not a thing, Noel. Holly blue agate IS chalcedony.
Sard, sardonyx, chrysoprase, agate, jasper, chrysocolla, bloodstone
and myriad others (such as flint) are also varieties of chalcedony.
Basically, chalcedony is a cryptocrystalline (invisible to the eye)
form of quartz. The differences among the different varieties are in
the other trace minerals present when they formed, along with the
various geologic events that formed them.

The number of these varieties is staggering. The number of different
types of agate and jasper alone boggles the mind. Most are typically
named after the location where it was discovered, or the person who
discovered it. Montana agate, Biggs picture jasper, Lake Superior
agate, etc. are examples of location names. Others might be named
after inclusions, such as dendrites. Banded agate is named after the
banded structure. Geodes can have cryptocrystalline banded chalcedony
near the outside of the formation, microcrystalline formation closer
to the center, and very large individual crystals lining the inside
(think geode cathedral).

Both are in the quartz family and agate is a type of chalcedony
(where the confusion starts, I think!) Chalcedony is a single colored
material whereas agate is multi-colored with fortification or a
banded pattern to it. Based on that, the fortification in Holley Blue
makes it an agate. Check this out for more details:

Interactive guide to hundreds of rocks and minerals.

Chalcedony describes a fine grained microcrystalline silica bases
quartz that is massive; never in crystal form but can be mammilary,
botryordal, etc., often with concentrically or parallel bands (though
not strongly banded in different colors as agate). It is usually
translucent, though can be nearly opaque and normally occurs in a
light to medium color, usually singular but sometimes two or three
colors together.

Cheers from Don at The Charles Belle Studio in SOFL where simple
elegance IS fine jewelry!

Nothing. Chalcedony is the cryptocrystalline variety of quartz.
Agate fits the definition. Holly Blue is a little purplish,
Ellensburg agate is a little grayish, the Namibian material is
grayish to very blue, lots of local varieties…all chalcedony.

Holly Blue Agate is actually a light purple in colour whereas most
of the Chalcedony is a light blue colour. Holly Blue also comes from
South Washington State the chalcedonies from various
places/countries. Cutting of both is about the same as both seem
quite hard and take a wonderful shine.

No difference. Holly Blue is just blue chalcedony from a specific
location which has a very attractive hue.

Holly blue agate, actually Holley Blue, is chalcedony, all agates
are. It is just another one of the thousands of names that stones,
particularly agate and jasper get from either the person that found
the stones, or the location that they are found, or just a name that
sounded good at the time. Holly blue was found around the Holley
Oregon area, I don’t think there is any collecting being done any
more. Check out some of the names at this site

Lots of info on location and old articles about stones and their
common names. One of my favorite stones and in my opinion, one of the
prettiest is called Stinkingwater plume agate, named for
Stinkingwater Creek in Or. Ugly name, beautiful snow white plumes in
almost water clear agate, or chalcedony.

Holly Blue is chalcedony that specifically comes from Holly Oregon,
As Ellensberg Blue comes from Ellensberg Washington. There are slight
color variations in the blues- violet ranges. As I understand it…
chalcedony is an agate.

And on polishing do get something between the 200 and 600. It will
help.

Agreed with the notable exception of chrysocolla, which is a copper
mineral. I am very happy when chrysocolla is well-infiltrated with
silica, as this makes it cuttable- chrysocolla which is not
well-silicated is soft, crumbly and so porous it will hiss when
wetted.

Of course, there is that lovely stuff which is known variously as
"chryocolla gel" or “gem chrysocolla” which is really so much silica
and so little chrysocolla that it could probably be referred to as
"chrysocolla-colored chalcedony."

This is like asking what is the difference between a Ford and an
automobile. All agates are forms of chalcedony, so chalcedony is the
class of cryptocrystalline quartz which includes Holly Blue Agate
(which is not blue at all, unlike Ellensburg Blue, for example). The
identification “tree” begins with quartz, which can be crystalline
or cryptocrystalline (and some mineralogists add a separate category
for opal). Within cryptocrystalline there are several further
categories, basically beginning with chalcedony as the purest form,
working down to flint or chert as the most impure (purity being the
relative percentage of quartz contrasted to impurities or non-quartz
minerals).

Actually, you’ve got it backwards: agate is a chalcedony.

Glad to lend a hand! Blue Chalcedony is, as it’s name infers, any
chalcedony (cryptocrystalline quartz) which is bluish in color –
whether it is from the original Calcedon site in Turkey, or not. In
order to wear the noble title of “Blue” chalcedony, the material
apparently only has to bear an infinitesimally slight bliush cast, if
the samples I once received from the original Turkish site are any
indication; most of it was rainy-day grey with only 3-5% blue in it.

Holley Blue Chalcedony, on the other hand, is actually a lilac to
rich purple (amethystine) chalcedony, typified by thin, horizontal
vugs of colorless microcrystalline druzes or cryptocrystalline
quartz, surrounded by 1-5mm thick layers of white chalcedony,
followed by various shades of lilac, lavender or purple chalcedony.
In thin cross sections, a good deal of this material looks like a
rather sleepy Rose de France amethyst – or, if you’d prefer, a
hybrid of that amethyst and the milkier grades of Brasilian Rose
Quartz – but with a cross section more like a diffuse Crazy Lace
Agate. Holley Blue came only from one site near Lebanon, Oregon – an
area which has since been subsumed under the aegis of the BLM, so
future mining is unlikely. Although I can’t swear by it with 100%
certainty, one report I’d heard, years back, explained that the
material was originally named “blue” because of the decidedly bluish
cast that some of the surface “float” material had when it was first
discovered, back in either the late 1960’s or early '70’s. (Since the
reddish or pinkish components of both rose quartz and some varieties
of amethyst, as well as the topazes from both Colorado and Guerrero,
Mexico, are easily bleached out by prolonged exposure to sunlight, it
seems at least remotely possible that this explanation carries some
veracity. Perhaps there are some “older timers” out there with either
firsthand experience or more familiarity with the stuff? Whether or
not that’s so, I hope my insights’ve been helpful to you, Noel!

Best regards to you and “Bob”,

The stuff I have seen in puplish blue. Named after the Holley school
which is near the deposit. My understanding is that it is closed.
Whole chapter on the material in my book covering Mojave blue,
Ellensburg blue…etc. Agate is just a common name for chalcedony. 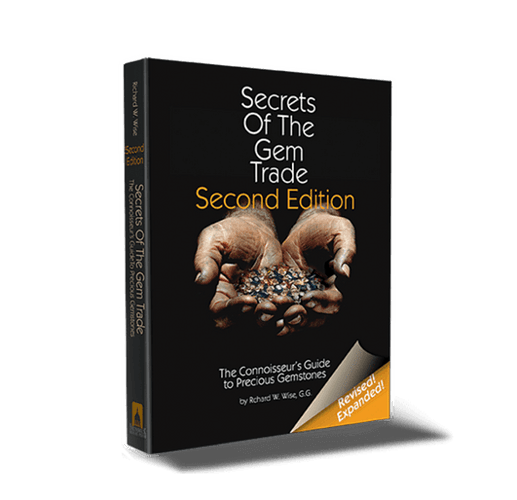 Home - Secrets of the Gem Trade

ABOUT THE SECOND EDITION Even more to read, learn and enjoy This second edition has been enlarged and largely re-written. Completely revised and expanded with 11 new chapters focusing on Jade, Demantoid Garnet, Natural Nacreous Pearls, Conch Pearls,...

Agate is just a common name for chalcedony.

An oversimplification. For those interested in full disclosure see:
"Gem Cutting by John Sinkankas; pp 274-276.