Heat shield for pearls or other porous materials

I am trying to ball-up both ends of a piece of sterling silver wire
that goes through a fresh water pearl (attaching it to a bale). One
side of the s/s wire is obviously balled up prior to threading it
trough the end of the bale and the pearl. How do you ball-up the
other side without burning the pearl in the process. I have tried
the clay-like heat shield and it still burns the pearl or other
objects like elk horn tips. I have tried 2 different torches
including a Smith Little torch using oxy / propane - small and
medium tips. My s/s wire is 14g - to 22g.

Mary – see if this gives you some ideas. If this image becomes
visible on Ganoksin, it looks like I successfully balled up the end
of the wire going through these carved pearl earrings to hold them
in place. But I didn’t. I made the top findings for the earrings and
glued them in place with epoxy. They only go half way through the
pearls. Then I made the bottom findings – sterling silver shot on
20 gauge wire. I glued them and inserted them in the bottom holes. 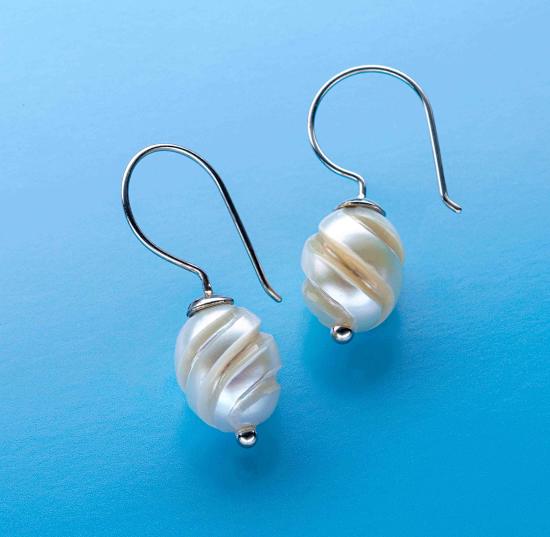 Use gripping pliers to hold the top of the wire above a bowl of
water and the pearl and balled up end fully submerged.

Ball up one end of two wires, half length, and glue then in.

Split/saw the pearl in two. Ball up both ends of the wire and then
glue the pearl back together over the middle of the wire.

Thread one end of the wire and make a nut from a bead.

A laser welder is the only safe way to ball wire after and then only
a skilled operator would be called for. An option I have used in the
past is to put a threaded wire thru the pearl and tap a ball to
screw onto thethread. If you aren’t wedded to the idea of balls, it
also can be riveted or upset onto the other side. Gary

Another option is to simply hammer out the unballed end and curl it
around.

Try wet toilet paper and a very hot flame. Aim the flame across the
wire (not directed at the pearl). Do it fast, get in and get out

I use fine silver wire as it makes a nice smooth ball quickly and
does not have to be pickled. As a heat shield I clamp the wire with
a locking tweezer close to the pearl and it works just fine as a
heat shield. Alma

You need to have two wires with a ball on one end of each.

Glue one in each end of the pearl.

Marry my only suggestion is to submerge everything in water except
the pieceyou want to ball up then use your little torch with number
5-6 tip. If that does not work then ball up a piece of silver and
drill it half way and set it like you would a pearl on a stud or try
the above technique and some easy flow solder to solder it in place.

A very wild thought, but it could work, use a raw banana/you can
even try potato push the pearl right inside with the balled up silver
wire on the insides leaving the wire length to be balled up exposed
apply the torch, once balled up pull out the pearl and wipe it with a
wet tissue.

you can do multiples this way.

Advise as this is a thought and not tried and tested please try out
with one pearl initially Would love to hear about the results.

Raw banana and potato both have good heat absorbing properties and
often used while working with heat sensitive stones as shields.

I have a small pulse arc welder and it work great. #2 tip, between
45 - 60 watts (depending on wire configurations).

I found a used on CL for a good price. If you are going to do ALOT
of close tolerance fabrication, it’an amazing tool.

It will protect your work to over 5000 F! I would experiment on an
insignificant posted pearl first to see how it works.

(Hard solder a post to a piece of metal large enough to apply the
paste to the pearl and melt hard silver solder next to the heat
shield.

I never found these working with pearls, Opals and other porous
gems. These work well with diamonds. Rubies which are treated do get
affected. Treated Blue diamonds also get affected. My experience.
Umesh Umesh.

I dont quite follow what your trying to do to support the pearl from
a bale or as we call it here in the UK a jump ring.

What I regularly find here is the lack of engineering background to
solving such problems.

If theres a simple way to assemble this small item without using
heat then one should look for it.

For example, drill the pearl say half way through if all you want is
to hang it from say an ear wire.

assemble your bale plus ball plus the wire that is then glued with a
2 part epoxy glue into the hole in the pearl. if the hole is say
3/16th in deep it will never come out in normal use.

Now if you want a bale on both sides of the pearl so you can for
example hang several in a string, youll need to go to a cold
mechanical assembly.

The easiest way to look at the technique is to Google for Talurit,
the swaging way of making loops in wire ropes.

Transferring this technique to your pearl, you drill right through,
assemble the wire as previously described, then make your loop after
you have cut a small length of tube say 1/16th in long that you make
oval so you can push the wire back into it. then with a suitably
modified pair of wire snips just squeeze the oval tube into a
ball/circle and youve made your second bale or jump ring. all cold.

Limiting yourself to just a torch, saw and file isnt the way to go
nowadays.

For another example, when I make gold ended sterling twisted
bracelets or wire bangles i made a 2 part steel die. I made this from
some hardenable angle iron hinged with different sized holes drilled
through then countersunk at 45 degrees, held as usual in my 3rd hand
the indispensible leq vice.

The metal is clamped in the flat part and the punch drives the gold
or other metal into the cone shaped recess crushing it around the
wire, using a flat ended punch. Then a decorated punch with say a
flower motive driven into the flat end. But hey! im a hammer man and
90% of what I make is wrought.

they never come apart, and much quicker than soldering.

I cannot believe you would suggest cutting a pearl in half! Really?

Thank you, Jeffrey for the reference to Isoflam.

As you noted, not many of us have an engineering background or
mindset. I was very interested in your description of making ends for
bracelets, but cannot picture it. Is there any chance of your sending
images? Most of us are so visual, it would be a great help.

I agree with the potato idea. My dad used this trick many a time
"back in the day"!