I’m writing today to get some help & recommendations, hopefully from
some of you that understand the metallurgy & age/heat hardening
process that can be done to white gold alloys. I’m having a hard time
finding a lot of specific other than an article here on
Ganoksin.

We have an ongoing issue in our shop with a customer’s ring where
the prongs are just way too soft and she keeps returning for us to
tighten them up. The ring is white gold, marked 14K. My coworker
asked if I would age/heat harden the ring in my kiln at home and she
was under the impression it could be accomplished leaving the stones
in place. She reasoned that diamonds are safe to cast in place and
thought they would be safe in a controlled kiln cooling slowly, but I
pointed out that many enhanced diamonds cannot be cast in. Anyway, I
told her I would definitely have to fully research everything before
I would even consider this. I have heat hardened silver many times
and the process for silver is fairly easy & straight forward &
requires less heat. White gold alloys on the other had seem to be
much more of an issue, at least from what I read, and I definitely
want to know the specifics, as well as the risks.

My colleague describes the ring design as having several small
diamonds and one rather large (almost 2 carat) fancy cut central
diamond that looks to be of high quality, having only a few small
inclusions and she says it’s very clear & bright. She does not
believe it is enhanced or doesn’t appear to be under our laser’s
scope. If this even matters? (I have not personally seen this ring
yet.) The ring in question was apparently custom designed and
produced by a jeweler in California, so finding out the exact alloys
of the gold would be very difficult.

I have read this article: 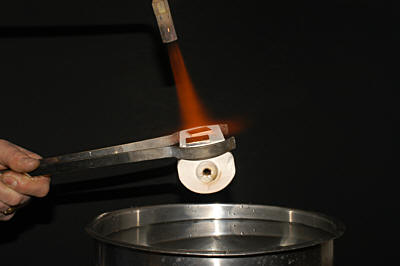 Heat treating metals - particularly gold alloys - an make them more delectable to work with, in this case by improving their hardness. Read for more!

about “age hardening” but also thought I would pose the question to
our Ganoksin jewelers who have much more experience.

I explained that I’m not really comfortable attempting anything like
this on such a valuable custom made ring in which I do not even know
the alloys and in which there are multiple stones, because it looks
like they all would probably have to be removed?

My recommendation to her was to laser weld reinforcement into the
prongs at this point, but I wondered what else any of you might
recommend for a problem like this? Any feedback would be most helpful
and would also help educate us as to the possibilities or issues
involved with any similar problems we might see come in in the
future.

you are right about the research that would have to be done should
you take on the job- but that’s not free, so don’t forget to include
it in any estimate(s) you may give the client. The client however is
the the key- was the piece bought from a corporate jeweller or if
"custom made" it should have a maker’s mark as opposed to a simple
karat mark. It sounds like a semi-mount to me : purely speculation
and purely based on the description. and if I remember from your post
this ring has been repaired previously- which suggests a cheap
Chinese casting with questionable alloys including nickel. I once had
a "white gold’ ring come in and it was a tin, cobalt and nickel alloy
according to an XRF tester. which, if you have a contact or friend
that is a jeweller and buys or refines gold you could make
arrangements to bring in the ring and have that person hit the ring
with the ’ XRF gun’ and give you an extremely accurate reading in
under 10 seconds. At least you would know what you are working with
and from there contract for further work with the client.

Essentially you would perhaps have to do the job in three parts if
the client is agreeable and someone you want to deal with, and the
job is done with all the tedium it sounds like will be involved to
straighten the situation out one final time- Which the client must
understand takes a good deal of time- particularly if there are no
papers on the stones ( or past insurance appraisals, other repair
info, or purchase receipts for the original purchase, stone
replacements or warranties, etc. thus costs you money in time and
research and all the overhead involved:: First, there is identifying
the maker and/or composition of the metals in the ring and part or
setting that may need to be completely replaced with an authentic
metal alloy to match the karat and colour of the part that has failed
more than once (if I remember correctly) .2) identifying the stone(s)
used- for all you know they could be natural diamond and a mix of
cz’s if they were cast in place! Generally a 2 carat stone would
have some documentation with it for insurance purposes. If you have a
Moissanite or Chatham stone that was added after the original piece
was made there could be more tracing as those stones are serialised
and have serial numbers that are traceable due to the warranties that
cover replacement, damages, etc. with the created stones that are
higher in price than natural diamond material. 3) Once you have all
the facts straight you can then present a plan to the client for what
needs to be done to the ring. If the setting is continually breaking
there are plaques, or illusion settings, etc. that may be a better
idea to install than the prong setting that is on there currently.
Matching the metal colour with the shank shouldn’t be a problem
particularly in 14 karat nickel based white. If the piece is more
recent then a palladium white may be the appropriate metal.

As far as soldering if the stones are flawless (a created or
lab-grown stone or high quality natural material) and you can laser
weld it or hit-and-run solder, the operation should be basic and easy
if replacing the failing setting. If there are any reservations about
heat and the stone, a little Vigor brand Heat Shield, or a similar
product, even good old fashioned wet wadded newspaper around the
stone will do the trick to protect it- of course it must first be
fully inspected with a good loupe for fractures, chips, etc. The
small accent stones are cheap and easy to replace should anything go
wrong, you probably have a jar of ’ take out’ diamonds on your bench
! The XRF will give you a good indication of the repetitive failure
of the prong setting, so that info may help you decide which options
to present the client. One thing to remember when repairing or
replacing the setting currently installed is to remove all the old
solder as completely as possible and burnish any exposed metal as you
prep the piece for repairs. Often repair benches forget to prep a
piece completely and a simple swim in a chlorinated pH adjusted pool
can reverse a new repair job!

And then again the job may just not be worth the time or money
involved!..rer

If by extremely accurate you are referring to the fact that an XRF
only reads the surface extremities of the metal then I agree 100%.
However if you are saying that XRF’s are extremely accurate in the
entire composition of what they are measuring then I would have to
strongly disagree. I’ve had samples hit with an XRF and then had an
ICP analysis done on the same sample and i can tell you right now
that they definitely are not extremely accurate.

You are absolutely right, heavy plating will distort the accuracy of
an XRF reading.