Thanks for your input. I wish I could find a hardness scale for
metals used in jewelry like the mohs we have for gems.

Precious metals are rated in Vickers or Brinell hardness scales but
there is not a simple list like for minerals because metals hardness
depends on its current state of work hardening or heat treatment.
You can find books that will give some values for annealed, work
hardened and as cast hardness. My recommendation is Introduction to
Precious Metals by Mark Grimwade. 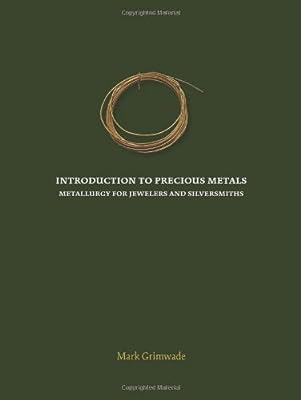 The Moh’s scale was specifically created for stones, and was based
on the premise that one stone was harder than another if it could
scratch it. Other scales, such as Brinel, Vickers, Rockwell and Leeb,
use rather different techniques for defining and measuring hardness
of metals.

The Moh’s scale is far from linear: the difference in actual
hardness (as measured by some of the metal standards) between talc
(Moh 1) and Corundum (Moh 9) is actually far less than the difference
between Corundum and Diamond (Moh 10).

The following table lists the Moh equivalent of some metals.

Platinum, with a 4-4.1 Moh, is actually very hard wearing. I’ve worn
a platinum puzzle-ring that I made about 35 years ago, made of 4
interlocking but separate rings each 1mm in diameter. It shows
almost no signs of wear, despite the fact that I do a great deal of
heavy work.

Platinum wears in a very unusual manner. When the tiny abrasive
particles that are encountered in everyday use scrape the other
precious metals, they remove a tiny slivers of metal, and the metal
gradually wears away. When they scrape platinum, they sort-of plough
it, rather like a plough turns the earth over in a field. Since the
scraping effect is totally random, at random angles, the ploughed
ridges tend to get merged into the ridges already created by
previous ploughing - thus effectively “self healing” the scratches.
It’s not 100% healing, of course, but it’s far better than gold or
silver. My 35 yr old platinum ring is proof of this.

The OP was clearly interested in a jewelly metal that was scratch
resistant; platinum would do the job, but it’s very expensive.
Tungsten and Tungsten Carbide are impossible to fabricate, but
hardened steel is a definite possibility. Ordinary mild-steel can be
readily worked with the normal hand tools used by jewellers, and can
be case hardened easily with a case hardening compound such as
Casenit. Case hardened steel has a Moh hardness of 7-8.
Unfortunately, ordinary steel rusts. I don’t know if there is a
variety of stainless steel that can be case hardened - I would think
there would be such a thing, but I don’t actually know. Can anybody
help?

Chris- There is. It’s called the Vickers Scale. You can even compare
Vickers to Mohs. Just Google or Wikipedia it.

They exist for metals, there are 3 widely used scales, the Knoop
scale, Rockwell hardness and Vickers hardness The latter works by
indenting a diamond into the metal with a known force (weight
applied) and then measuring how wide the diamond indent is. This is
then compared to the calibrated scale and the harness number is
arrived at.

There are also crush tests used to determine ductility that also
give an indirect hardness value.

Those numbers on metal hardness using Mohs scale are a bit
misleading. First it is refering to pure metals not the alloys we
normally use second Mohs is a test of relative ability to scratch a
material with another material.

It lists both silver and gold as having the same rating on Mohs
scale but in Vickers hardness Silver is about 50% harder than gold a
significant difference.

Mohs should only be used for minerals and even then it is only a
measure of scratching one item with another not a quantifiable value
of hardness related to a physical standard.

Years ago I read something that seemed prettyauthoritative at the
time. It said that if you made an average diamond 1000 on a scale,
some diamond would be more than 1000, corundum wouldbe about 325, and
everything else on Moh’s scale would be under 100. Just
interesting…

No amount of forging or anything else you do to it short of dropping
it into a black hole will change the density of metal. It is a fixed
property of the metals atomic structure.

because when a metal is compressed into a space smaller than the
original piece, drop forged into a die.

The same amount of metal is made smaller. Does this not make it more
dense?

I meant to compare castings, which can contain hidden porosity, to
drop forged no porosity.

I thought this is why master engravers use drop forged rings as
opposed to castings.

I am not a metallurgist, so maybe it is me that is denser, won’t be
the first time LOL.

Just found out something the other day, diamonds aren’t the hardest
thing in the world anymore, carbon nano tubes are. go figure. CIA

The Knoop hardness scale which is a measure of hardness expressed as
force/area has talc at about 50 and diamond at 7000. Corundum is
around 2000.

The test is done as a microhardness test in a similar manner to the
Vickers hardness test but having said that there are practical
problems in doing indent tests in brittle materials such as minerals
and ceramics. There are rebound tests that can be done but you get
problems with repeatability. The equipment used for simple lab tests
of this type use a schleroscope which is a drop tube with a ball
bearing of known nature and a scale to read the rebound against. Ok
for wide ranges but not very good for similar materials.

I was fascinated when I learned to use stainless steel as a burnisher
when flush mounting colored stones. The stainless is softer than most
colored stones but hard enough to shape/move the gold and silver
around the stone.

I found out the hard way that the tool steel used in worn out burs
(made into burnishers) was too hard & would scratch the colored
stones I was using. At the time, I wasn’t aware of how each material
affected the other.

I envision a chart with several categories that list common materials
used at the jeweler’s bench from hardest to softest.
Categories could

…continued. I hit the dang send button before I was finished.

Just a thought. Say I’m prong setting a tanzanite in platinum. I’ve
not yet prong set, haven’t worked with tanzanite or platinum. However
when the day comes with a chart such as described above I’ll be more
informed to do the job.

I’m a self taught amateur without a master to apprentice with
(something I would love to have the chance to do). Sometimes I’ll
take a class at Craft Alliance here in St. Louis and work with
experienced artists there.

Mostly, I learn through books and videos. The problem I keep running
into is the book I buy will have technique after technique but never
guide from the very beginning to the very end of a project. I’ll
watch a DVD on stone setting however it’ll show you how to set the
stone but not what happens after: the finishing or how to refinish if
you let the burnisher slip and mark the metal (a question asked
before and am grateful to those who helped).

But it is not made smaller, you cannot compress it. You can reshape
it but the density stays the same.

I think you’re right. The metal won’t be denser, but the piece
will. Steel ships float.

Its not the nanotubes but the monolayers that have the same bonding
as diamond but they also transmit current as well as heat.

Density is not an absolute, and it can be different for the same
material depending on the temperature and pressure that the substance
is being subjected to. Density = mass / volume As an example, basalt
and pumice have basically the same composition, but pumice is much
less dense than basalt (it floats so density is less than 1) basalt
sinks in water so it has a density greater than 1. Specific gravity
is similar to density, but has no units. Given a standard temperature
and pressure then the density of a specific material will be the same
for all specimens of that material. When a metal is compressed into a
smaller volume, you are changing the pressure (and sometimes the
temperature as compression raises temperature) so you are increasing
the density of that particular item.

It is recorded at standard temperature and pressure and at STP it is
fixed.

Assuming that they have the same composition they will have the same
density because density of and element or compound is measured on a
homogenous sample, no air pockets.