I have been using a compressor driven hammer hand piece for years. I
bought it from rio years ago. I set thick cast bezel .8 mm. The hand
piece I have been using needs to be replaced and I am thinking about
a hammer hand piece with a Fordom lx motor. Since I am setting thick
bezels I need a handpiece that can really move metal. Would the
Foredom 15D work? I am open to suggestions.

In my experience, the Badeco #222 hammer is considerably more
powerful than the fordom hammers. More costly too, unfortunately…

You might also consider the GRS hammer handpieces on one of their
engraving controllers. pretty powerful hammers, with a bit less to go
wrong over time, at least that’s been my observation.

In my opinion, the Badeco hammer is the best on the market. It can
really hit hard, but it’s very controllable and adjustable, down to
just a very light tap. It also has held up much longer than any
others I have tried, which covers most of the commonly available
ones.

I use it with a geared Foredom flexshaft (Series EE), so I can make
it just tick over. I don’t think those have been available for quite
a few years, but you might find one in the used tool market. Highly
recommended combo. I like the duplex spring but know many others do
not. Your choice there.

No affiliation with either company, I just like to hammer metal.

My GraverMax pneumatic hammer can really move metal. That is my
suggestion.

I’ve used a Swiss Hammer Handpiece for my flexshaft for over 20 yrs.
and Love it. Powerful enough for heavy jobs yet adjustable for
lightduty also.

I’ve had the GRS gravermax for several years. It’s been trouble free
and REALLY moves metal. I like it better than the Chicago Pneumatic
air hammer that I was using when I was working for somebody else.

Here’s another vote for the Gravermax. It’s not cheap, and you also
need an air compressor, but it certainly works well.

I have the same experience with the gravermax. It moves metal much
better than any flexible shaft motor attachment I’ve ever used.

Kevin, what hand piece are you using?

Hi Kevin, I am currently using a System 3. It is made by the
gravermax people and it connects directly to my compressor. It is
actually somewhat wimpy. That is why I want to replace it.

Gravermax is the name of the machine, not the hand piece. KPK

Ill have to add in the Lindsay series of engravers. Ive got the Palm
Control unit with stainless piston. It has no problem with moving
metal…couple that with the tungsten piston and youll be able to
move a small child. The down side is price. 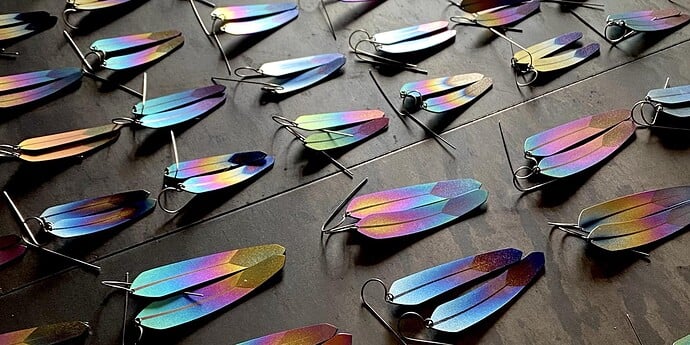 I’ll second that vote, though I can still only drool over the
thought of the Palm control (which roughly doubles the cost). As to
price, well, there are up sides too. I had one minor problem with
mine, sent it to Steve, and it came back two days later, fixed, no
charge, not even postage. That’s service for you. Plus, as a jeweler,
I can rather get excited about a tool that’s built as beautifully as
a piece of jewelry itself. These things are built like a fine swiss
watch… Or better…

For hammering bezels, though, I do still prefer my Badeco. It’s not
that the Lindsey doesn’t have the power, it does. Maybe more. But the
power is a bit different. The badeco hammers have a tip that’s spring
loaded, and moves forward to strike the metal, then back, so you hold
the tip of the hammer slightly away from the metal. With the Lindsey,
the impact is transferred only if the tip is firmly in contact with
the metal already. Perfect for driving a graver, it’s prime purpose,
but I find it slightly more difficult. Mostly it’s just a matter of
the fact that I spent decades learning with the Badeco style hammer,
so a different feel to the Lindsey air graver simply feels different.
Plus, the Lindsey is shaped like a graver, rather than the pen shape
of the Badeco. I find the Badeco shape a little easier to hold for
hammering bezels down, just as I’d find the Badeco more awkward were
I trying to drive a graver with it (something I also tried once.
Doesn’t work so well…)

But this is largely a matter of preference. I’ve used my Lindsey
handpiece for bezels too, when my hammer happened to be on the fritz,
and it works fine even if I’m not enthoused by the feel of it used
like that. And for the same reasons of “feel”, I never could get used
to that Chicago Pneumatics (or whatever the name) air scribe that
some people like. Good for driving a stipple point when engraving
glass perhaps, but I didn’t like the feel for trying to actually
move metal. Didn’t like that you had to press the tip into the
surface for the action to work… Just felt wrong… But others
apparently (judging by comments here on Orchid when it’s come up)
like it. So it’s personal preference.

I use the Lindsay Classic AirGraver, and swap out to the Badeco when
I need more horsepower. I also have a couple of GRS Gravermaxes with
the 901 handpiece and a Swiss hammer handpiece. In order of ability
to wallop metal, they go from the Badeco which can hit the hardest by
far, especially with a geared motor, to the Swiss, to the Lindsay
(with the optional tungsten piston) to the GRS, which is a little on
the wimpy side and isn’t up to hammering thick 18K white gold bezels.

The GRS 901 handpiece can be beefed up with the heavier spring which
makes it almost as powerful as the Lindsay and tungsten piston combo,
but still considerably less than either the Swiss or Badeco
handpieces. But it does so at a cost.

In the controllability and adjustability category, they go in order
from the best which is the Lindsay to the GRS to the Badeco then to
the Swiss. It is worth noting that a good solid-state pedal and a
gear reduced flexshaft like the old Foredom Series EE increase the
control, power and adjustability of the rotary hammers significantly.

In the affordability category, the least expensive is the Swiss
handpiece, followed by the Badeco, then a major jump to the GRS and
finally the Lindsay (with the GraverMach and Magnum handpiece combo
costing more than the Lindsay Classic). I would add that the quality
of the tools (and their lifespan) is mirrored in their prices as
well.

You really can’t go wrong with any of these fine tools, but if
hammering metal is your only need, I would recommend staying with the
flexshaft powered hammers. The extra price for the tools and
compressor isn’t worth it for just a hammer handpiece. If your
compressor is still working Vince, an air powered handpiece remains a
good option, but either the GraverMach or Lindsay without a
compressor will set you back more than double what a new flexshaft,
pedal and handpiece combined costs. And neither one hits as hard.

The air powered handpieces are definitely more adjustable and
controllable, even if they are weaker in the hammering department.
But they have far more usefulness beyond just as a hammer, where the
flexshaft models really do only one thing. The standard mushroom
handle on the air powered handpieces also makes them quite a bit more
user friendly, the super light tube on the Lindsay makes it feel
almost like a plain push graver.

If hammering power is the most important factor, the rotary
handpieces win the contest hands down and the Badeco beats the bezels
out of all of them.

If you are near Durham NC, I’d be glad to let you try all of them
side by side and see if you agree with my assessment.

No affiliation with any of these companies. I just love tools and
banging on metal.