Gilded Objects Such as Frames for Fine Art, etc

OK - I looked through the archives and this doesn’t seem to have been covered.

Does anyone have any experience in the gilding of non-jewelry art objects? I am thinking of wooden substrate - such as gilded frames, gilded furniture, or gilded objects more generally.

It is a highly specialized process, involving the use of rabbit skin glue, and agate “burnishing” to polish.

I ask simply because there is a fascinating niche market of people who provide this service, and we’ve been asked by a few clients if we can do anything related to the space.

My late father the painter used to gild his own frames and use gilding on
some paintings as well. I still have his agate burnishers. He was born in
1909. He had an immigrant Great Uncle who was a gold leaf beater in NYC at
the turn of the 20th century. Worth looking up how it was made by hand.
Gold leaf gilding is a mostly a lost art any more. My father would prep
the surface with his own home made rabbit skin glue. He’d cook it up on the
kitchen stove. Smelled awful. Made my mother crazy when he’d smell the
house up. He’d then very lightly coat the surface with it and then using a
fine sable brush pick up the gold leaf and apply with the brush. You really
can not touch it with your hands. After application he’d burnish it with
his agate burnishers. Most “gold leaf” these days is an alloy that looks
like gold. You can still buy the real stuff but the cost is a bit high.
-Jo Haemer
www.timothywgreen.com

I have played with gilding over 35 years as part of doing decoratuve object creation. In amother life I used to restore carrousel art for about 8 years. That was over wooden animals - mosttly basswood which is great fpr carving. There was base paint build up - tyically catalyzed automotive enamels and then the quick dry varnishes which creat a great tack surface. Fine leafing metals like Manetti literally waft /float away in a gentle breeze and stick to anything with the most minor amount of oil or gelatin. There are very thinn long hair brushes about 4"wide to use static electricity to pick up and place leaf where you want it. The reddish hue seen peaking thru surface gilding is a spoft substrate cslled Hastings Clay. It allows a burnishing tool to bring up a high polish.

My true love in gilding was water gilding (tiny bit of gelatin in a solution of water) on reverse side of glass. It is reverse paint or eglomisé. Attached are some images of piece - a trifold screen I created. I did mine with a filagree positive and negative effect. It ends up being partially mirrored. The gilding dances light in every direction.

This particular folding screen was created with extremely detailed silk screens. The green was a formulation of translucent nazdar inks that were layered to build variations in the green. Then each panel was coated with gelatinized water. After that a white gold leaf was carefully applied to the whole pane making a mirror. After that, another pass of green design on the back. That masked the areas that would remain mirrored. Then, I very carefully scrubbed to remove the leaf in between the masked / print over areas. It took alot of time with a Qtip and light abrasive. Then another pass of green screened to protect the edges with a .03" halo of ink.

It is labor intensive and takes considerable care, but the results make it rewarding. Its kind of an all or nothing endeavor.

The other piece is an antique La Forné coal hod, mid Victorian circa 1860-70. It has some surface gilding in borders that has deteriorated over the years. It also has a striking heraldic snowflake design that is reverse painted & gilded glass. I’ve been acquiring eglomisé pieces for years. 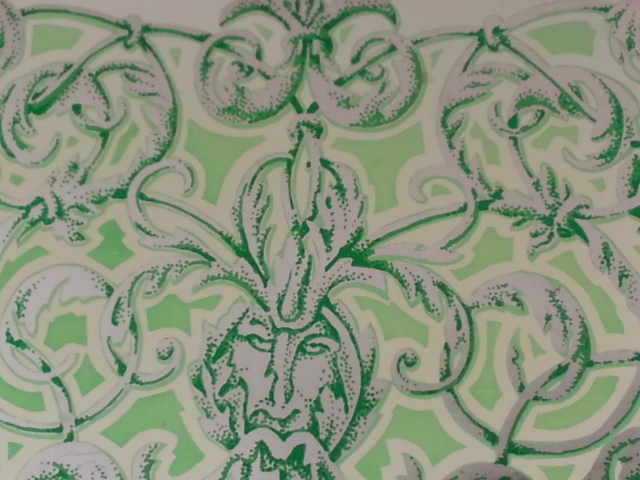 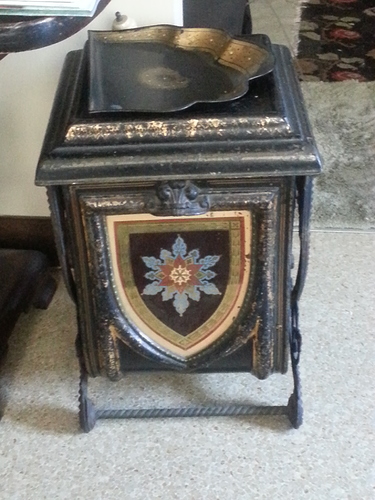 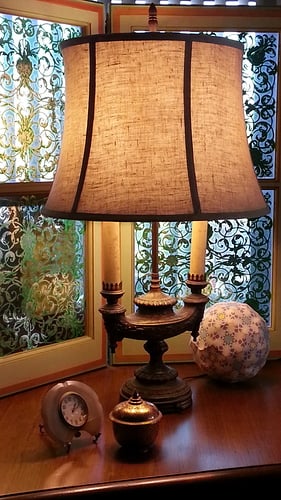 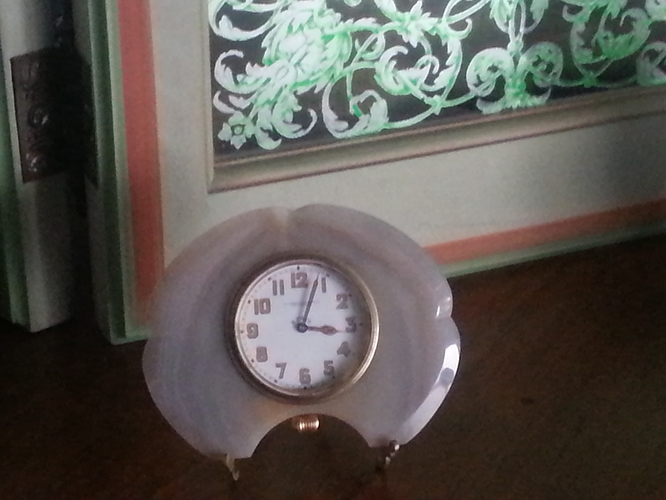 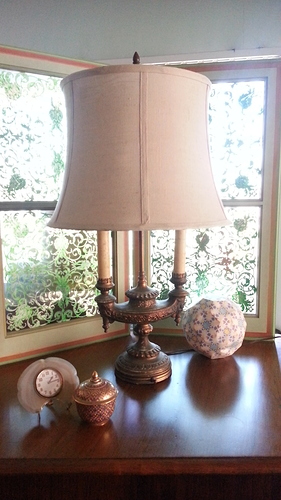 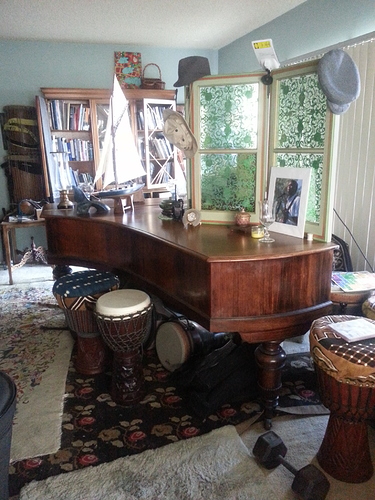 wow! very neat, Eileen!! Thank you so much for sharing.

It was a trip down memory lane! You’re welcome.

There are at least two different approaches to gilding; the water-gilding process, which uses rabbit-skin gesso coated with burnished clay as a substrate, and a simpler process using a “size” (basically a sticky varnish or glue) directly over the surface being coated. I’ve got articles on the Juxtamorph site on both of them. I wrote this one about the latter technique, which is the one I use: http://juxtamorph.com/gold-leaf/ Wies Norberg wrote this one about water-gilding:
http://juxtamorph.com/the-water-gilding-faq-the-traditional-gold-leafing-process/

Wouldn’t alloyed gold leaf tarnish over time? I wonder if there are new developments in this area.

Janet- Oh gosh. I have no idea. My father always used real gold, but that
was back when gold was muuuuch cheaper than it is now. I really have no
idea what alloy is used in the substitute metals.
-Jo
PS: How’s the weather in Jerusalem this time of year?

I am from Malta and for the last two years I am attending lessons in
guilding. It is a very interesting art. We use 24carat. 23.75 carat or 22
carat gold foil. I have just finished guilding a pair of bronze candle
sticks and a bronze Clock. so yes guilding could be applied to metals
although the technique is different to water guilding where gypsum di
bologna is used as a base on the object to be guilded. it is a
specialized art where a steady hand is needed at all time. Over here in
Malta it is quite popular for we do a traditional Maltese Clock where we
use the guilding for decorating.
Apart from using gold foil we sometimes use palladium,silver ,copper, or
aluminum foil as the case may be. Aluminum some times is painted with
shellac to give it a gold look . it is mainly used as a substitute to real
gold foil where inexpensive guilding is needed.

special tools, natural cotton wool and brushes are needed for such art.

My grandfather, at 12 years old, was apprenticed to a bookbinder around 1900 and continued in the trade until he retired. I have his tools, including roulette wheels, stamps, agate burnishers and books and strips of 23k gold leaf he used to decorate the leather book covers. The gold leaf must be at least 70 years old and has not tarnished. He used something called “sizing” to hold the gold, applied with a very soft brush, in place as the tools stamped on the designs. This gold leaf is so thin that it floats off if you breathe on it.Donna in Florida

My partner has been a gilder in London for over 25 years, supplying water-gilded frames to high-end galleries and individual artists. I worked with him for two years but could never achieve the accuracy and speed that he had. I was okay with applying 10 coats of gesso, sanding between layers, however. This was made from whiting and rabbit skin glue.