Can anyone help me with this? Looking for more info on this attachment for my flex shaft. 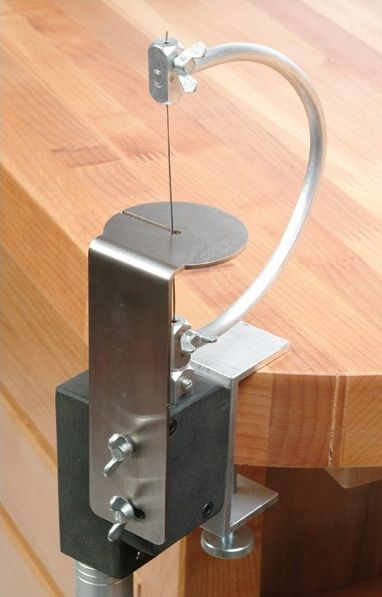 I would love one of these. Sure looks like a time saver.

Where did you find it? I’d sure like more information about it.
Dick Stromberg
Ah Mexico! Where “C” on a faucet means HOT, and “M” on a restroom means THE LADIES ROOM.

This is a Googled picture. I would love to know more about it also. If I remember correctly, Otto Frei Jeweller’s Supply may have sold it. It seems to be a fairly sturdy unit. Arthritic wrists have me looking. Bench mounted and able to save the sweeps is a must. Someone must know.

Just remember, these things only use about 10% of the blade and wear it out pretty rapidly.

Hi,
Yes, absolutely that is a big limiting factor . Then there’s the whole pressure cycle thing , where we learn to apply forward pressure on the downward stroke and release it on the upstroke (except I once worked with a Vietnamese guy who loaded his blades upside down and cut with the upstroke!) . This learned cycle minimizes stress on the blade -and wear, if you’resawing hard material, which I am- so any device that doesn’t duplicate this pressure cycle will wear out blades faster . As far as I know, nobody has been able to duplicate it , and so that, coupled with the short stroke , leaves devices like the saw pictured very lacking, in my opinion.

Also, with lessened effectiveness due to the short stroke, a person may try and push a little harder, which can also be hard on hands (and it’s also a new set of muscles to train), and can also break blades faster . In my experience, for my purposes (sawing pancake dies in 0-1 tool steel) , even saws with a longer stroke, but no pressure cycle,
can be problematic and difficult to use .

But I’m spoiled ; I use two customized (by me) saws made by Lee Marshall . Both accept jewelers saw frames and have built-in forward/backward play in the frame-holding apparatus, so I am afforded my precious pressure cycle . The other extra special thing about them is that one is a one-of-a-kind
prototype , gear -motor-powered unit , and the other is an old Bonny Doon saw guide that I adapted to leg power, so I have been able to keep sawing for many more years than I otherwise would have. But I’ve posted about these saws a bunch of times before. It’s just that I couldn’t live without them , because there is nothing else as good out there for what I’m doing .