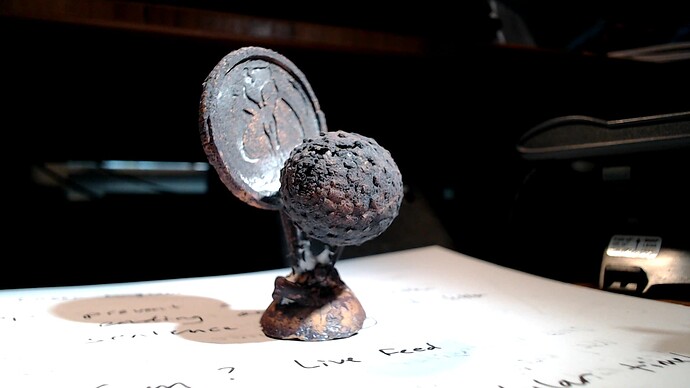 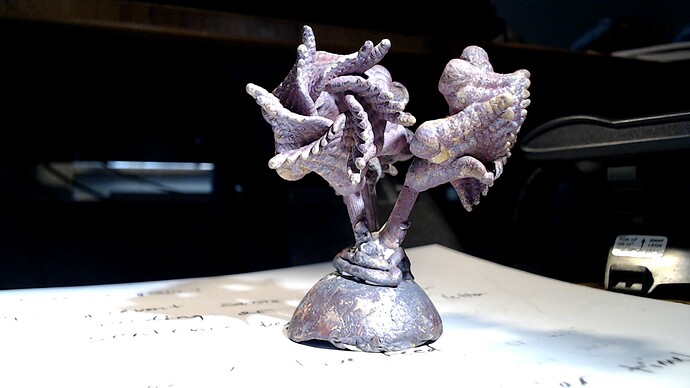 This was done on a MasterCast vacuum investment machine with perforated flasks.

However, when I peeked in before pouring, the metal was boiling and spitting. Rio recommends (in a thread on here) 2000 F for Ancient Bronze, so I was below that (though the pyrometer on the furnace might not be accurate).

Flask was pulled from oven and placed on vacuum caster immediately before pouring, and the vacuum was switched on a few seconds before pouring.

For the first piece, Coin and Egg, the flask was smaller (2 1/2" x 3 1/2"). We left it sucking on the vacuum for a while… maybe a minute. After that, we waited until the glow on the button was quite faint before plunging in water.

For the second piece (Spirals), the flask was larger (3 3/8" x 4"), and we vacuumed for a shorter time, and then plunged while the button glow was still pretty bright. The firescale seemed thinner on the second piece.

The scale is thick enough on the Coin and Egg that the surface is visibly pitted after removing the investment with ultrasound. I’m imagining that when we go to polish it, the results are going to be disappointing. I’ve actually seen LESS firescale when casting pure copper in the past. But that was with a centrifuge. This is my first time using a vacuum caster.

Are we missing something here? Would vacuuming way less produce even less fire scale?

Has anyone ever cast Rio’s Ancient Bronze and gotten scale-free results?

I have never cast bronze, but I don’t see any takers here yet, so I will make a couple of comments. Firescale implies burning in the presence of oxygen and a too high temp rather than a too low temp. I don’t think it’s your flask temp, because a too low flask temp would give problems filling the flask, and you don’t have that. If your metal is boiling and spitting, probably the melt temp is too high. Also, since your first flask has more scale than your second, could it be that the metal cooled slightly between pours and this is the reason for less scale in the second? I’d polish up part of your second casting to see whether it polishes up well with decent detail or not. Yes, possibly your metal temp is too high and the pyrometer is somewhat off, so possibly try another casting at a lower temp? Just some thoughts. -royjohn

I will definitely try a lower melting temperature.

Question: if I look into the furnace, and see it bubbling and spitting, is it “too late” already? I.e., is the metal already ruined? Or does the oxidation only happen during cooling in the mold?

So if I see it bubbling, I should turn the furnace down a bit, and wait until the bubbling stops before pouring, right? After all, this is a graphite crucible, so it should be a reducing atmosphere while the metal is still in the furnace.

if I look into the furnace, and see it bubbling and spitting…

Two things about that make me uneasy.

I hope you are not looking down into the electric furnace directly. I look into mine, but I use a small mirror to see into it. I hope that is what you are doing.

I’ve melted a lot of silver, and some bronze, and the only time I ever saw ‘spitting’ was when I poured additional casting grain into already molten silver. I had a Vesuvius eruption, likely from some residual moisture in the grain. Very spectacular! I’m assuming you are not talking about something like that?

Zinc has a low melting temperature, and according to Wikipedia, boils at 1665* F. Zinc boiling off would be my best guess as to what you are seeing.

If you use a mirror to see into the furnace’s crucible, and you see the metal is molten, why wait for it to get hotter? Add a pinch of casting flux, stir with a graphite rod (in a gloved hand) and pour it when the metal is ready. Don’t wait for the furnace display to read a specific number, and don’t give any zinc in the alloy time to boil away.

Molten metal should not be boiling or spitting.

Well, I was wearing shade goggles… but yeah, I should get myself a mirror!

Since melting the metal takes a while (20-30 minutes), I’m not watching it like a hawk, but milling around doing other things, and checking it periodically. I checked it after a bit, and oh my, it was boiling.

And yeah, it could have been the tin boiling off (this is Ancient Bronze from Rio)… And my castings look quite “copper-ish”, and the firescale reminds me of what casting in pure copper can look like. And very different from the “golden” color of the casting grain. So maybe I did indeed lose my tin.

I didn’t see a melting temp in the Rio blurb, so I looked at the MSDS and it showed a melting temp of 900C to 1000C…1000C is about 1955F, so, given that in standard jewelry casting you go a bit over the melting temp, your 1931*F doesn’t sound too high. The composition of the Ancient Bronze does not include and zinc, just copper and tin, so zinc is not boiling off. I didn’t see any references to overheated molten metal boiling and spitting…just references to moisture causing that, as Neil said probably happened to him. IDK how this would lead to oxidation, because I would think the moisture would boil off quickly and not even do anything by itself to the bronze surface or the investment. But I’m not an expert on that. If I were you I would try finishing the second casting to see how it looks. If you try again, be aware that molten metal for casting needs to ball up and spin around easily and form a ball the way water does on your freshly waxed car. It may be that all you did wrong was to have some moisture or impurity in the crucible or grain or in the oven which ended up in the casting.

It’s a trial and error process, so I’d look on line and at Youtube, where I found at least one video of casting Rio’s ancient bronze. The surface of that (“The Rat King” sculpture) looked deep brown in some spots like your coin, so I wonder if that’s just the nature of the case…perhaps it doesn’t cast detail well? You might also try calling Rio, because they should have somebody on staff who is familiar with how this casting grain works and casts. It might be that you will have to use a different alloy to get the detail you want. Good luck! -royjohn

Pardon my misplaced italics, which came from using the asterisk…I can’t seem to edit it out or figure it out…-royjohn

This from Britannica: " Some modern bronzes contain no tin at all, having other metals substituted—such as aluminum, manganese, and even zinc."

Any water would have been boiled off long before the bronze started to melt, assuming more metal was not added later, as I did that time.

That boiling bronze had to have looked interesting.
Neil A

Yeah, not anywhere near the boiling point of either tin or copper…

This was a brand new graphite crucible (from Stuller). I did let it season for a while at 300 C before putting the casting grain in. I guess there’s some chance that what I was seeing was bubbling gas coming up from the crucible itself, somehow.

And yes, that Rat King ring video… his immediate results look pretty much exactly like mine, covered with oxidation. Maybe it’s just the nature of the alloy. I’ve ordered some other bronze alloys to test, including Herculoy… I’ll see if I can get some better results with something else.

Well, duh, water boils at 100*C, so there couldn’t have been any water…my bad! I apologize for muddying the water. The ancient bronze is just copper and tin, 90/10. It does give a brown patina which Rio says to remove with a pickle or mechanical means. I looked at several videos of bronze sculptures and none of them seemed to have a lot of surface detail, so perhaps bronze is not the best medium for coins and small jewelry castings. Rio doesn’t not the use of flux with electric furnaces, but you could ask them about that. Ditto what they recommend for brass/bronze coins and such with detail. If they are selling it, they should know…-royjohn

Quite right - the uniquely huge gap between melting and boiling temperatures of tin are why molten tin is used as the substrate in the manufacture of plate glass.

… none of them seemed to have a lot of surface detail, so perhaps bronze is not the best medium for coins and small jewelry castings.

My experience with Rio’s ancient bronze is very limited. I cast a half walnut shell as an exercise and the detail was flawless inside and out. The casting came out clean and areas had a bit of iridescent color to them. Chalk it up to beginner’s luck, but clearly it can be done.

I was taught to use a pinch of Matt’s Casting Flux, always have with my electric furnace, and am sure I did with that walnut shell casting.

When do you throw the pinch of flux in? Right before the pour? Do you stir it quickly and then pour?

I was taught that when the metal is ready to be poured, drop a pinch of flux into the crucible, stir with a graphite rod, then pour. No delay, no rush.

I’m by no means an expert; I’ve only done about 14 castings with bronze, 10 of them with Rio’s ancient bronze. My results were varied. It seems to me that the ones I did with centrifigal casting turned out better than the vacuum cast ones. Maybe it was because flux was used with them, and wasn’t with the vacuum cast pieces.

I found that even with goggles, my eyes were really bothered by torch melting the bronze and went over to electric crucible melting and my results deteriorated. I’m definitely going to try the addition of flux the next time I try this.

I said this in a previous post, and I’m going to say this again; be careful to only use good graphite crucibles. The high temp of melting the bronze really takes a toll on them, and one of mine had the rim deteriorate and it actually slipped through the tongs and fell on the floor with about 5 ounces of molten bronze. If I hadn’t had everything down on the floor when I cast it would have been a dangerous and painful experience. I only melted the glaze off of my ceramic tile instead of melting me.

Also, it’s been my experience to let the bronze cool down a lot longer than silver. It can crack if plunged too soon. I wait until the color is gone now.

These are brand new graphite crucibles from Stuller. I’m keeping an eye on them for wear.