Enameling without a kiln

can I enamle copper disc’s with my torch? Is it possilbe to us
ancient techneques with out a kiln, and what are they? thank you

Try it! I used to play with powdered enamel on copper pennies and it
worked fine with my propane torch. Maybe not High Art, but I did
make some cuffinks and tiebars that way.

Experimental, but try this
http://www.ganoksin.com/gnkurl/1i

if it’s small enough, yes. You need to be able to get even uniform
heating, and with larger disks, especially with smaller torches, this
would be difficult.

Um. The ancient techniques kind of ARE a kiln, or an open hearth
fire (like a charcoal grill setup…). Before torches, a lot, if not
most, soldering was done with what amounts to a furnace, which is
pretty much a kiln. Just not an electric one. Charcoal fired furnaces
get higher temps than the open air non-enclosed versions, and will
tend to give more even heat. You’d be surprised at how recently these
methods were (or perhaps still even are, in some parts of the world),
not just ancient techniques, but still used and current ones. Even in
the so-called civilized world. I have a book by George Gee, a
goldsmith and author well known as an expert around the time his
books were published (around 1900 or so. Being too lazy to pull it
off the shelf to look…

) It gives nice instructions on how to
design, build, and use what was at the time, the standard heating
method, a goldsmiths “hearth” furnace. Kind of like a fireplace
design, enclosed on most sides so as to give the chimney a good
draw. Used for all sorts of things, soldering, melting metal,
enamelling, etc. And if you think about it, even modern blacksmiths
often use pretty much the same technology for working iron. The only
thing modern technology added to this, as far as enameling is
concerned, is powering the furnace with electricity instead of coal,
charcoal, or coke. And that is more a matter of convenience and ease
of use than it is a technological advance in how well it works to do
the job. It would be a fair guess that all those wonderful Faberge
enameled pieces were not done in electric kilns. That’s already into
the 20th century. Would you call that ancient?

One of the fun things about jewelry making and metal work is that,
although we have our nice modern tools and engineering available to
us, as often as not, our methods are not far removed from how these
things were done even thousands of years ago. Some of our tools are
new and improved, but just as many are only modern versions, and not
always better ones, of the same things used in Roman times and
earlier, sometimes much earlier. One of the neat things about the
field is that when you go into a museum and look at ancient
archeological examples of ancient metalwork, you often can see that
those craftspeople were thinking about how to do the job in much the
way we still do, and often their solutions seem just as logical to
us now, as they did to them, back then. While there are many times
where we may not know exactly how they did a thing, or may marvel at
how they did what they did with the tools and knowledge available,
there are also many times when any well trained jeweler or metalsmith
can look at such things and have an intuitive, pretty good idea of
just how it was done, in part because that’s how we’d do it, and the
methods were just as available then, sometimes with only minor
differences. Those folks had two hands, two eyes, a brain, and a
heritage just as we do, and metal is still metal, as it was then, so
the differences in methods used are often only in the details.

The quick answer from this non-expert is yes. I torch enamel silver
and copper quite a bit with good results. Having no kiln myself,
I’ve no frame of reference to compare to but I’ve been very pleased
with the results. Temperature uniformity and control seem to be the
key to good results. Small items I just place on a wire trivet and
heat with a propane torch, or sometimes two at once. I’ve also used
firebricks to build a small enclosure and used indirect heat from an
oxy-acetylene torch with a big rosebud tip.

Here’s a link to some on this site about torch firing.
There’s a lot more so do a search. When you come back with more
questions, these people do help, be specific in your details. You’ve
got a torch…what kind of torch? 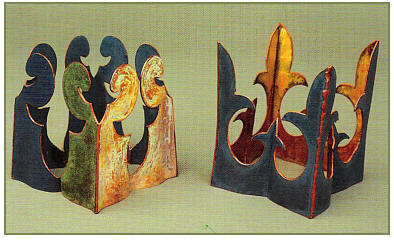 This article discusses about torch firing and the tools and materials needed as well as firing and design. Read on for more details.

you set up a sort of hearth where your mesh - the sort used in a
kiln, or any reasonably sturdy steel mesh- is supported high enough
to get a good large fluffy flame underneath the piece to be
enamelled. Bring the flame in gradually, watch the enamel melt. Torch
firing has a big advantage over kiln firing in that you can see
moment by moment what’s happening.

Do not let the flame touch the surface of the enamel, unless you
want shiny burnt black effect.

There is a traditional firm in Birmingham where very complicated
regalia and medals are all torch fired.

They use a very big fluffy flame about 18"/ 45cms away from the
piece.

With copper, you can counter enamel first if necessary, but of
course this will burn to black - but should still adhere through at
least a couple of torch firings.