Elsa Peretti Bone Cuff how is it made

Hi all, I am wondering about the construction details of the Elsa Peretti bone cuffs in silver there are a large and small version 4.5 and 2.8 ounces for the small. I am referring to the silver ones.
Are these castings? What are the thicknesses of the metal?
The edge of these cuffs are thicker and rounded and appear to be about 4mm thick? I am wondering if these are castings, what do you think the thickness of the rest of the cuff is? How thick would it need to be for a successful casting and use.
Thanks, Bruce

Just a guess: die struck, finished, marked and then formed into a cuff shape…Rob

A customer brought a Bone Cuff to me to size down. She had inherited the bracelet. I told her I couldn’t do it and I told her what it was. She seemed unimpressed by the name.

I too think it was die cut and finished.

I would be surprised to find out it is die struck, but I guess it could be? Any one o the forum know more details about its construction?
Thanks

Found this:
The cuff is stamped flat in two parts, the top and underside, each part then brought round or hammered to shape and soldered on the rim.
I wonder if Tiffany still has it produced this way?

I would love to know. I own one and I have to say that it feels very light almost like it’s a resin or plastic. It also has a hollow feeling that metal does not. I know it’s not plastic but I’m so curious to know the process…

it is made from two pieces an inner and outer that start out as flat sheets, that are pressed into shape, and then joined geometer at the seams that are then smoothed out, so it is hollow. Nice construction process if you got it. But a bit limiting of the types of forms you can do that way, but its great for that design.

I am trying to reconcile the weights given for the pieces with the object being hollow. I make a lot of solid cuff bracelets some of them are fairly large. None of them weigh 4.5 or even 2.8 ounces…Rob

imorphic what is a geometer?

Hi again every one, I got the info about how the piece is constructed or was constructed at some point from the British museum that has then in their collection. They explained the process that was used by a silverware company in Padua Italy that was making them. 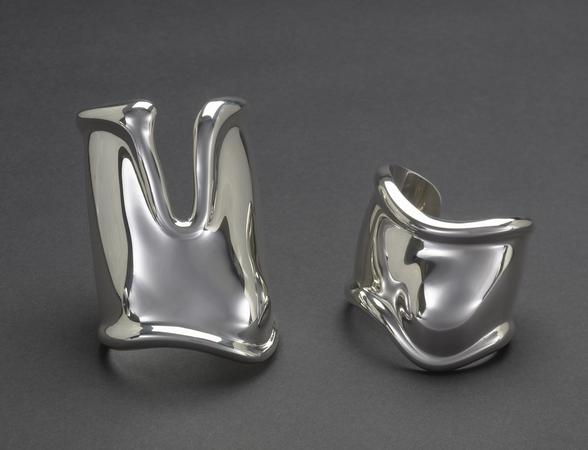 Silver cuff bracelet, designed to be worn on the left arm. Raised rim at top and bottom, the upper edge with a V-shaped cut-out, while a domed area on the lower left-hand side is designed to fit over the wrist bone. The cuff is stamped flat in two...

Remixner :I am wondering if you got correct info from Tifanny? Could be the person on the phone at customer service is wrong. As far as the weights for large silver cuffs I am talking like the size of the large bone cuff, I have been doing some 3D sketches and finding the cubic centimeters really pile up quickly. I have been having a hard time getting the size and forms i want and keeping it at 12 cubic cm which is 4 troy ounces. Looking at what I sketched and comparing it to the large bone cuff , If it were solid it would have to be a thin casting like 1mm maybe in the center areas, I wonder if you could cast that form that thin? The reason I was wondering about the Peretti cuffs is because I was thinking about the viability of solid cast silver large cuffs in general. I figure they probably need some heft because of the perhaps brittle nature of a casting. So they are kinda like a bangle with a gap, you don’t flex it you don’t reshape it you just slip into it and let it hang there on you wrist. I thought the Peretti cuff was a validation of this type of structure, and was like woopie! I could cast some large pieces as long as I kept the weight reasonable for the wearer and had good castabel cross sections as far as metal flow goes. But then I found out the cuff was stamped and realized yes this is probably the best way to make the a large silver cuff. If you do go soild you start to have to wonder how thin you can actually cast a larger bracelet like that, and then you also wonder about strength issues. Finally, MSJWLRY, a geometer is word my hands created on my keyboard when I wanted to write the word together.

These are the type of things I would like to cast, but I have not spoken to a foundry so I am not sure it it is feasible, this has a cross section of about 1.5 mm. But it is a lot overboard in size, as far as silver weight would be 55 cubic centimeters or 18 oz! So way to heavy, and I think you most likely could not cast it any thiner than 1.5mm? What do you think a viable candidate for casting, if re- designed down to a wearable weight? or really not appropriate? 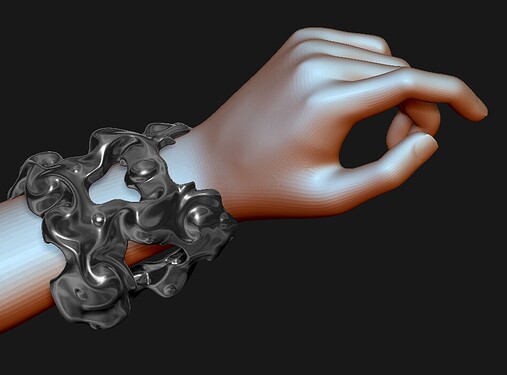 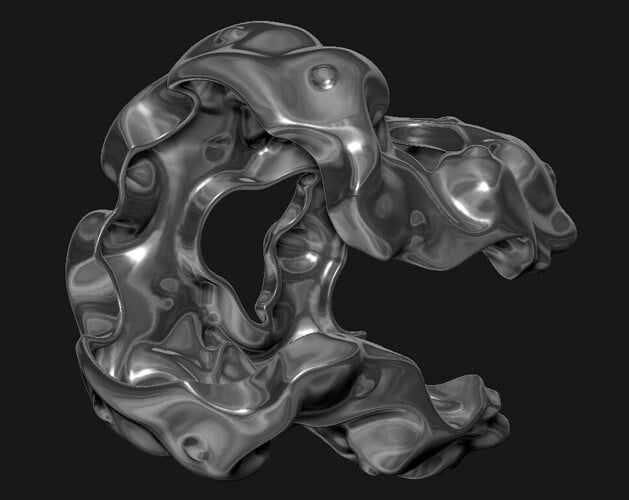 When I chatted with a Tiffany’s representative, I asked if the Peretti bone cuff is solid metal or hollow. They said solid. That is all that I can report. Give it a try yourself and see what they say. You may get a different story. Look at Native American jewelry for examples of large cast cuffs. Years ago they were gravity cast into a design carved into tufa. 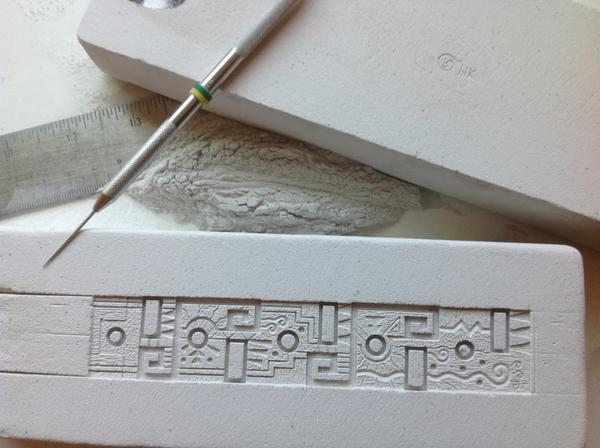 Native tribes in the Southwest have been creating ornamental jewelry for many hundreds of years. Before the Spanish ever arrived, these tribal artists had mastered the art of heishi bead rolling and lapidary. However, it was not until the 1800s that...

Cast metal can be very brittle and cracks can happen when a cast object is bent or forged. A die struck object is less likely to crack. Good luck with your project, it looks interesting. Remember that a piece of jewelry has to be comfortable, safe to wear and secure as well as artistically pleasing, otherwise it won’t be worn…Rob

This topic is fascinating to me. Thank you for all the info.
When I finished my jewelry making coursework at FIT I realized I could cast anything I wanted. I created an Elsa Peretti Bone Cuff in wax and had it cast in 18 karat gold. My wrists are small and the final weight was almost 3 Troy Ounces. It came out gorgeous with a little porosity.
I love the cuff. The casting company allowed me to make one copy for myself but made sure I understood I could not make multiples.
Will try to send a photo.
So it can be carved out of wax.
Kind regards,
Lois

My grand daughter is about to start her freshman year at FIT NYC. Unfortunately, I could get her to major in jewelry. Will she be able to take a jewelry course or two if she isn’t a jewelry major? Thanks…Rob

Couldn’t get, not could get.

Greetings. FIT is a wonderful school. I call it a hot bed of creativity. After high school I was an enrolled student and studied apparel design. Went back in my 50’s to study jewelry design as a non-credit student.
I am sorry I do not know the answer to your question but I imagine that if she is enrolled in all the required courses she could add a jewelry class. When I went they had a wonderful studio and students could go there in the evening if they wanted more time to work on their projects.

Hope your granddaughter loves it!!

So do we. Right now she is thrilled…Rob

Unless things have changed drastically in the college arena, I would suspect that you could take a jewelry course even if that is your stated major. I went to Parsons School of Design and was a Fine Arts major, and back then Parsons and FIT had some connection and I took a jewelry course at FIT, but thought it was a very dogmatic limiting class and dropped it after a short while. It did not focus on technical aspects of jewelry production, and was a stupid lets be artsy type of affair. I guess if you know you want to be a jeweler you would slog through that type of thing. That was just one class many years ago, and there must be some good jewelry schools and classes out their but maybe not in America. But I have no idea so I should shut up about that.

Wow Ishiatsu thats so cool made your own solid gold bone cuff. How thick was the wall thickness in the center areas of the cuff? So I guess you set the gap just right so you can slip it on, and the gap doesn’t “get in the way” when you wear it. Does the cast gold have some flex and or bendability? I think that’s always an issue with metal cuffs is that the fit and the gap has to be just right, so I know that is why people size them with a little bend, so it is probably not a good idea if a casting is totally ridged.

Rmeixner, Yes I have seen the “native american” clunky cast silver stuff. I wonder if they are totally rigid, they kinda look it?

I think the bottom line is there is probably a sweet spot if you want to cast a cuff bracelet, that satisfies the equation of wearability and castability. The pieces I have in my mind right now, I think are out of that zone. Maybe not, but I don’t think I will spend more time looking into it now, I have a ton of other stuff going on, and only 40 years left to work on it.

perhaps you can look into repousse…?