A friend of mine has a ranch in Mexico that he recently found is rich with agate/chalcedony. He wants to wear this big hunk of stone around his neck on the thick cuban link chain he wears all the time. He decided that he wants it simply drilled with a bail large enough to remove it from the chain as he pleases. I’ve never drilled stone so I’ve read up on it a bit. It needs at least a 3mm hole for the 10ga wire I’ll be using and plan on using a hollow coring diamond bit. This thing weighs in at 3.50 oz! So my questions are…should I go a tad bigger in diameter for more bail wire clearance through the stone, and, with a stone this heavy, is there a risk of the stone fracturing at the hole over time? Thanks! 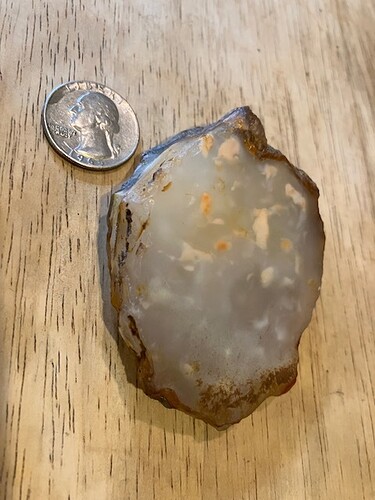 Also, am I limited as to the depth of the material that I can drill with a core type drill? Where I’ll be drilling is at least 3/8" thickness and there are no specifications on the depth limitations on the RG website

I have drilled smaller pieces of hard material like that in the past. My setup is a drill press with an old baking pan plumbed to spray water on the drill site. I support the stone on a piece of wood with a hole drilled in it to allow the drill bit to pass through. Easy and slow is what would work for me or I would fry the bit. That may happen anyway, so have some extra bits. The stone will fracture around the hole, so try to drill from both directions. I think that you should be able to buy 3 mm diamond bits that will allow you to drill a deep hole. Look at Kingsley-North if you don’t have a source. You can finish the hole with a piece of tubing that passes through the hole and then flare it out on both sides. If you do manage to cause some fracturing around the hole, you can add small decorative washers before you do the flare. Good luck…Rob

Make sure you go SLOW both in speed of the drill press & pressure to drill.
A drilled stone has a tendency to break out around the bottom.

Get an extra rock from the same guy of similar hardness stone to drill first.
Practice so you know what to expect.

You might also consider drilling a smaller hole into the edge at the top of the stone where you want the bail to be. Then solder up a heavy jump ring large enough to freely pass the chain through. Add a short piece of wire that will go into the drilled hole. Rough up the wire with diagonals and glue it into the hole orienting the jump ring correctly before the glue sets. You can get a bit creative with the bail design this way. I have done this with earrings and pendants and it works well. Just make sure that the hole is deep enough to get a good glue bond. I haven’t found 3 mm drill bits, so you may have to go with a core drill. They are limited in the depth to which they will drill. 3mm is just big enough for 10 gauge wire to pass through and may bind. You might consider a bigger hole to avoid this problem. Good luck…Rob

Thanks Rob for the direction to Kingsley North, I’d forgotten about them. I found this coring bit on their site which looks to be a tube, making (I think) the drilling depth greater than most. They are dirt cheap which doesn’t bode well for longevity but at that price I’ll buy 6! Only one review but it was 5 star. I’ve reached out to them on their site for confirmation of the depth limitations, so we’ll see!

Thanks Patty. I also thought about mounting the stone in Jet Set for the drilling set up because of the rough irregular back on the stone. It may stabilize things better and help prevent some of the breakout on the backside.

I haven’t used that style, but they look like they will work…Rob

Not a bad idea- you definitely want the back flat & solid against something.
And did I tell you to go SLOW & use lots of water.

Low in the water and slow on the speed…got it…thanks Patty!

Bruce, I have found that the core bits work much faster than a drill bit. Also, diamond coated bits last much longer than any non-diamond bit I’ve tried. I didn’t see this mentioned, be sure to flush the hole frequently. The bit will create sludge that will impede its own progress. Usually just lifting the bit out will draw the sludge with it. As you go deeper into the stone, you may find that running tap water into the hole will help clear the sludge. Good luck!