Hope this finds everyone well. I’ve been an internet lurker for some time and just joined the community this week, thanks for reading my first post. I came across a video on this subject and I’d like to share it as it might prove incredibly useful at the bench and I’m curious to see what conversation this might spark regards to its usefulness for protecting elements of a piece you don’t want overheated. I’ve only just discovered it and haven’t had an opportunity to try it myself.

Starlight is a puddy that is capable of resisting incredibly high temperatures while shielding anything behind it from the heat as well. In the video I’ll link to this fellow applies a torch to his hand, among other things, at length with nothing more than what looks like a bit of tortilla.

Starlight is the name given to the material by its inventor, there’s an odd story behind it and, secrecy behind it’s composition and it’s reasons for never becoming commercially viable but it’s become a bit of an internet phenomenon in the last few weeks after some one managed to create a facsimile and it’s spurred a lot of people to explore it further.

The first version shown in the clip below from Night Hawk Projects can be made at home using a bit of baking soda, cornstarch or flour and PVA glue as a binder. As a flame is put to the starch/flour creates a layer of carbon that deflects the heat while the baking soda produces CO2. He provides some explanation of the chemical mechanisms at work as he understands it.

A Super-Material You Can Make In Your Kitchen 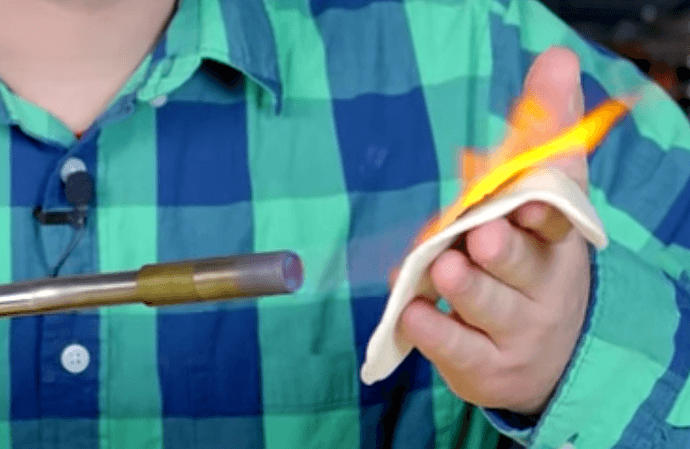 As just a new member of Ganoksin.com from 20 minutes ago, clicking on this video is the first action I made. And in my own opinion, it might just has repaid my membership for that solution against soldering a piece of jewelry set with, say, a pearl. The question is: it protect against direct heat but does this material protects from dissipated heat as we torch flame is applied on the ring shank in order to solder, dissipating the heat along the metal up to the heat sensitive material (pearl in that case).

This material does not conduct heat, thus it will not draw the heat away from the shank. You need something that acts as a heat sink, not as an insulator.
That said, if at all possible it’s always best to remove pearls before soldering. It doesn’t take much heat to damage a pearl.

I regularly use a hollowed out small (new) potato to protect pearls from certain death while soldering. Extra damp material to seal up all the cracks between the two halves. With several dressmakers pins to secure the halves together, the potato itself is quite handy as a dexterous holder while soldering. Primarily I work with large 13mm +Tahitian pearls. 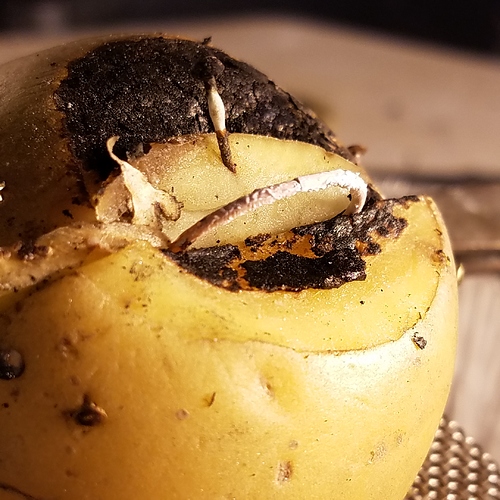 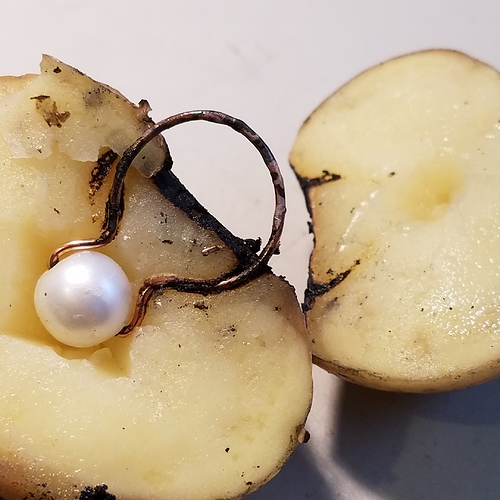 The person with torch against hand is braver than id be. The pearl and potato method ill have to try sometime. Thank you.
Aaron

there are a couple of inches between flame and hand. The potato remains cool to touch where the flame isn’t aimed. The torch is focused at the joint to solder, parallel the top seam of the potato - not at the in seam. It’s shooting into space, past the potato and embedded pearl. I’ve gone thru a couple of bags of potatoes soldering, and never felt the hellish wrath of my torch. I’ve also used it on really nice rings with tourmalines and emeralds.