I’m making a pair of cufflinks for a client and have a question in regards to the hinge style back seen here: 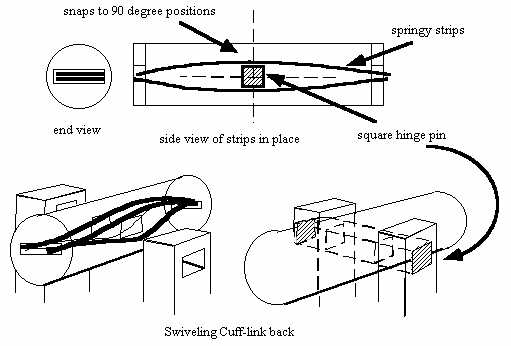 
Is there a reason to incorporate a type of spring for tension to make the cufflink more secure, or is a snug fitting hinge enough? Never made cufflinks before, and the face of the links I’m making is a little bit larger, so I want to make sure they’re not going to want to jump from the sleeves or wear funny.
1 Like
Elliot_Nesterman December 18, 2016, 3:41pm #2

The spring in a sprung cufflink back is for convenience, not security. Once the links are through the button holes they are not going to fall out of their own accord. The pressure of the cuff against the front and back keeps them from turning. But it is easier to put the links in if the back stays parallel to the shank and rigid while inserting. If the back flops around it’s a bit more fiddly to get through all four layers of the cuff.

Thanks for the input. So it sounds as though it’s actually a bit snug once the cuff is sandwiched between the two sides? Or even moderate outward tension from the sleeve is enough to keep things in place?

I really need to get a shirt and test some out…

If you’re going to make cufflinks you must have a French cuffed shirt to test them.

Another thing that I had to learn when I started at the bench was to be able to tell the proper pressure for an earring clip, something most male jewelers won’t have experience with when they start in the trade. Even men who wear earrings generally have pierced ears and so are unfamiliar with how much pressure the clip needs to be secure without hurting.

Much appreciated information Ajoure, thank you.

My husband has never lost a cufflink, but he loses stud buttons while wearing them.

I know they are secure when he gets dressed, because I insert them.

They have a spring similar to cufflinks, which appears to be working.

Are studs designed to be frequently replaced jewelry or is there a better mechanism for security?

There are several type of stud backs. The most common ones today have a telescoping tubular back with a spring. Then there are the type with a pair of spring folding wings. The third has a u-shaped spring which hinges on an oval back.
How secure each is really depends on the size of the buttonholes they go through. Smaller buttonholes are better, but these days most are larger so that buttons on a bit of twill tape can be used in lieu of studs.
And, no, you’re not supposed to replace them regularly. At least, not ones that are fine jewelry. That would get pretty pricey.

Here are photos of the three types on one page.
http://www.hfindings.com/typethumbs.cfm?CategoryID=17&SubCategoryID=86&TypeID=0

Thank You @Ajoure.net
Here are some from the website you referenced: 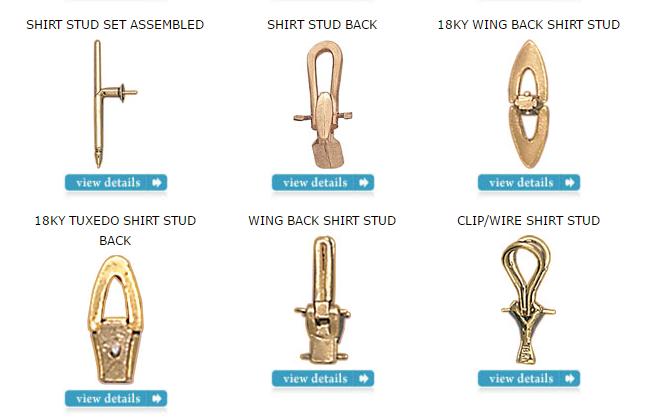 The first one shown is the telescoping tubular one I’m complaining about.

The other ones look alike in that they seem to have wings, except the tuxedo stud back looks like it only has one wing. Where is the spring located in these winged mechanisms?

Does the security of the winged mechanism depend on the second wing staying locked down until the first wing is released?

Having big buttonholes probably requires the ornamental part of the stud to be as big as the buttonhole, just like ordinary buttons and buttonholes. But I’ve seen big gold studs in action, and don’t think they enhanced the overall look of the monkey suit. It doesn’t seem like 3 studs would make that much of a difference.

Maybe reducing the size of the buttonholes would be a loss prevention solution, other than buttons on twill tape which is still a size issue, and if he lost the entire tape he’d be styling his wife-beater between the bow tie and cumberbun.

Back to the original topic,
here are some images of different cufflink mechanisms

Cufflinks. Wearing cuff-links allows a man to to stand out in a very discreet way.  It's technically male jewelry, yet it serves the functional purpose of holding your cuffs together. You can create a statement by accessorizing a casual outfit with...

Generally the wings are springs themselves, and bear against a tube with a détente, the way omega clips work. The last one is a double omega clip.

In this image you can see out the spring half of the back sets in the groove in the body of the back. It snaps into open and closed positions. 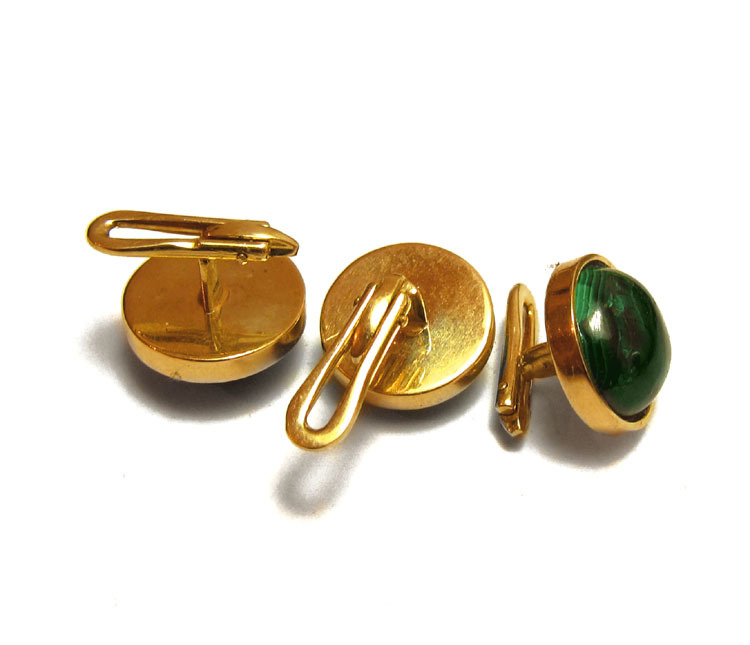