Coat of Arms vs. Crest - Terminology

Not to teach my grandfather how to suck eggs, but as I’m sure you’ve been told any number of times by heraldists, the bas-relief on the platter is a coat of arms, not a crest. More properly a full achievement of arms.
That aside, this is a very beautiful emblazon of the arms of the Worshipful Company of Haberdashers.

People using “crest” to mean “arms” is one of the pet peeves of the heraldic community.
The crest, for those who may not know, the crest is the bit that sits atop the helmet.

I am sorry if my words upset anyone, I just typed what I thought was understandable. I have been making coats of arms for over 50 years now. Actually my end of apprenticeship masterpiece was this badge, which is mainly a coat of arms that hangs on a sash. 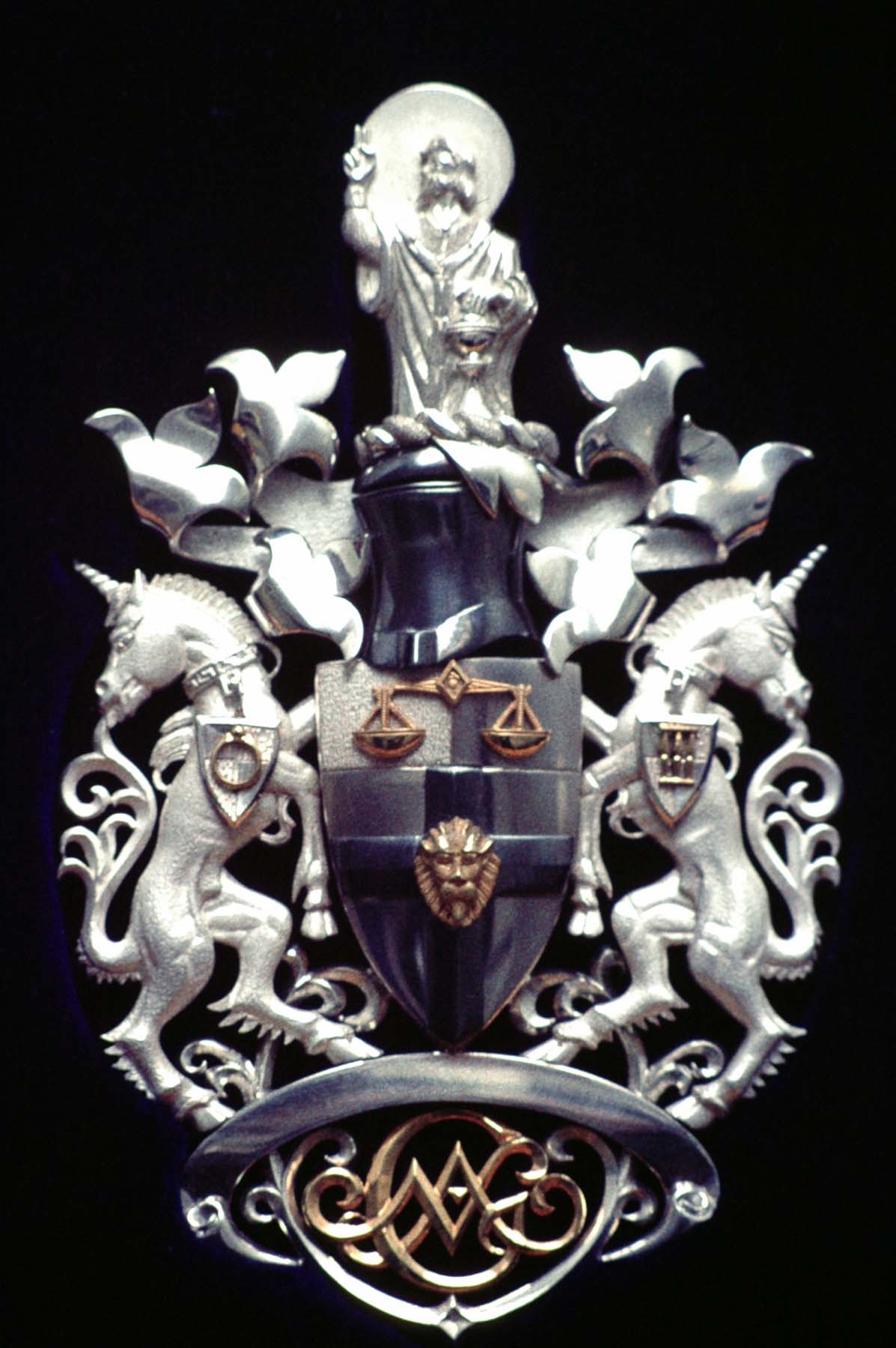 I don’t think anyone was upset, I certainly wasn’t and am not. Speaking only for myself, not the entire heraldic community, I view these sort of nomenclature missteps as teachable moments.

For instance, the term badge means different things in different contexts. A badge, as used generally, is a physical object that denotes, or confers, a certain authority or association; as a police badge or the beautiful badge posted above. However in a purely heraldic context a badge is an associated emblem, not part of the coat of arms proper, which is used to mark one’s belongings and can be worn by one’s retainers and followers to denote being part of the household or in some other way aligned.

A badge does not necessarily have to be adapted from any part of the arms, and historically was not. Badges are personal and while heritable can be discarded at will and new ones devised. Badges were used predominantly by the great houses of Europe as a means of making a personal reference as opposed to family reference. Richard III, for example, bore the royal arms, France modern quartered with England, but used a personal badge of a white boar. Here’s a nice article on Wikipedia about Richard’s white boar badge.

The White Boar was the personal device or badge of the English King Richard III of England (1452—1485, reigned from 1483), and is an early instance of the use of boars in heraldry. Livery badges were important symbols of political affiliation in the Wars of the Roses, and Richard distributed very large numbers at his coronation and the installation of his son Edward as Prince of Wales, for which an order of 13,000 badges in fustian cloth is recorded. Edward appears to have shared use of the bad...


Perhaps the most famous badge on the Continent is the crowned salamander of Francois I. You see it carved in stone at Fontainebleau and other chateaux built by Francois and on many objects created for him. Here is a cannon given by Francois as a gift to the Ottoman Sultan. Note the crowned salamander badge cast into the barrel and the forepart of the barrel covered in fleurs de lys. 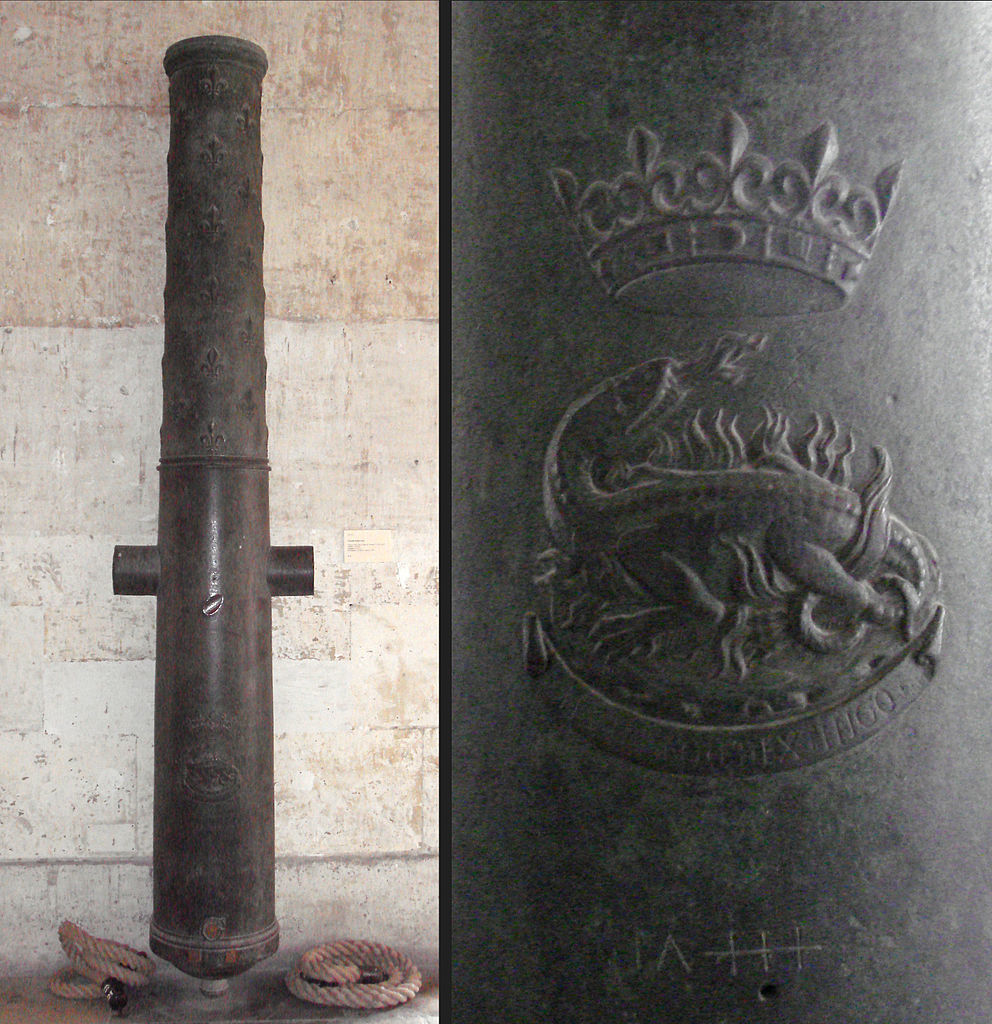 I spent the first 14 years of my career making regalia for Garrard the crown jewellers and Asprey in London, so a lot of heraldry was involved. I made mayoral civic regalia for many English councils and also UK orders and decorations, orders from CBEs up to the Order of the Garter, Field Marshals batons and a lot of other regalia around the world. 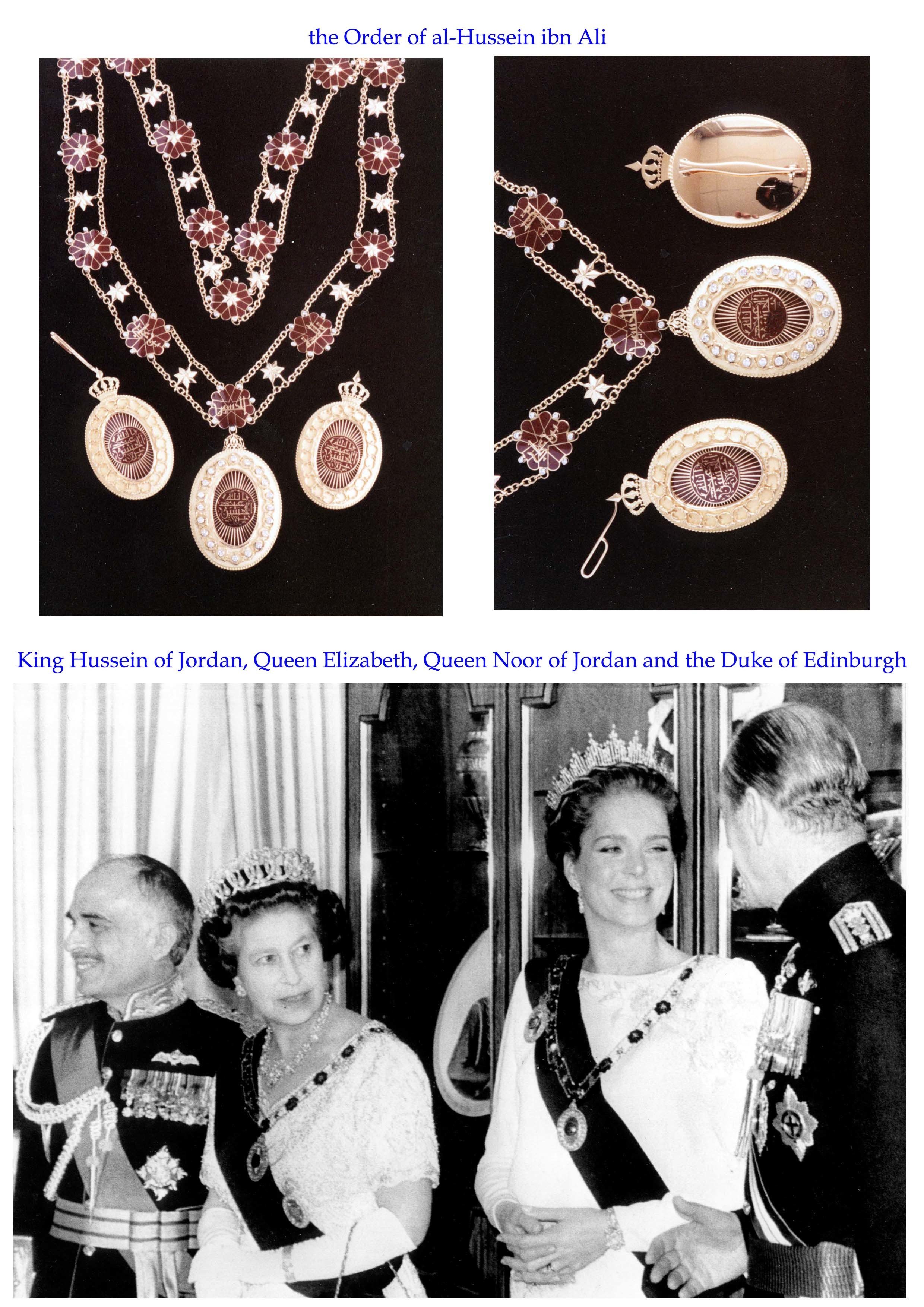 Sorry to have shifted the topic of this thread from scratch brush units to my regalia and badges. I get a bit carried away when I start posting my photos.
It’s an age thing!

But scratch brush units are a must when finishing regalia.

James, I admire your work,. Whether it is a Crest, Badge, Sigil, Coat of Arms, I don’t care. The work is stunning.

It’s that common language thing I’m sure. After all, in New York State we think pudding is made with Butterscotch.

This is a wonderful discussion including the deviations from the original post, and all the photos are most helpful.

Initially, using the scratch brush for finishing and burnishing made sense, but now I understand the cleaning and polishing aspect especially of textured plated items.

The top most item in the second photo of the order of al-Hussein ibn Ali, looks like a brooch, but the pin on the back looks too wide to go through fabric.

Does it attach over the chain as shown on Queen Noor, up closer to her shoulder?

And Queen Elizabeth is wearing something similar, which appears to be attached to the lace on her dress.

Betty, the pins on the back of this type of regalia are all this shape, they are meant to be worn on a sash or on a dress uniform and the place where they are worm regularly has a special stitched loop added to the sash or uniform. All British regalia such as KBE,KCB.GCB stars etc. have a similar brooch pin on their rear. This is a KCB star. 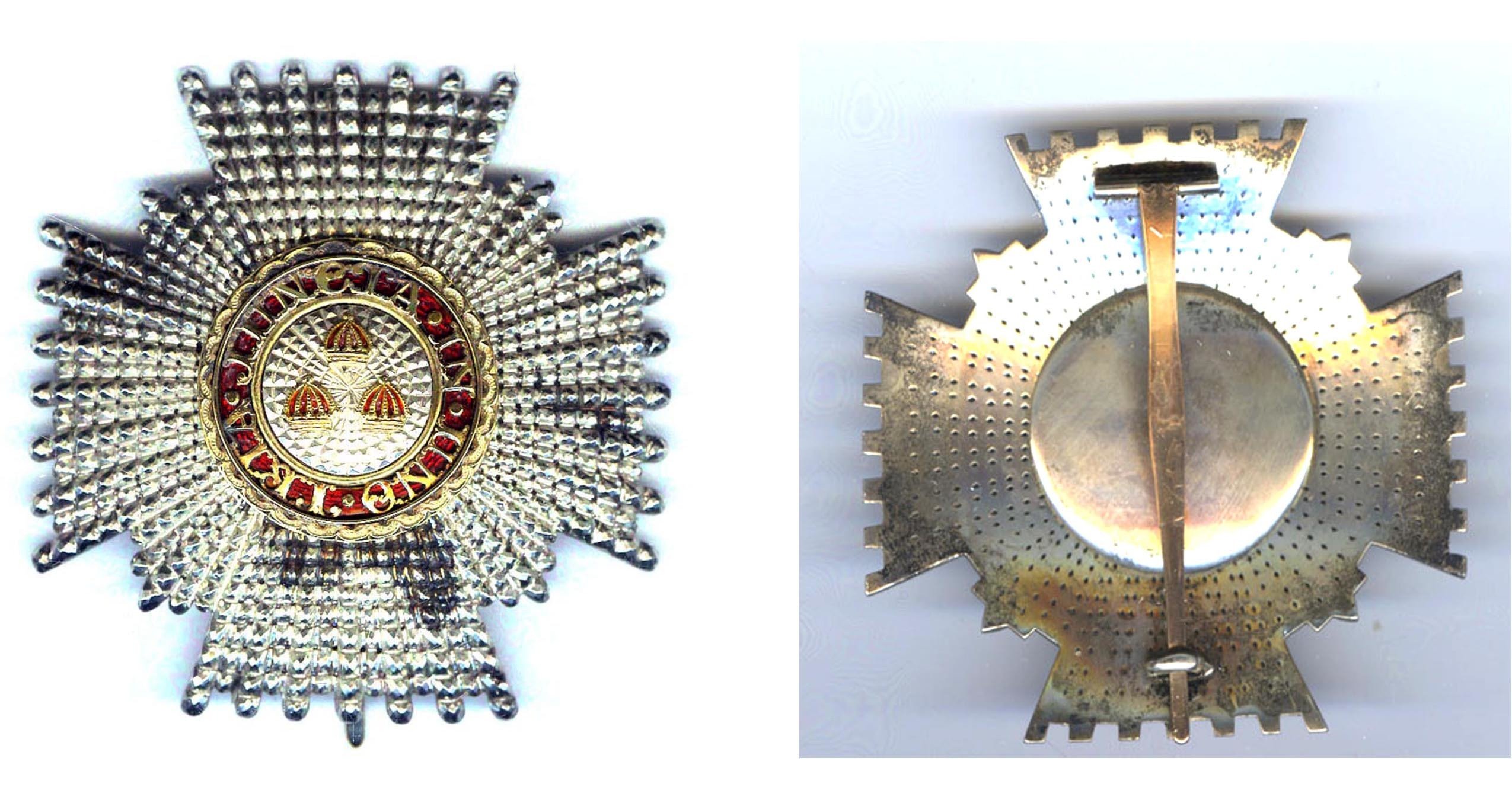 Maybe it’s time to start another discussion because we’re getting away from the scratch brush topic.

If you live in the US, or indeed anywhere outside the UK, Ireland, and the Commonwealth, there’s no reason you can’t design arms for yourself, then to be inherited by your children.
That said, designing really good arms is something that takes quite a lot of study, as well as a generally good design sense.

Can you please share a picture of how these hang on a sash? This is amazing work!

Here is a pinterest board showing order badges on sashes. Note that the badge is worn pendant at the hip. The order’s star is generally worn on the left breast of the formal coat. 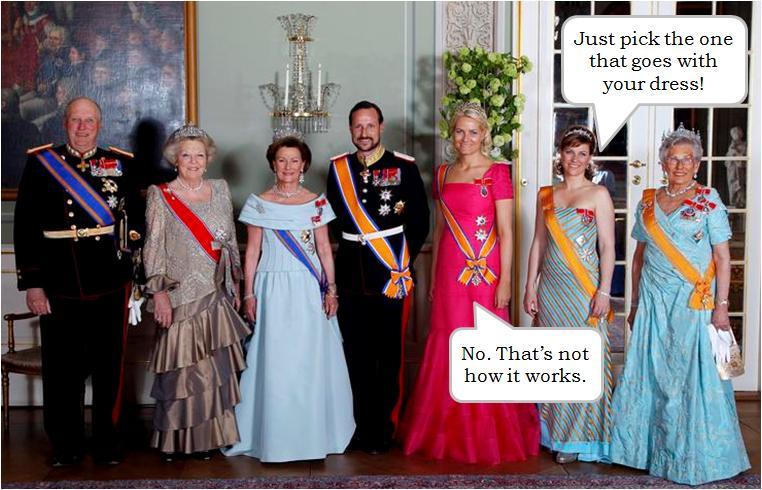 Here are some more photos of the civic regalia I have made during my long career as a goldsmith. 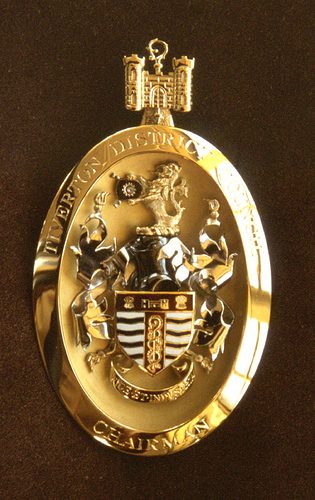 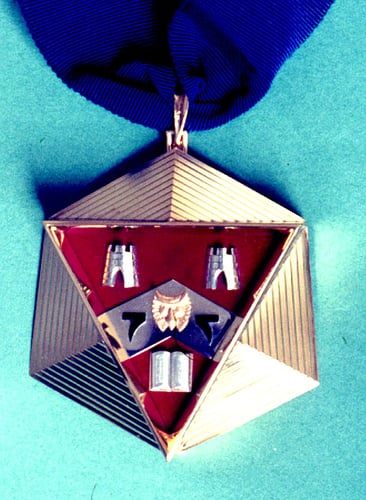 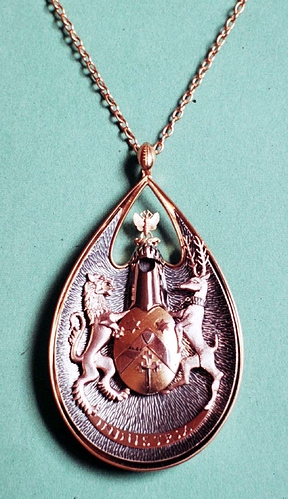 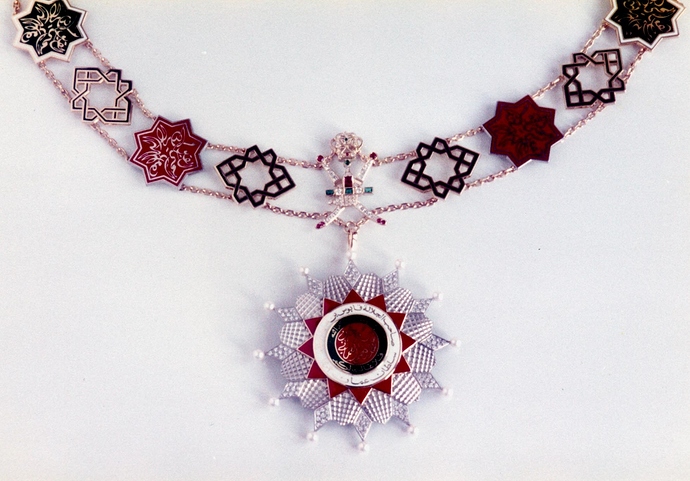