For context I am learning silversmithing at home on my own, with 99% of my information coming from online resources. This tends to lead to some gaps in my general knowledge, and I think I’ve tripped on another one. Thanks for bearing with me.

I get what filigree, and specifically Russian filigree, is- the very delicate lacy open stuff with the twisted and flattened wire. Got some wire, planning to try it, but that’s different from what I’m after.

What I’m currently doing- and hoping to learn more about to refine my skills, hence this plea for help- is using bits of regular round (and sometimes square or bead or twist) wire to create designs, soldered to sheet. The photo below is one of my early attempts and I think gives a good illustration of what I’m after. 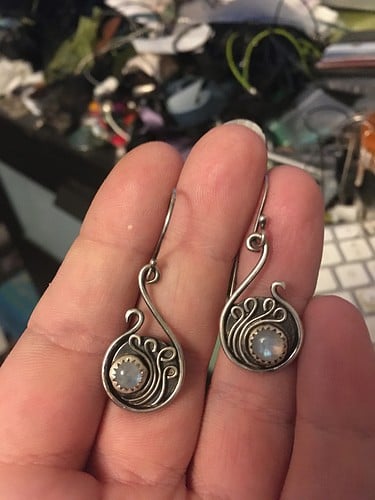 Is this still called filigree, or is there another word for it? I often see jewelry for sale labeled as “Bali silverwork” but it seems like that’s just referring to the location and hasn’t yielded me much in the way of building my skills in creating similar work.

If anybody knows of any good resources on whatever this is I’m trying to do that would be fantastic, but just knowing what the heck to google would be a big help, obviously!

These are very pretty. “Wire appliqué” is how I’d describe them.
Try to expand your sources for stones. Dealers with more extensive inventory will have pairs of stones that are the same size.

Oh definitely- these were some cheapies for playing around. I’ll try “wire appliqué”, thanks.

About a year ago I developed an obsession with filigree. I found a lot of resources on ganoksin that helped me figure out what it is and the rudiments of how to make filigree. Filigree, at least for me, is the application of very simple tools to an often frustrating process of joining tiny pieces of fine and sterling wire in ways that produce pleasing shapes. Traditional filigree such as Russian filigree has its unique design details as does filigree from other cultures. The history of filigree is especially interesting. If you don’t already, you will need to learn to draw very fine gauge fine and sterling silver wire. This too is fairly easy once you figure out how to taper a piece of 20 gauge wire so that you can continue drawing down to 26 gauge or smaller. It helps to have a rolling mill to flatten the filler wire once it is twisted and make frame wire, but the rolling mill isn’t essential to the process, just makes it go faster. If you haven’t already, search on Victoria Lansford

She makes amazing pieces and her website gives you some other resources. There are also very helpful people on ganoksin who may reply to you inquiry. I have moved on to new obsessions, but I still do a little filigree once in a while. You can see it on my website. Having made heavy bracelets for 47 years, filigree with its simple tooling and very fine detail is an interesting vacation from the heavy work that I usually do. Oh, unless you are young with good eyes, get an optivisor if you don’t already have one. Good luck…Rob

Yeah I’m definitely waiting to attempt the traditional filigree until I can get my glasses Rx updated. My vision is pretty decent with correction but I’ve got zero depth perception and some hand tremors which can get… interesting.

I do have a nice magnifier with lights, very handy.

History gets muddy the further back you go as to when Filigree and its derivations came from let alone when. Today the Russian filigree is the best known. You also have the middle eastern style, Mexican, and Scandinavian. Probably many more, but if you find examples of each, they mainly fall into those catagories.

Alan Revere gave a lecture in class about when and where Filigree came from. It was more the style you posted the picture of without the backing plate. It started in a coastal trading center in So. Denmark. As the Vikings traveled afield some of the first they encountered were celts. You can see the strong similarity of Celtic work and Scandinabian art work. Fast forward to Elizabethan England and lack of money. It was too expensive to work in metal. Instead a newer material was substituted. Using long strips of thin paper quilling was born.

There was some dispute in an article my Russian sister in law translated for me. Vikings and Russian people were as friendly as enemies could be back around 800AD. During an extended stay in Russia both the Russian and Scandinavian versions came about. Who was first and taught the other is the big question. The only remaining examples of the Scandinavian version are in a museum in St. Petersberg Russia. Most metal work back then was overtime melted and made into something else.

BUT the middle Eastern version preceded both but not in the Lacey versions. Theirs is heavily rolled spirals wedged into the gallery wires. Middle Eastern is spirals of fine wires. Russian is delicate Lacey wires in gallery wires. Scandinavian is heavier wires that quilling came from.

Now Mexican, Latin American version has bits of all of these types, but for some of their work, they used a backing plate that the twisted wires were soldered to.

That’s as far as my research got me when I was prepping for an artist in resident doing stage shows for the Utah Shakespeare Festival. I did it for 10 years demonstrating both Russian and Scandinavian versions of metal Filigree work.

In the end it’s small twisted wires in gallery wires, or adhered to backing plates. Main thing is have fun doing what you like.

Aggie
Who took her first mini steps on reconstructed ankle.

Oh wow, thank you for putting in that much work!

I was about to say I didn’t realize the Vikings did filigree but then I did an image search and OH! of course! And that actually gives me a whole other direction to go in. I’m of Norwegian descent. My grandfather did rosemaling and I always regretted not learning it from him. Now this I could do.

Thanks again. You’ve given me a lot to look at and consider.

I’m new to filigree too, and have been attempting traditional Norwegian solje. I have a few resources for you. Jeanne Rhodes-Moen has written a book, Silver Threads:Making Wire Filigree Jewelry. Also, Vesterheim Museum in Decorah, Iowa has a Folk School and offers solje classes taught by Liz Bucheit of Crown Trout Jewelers in Minnesota. Rio Grande carries sterling filigree wire, but it’s not in their catalogue- you can find it online with this item # 100831. Hope that helps you!

Oh thank you! I think that’s the filigree wire I have, actually. I don’t have a rolling mill so I’m glad they offer it.

Thanks so much for the suggestions, and I’d love to see some of your work sometime!

btw, if you want to make your own filigree wire, a metal pasta mill/roller will flatten thin wire… in this case, two strands of 24 gauge, twisted and annealed.

Good to know! I have such a machine for clay.