I finally sprung for a membership here because I have a question which probably should be very simple, but I’m stumped. My $5 craft store nylon mallet is finally coming apart, and I decided I’d like to upgrade to a nice rawhide mallet. Thing is, I have no idea how to choose one. Rio offers either lead-filled or plain rawhide, and several sizes/weights for each. I understand the general concept of the lead-filled, but I’m not sure if or how it might offer an advantage over the plain. And once I’ve narrowed that down, how do I decide on weight? Is heavier better, or should I start with something in the middle until I develop my own tastes?

(For context I am in my second year of silversmithing, having learned on my own with the help of various online resources, books, etc. No access to in-person classes or mentoring for the time being.)

Thanks in advance for your guidance!

Ganoksin Orchid is one of most reliable sources of jewellery information. I for one, have been an author here for nearly 20 years. You made a very wise decision in joining ‘us’.
If you want some information on Diamond Setting. I’ve written a few (127) essays in my blog and many more to follow, I’m not bragging one iota!
We, “as a group”, are here to help you and everyone. Here is my blog address:
“gerrysdiamondsettingessays.blogspot.com”
Enjoy yourself…

“Gerry, on my insanely busy, iPhone”

Attached should be a picture of my rawhide hammer. It is at least forty years old. In that time I have made hundreds of heavy bracelets, each formed with this hammer. It is 10" long and the head is, or was, about 1.5" in diameter with no lead filling. I can’t imagine needing any more than this hammer. I will say that I have started to partially form bracelets on my hydraulic press using forming tools, but they are finished on a mandrel using this hammer. Good luck…Rob 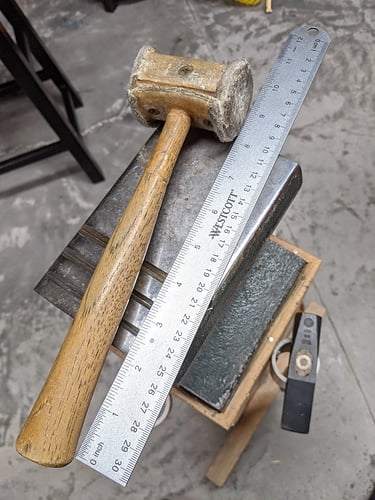 The cheapie on the bay, 1.5x3 inch head, about $14, shipped. The Garland, American made ones, about $25 to $40, depending on size. You choose…looks like they all would wear pretty well. When I pick stuff like this I am not snobby, and I figure I can spend $14 and leave the other $14 in the IRA to draw interest. If the cheapie lasts 8-10 years, I have doubled the $14 I left in the bank and can buy another with the interest. Even if it doesn’t, I’ve made enough stuff with it to pay for it…when you are a rich goldsmith you can buy premium tools just for the fun of it. You could also get a $3 rubber mallet or $6, 1 lb orange deadblow mallet from Harbor Freight that would do about the same thing. I do have two rawhide mallets, small and medium, but can’t remember where I got them.That’s my take, but others would do differently…-royjohn

If Rob says something works, then it does. For over 40 years even more so.

But the first time I picked up a rawhide mallet, 16 years ago in a classroom setting, it left some deep indentations in my silver, so that was the last time I used one, too. The other thing I noticed in the classroom setting was that the most that got made with them was a lot of noise. That was probably due to beginners using too light a mallet.

If I need more weight I use a 1 lb. brass mallet.

So about the marring I experienced. Do the faces of a rawhide mallet need filing, sanding to keep them smooth? Based on my one experience I have always wondered why people use them.

Neil…I don’t remember ever marring the surface of anything with a rawhide mallet as long as the piece was solid metal. As a qualification, most of my work is fairly heavy and solid. Certainly, if the piece were hollow, it could be dented with any hammer. I have always been tempted to try a different forming hammer, not because what I have doesn’t work, I just like to buy tools. I also have a short handled brass hammer that I use for stamping and moving heavy bezels with various punches as well as a longer handled brass hammer that I use when punching out discs with a disc cutter. Typically though I use my press as it will allow me to punch thicker stock and be more precise than using a hammer…Rob

Hi Jen,
I can’t help with the question about the rawhide mallet because I keep as vegan a bench as I can (who would ever think there were so many animal-derived products in jewelry-making?) but I can certainly say that, boy, are you ever going to love being a member and having access to the incredible minds and hearts here on Ganoksin!
Best,
Marian

I don’t remember ever marring the surface of anything with a rawhide mallet as long as the piece was solid metal.

I was working on sheet silver on a bench block. I probably should have taken it to the instructor for clarification.

No harm done as I like the plastic mallet, and I can claim having a vegan shop.

I read about this the other day, actually! Rawhide mallets come from the factory heavily glued and lacquered. Before using it you’re supposed to soak it in water for a couple hours, then beat on a bit of concrete or brick to break it in. From that description and your experience it seems like the mallet was too new.

Thanks for the input, everyone! Huh. If a super cheap plastic deadblow is going to accomplish the same thing for less money, that seems like the way to go. I definitely like the idea of having all of the traditional, professional tools… but I’ve also seen the price of silver lately. YIKES. Definitely rather put my money towards that rather than a pretty but not entirely necessary tool. I’ll probably still get it someday but for now cheap and functional wins out.

I agree that rawhide mallets need to be broken but I would discourage using concrete or a brick. That might result in embedded abrasive bits of grit that could cause finishing problems.

I recommend an anvil, mandrill, etc. wiped free of dust or grit.

Rio Grande has a video on YouTube on how to condition a new rawhide mallet: 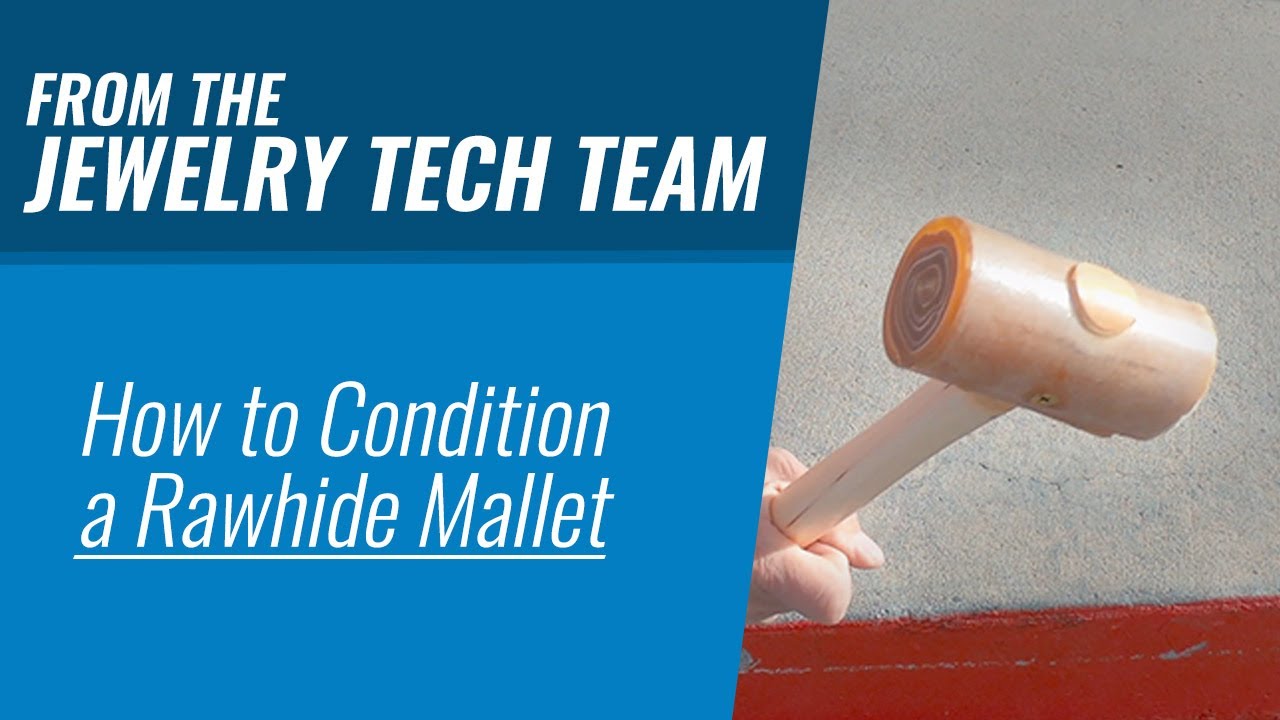 I recall instructions directing me to prepare the face of my rawhide hammer by carefully breaking the lacquer coating with a sanding drum, grinding wheel or just sand paper block. Oops, just saw the Rio video that was posted saying pretty much the same thing. It’s interesting to see the shape that a rawhide hammer takes over time. I am left handed and you can tell this from the way that my hammer is now shaped after years of use. I wonder if I would have trouble using a new one? This has been a fun discussion. Cold here in Central NY, but it is supposed to warm up in the next couple days. Have a good Thanksgiving, but stay safe…Rob

After 20 some odd years of using my 1st rawhide it assumed the mushroom head shape shown earlier in this thread. After visiting a friend’s leatherworking shop I found his mallet to be shaped exactly the opposite with a depression in the center from striking leatherworking tools for many a year. We traded mallets. It’s been another 20 +years and the woodwoking mallet has assumed the jewelers mallet shape. the leatherworkers leather handle wrap has stayed in place.

Ronnie Mares did a great job in his video. I have an easier way. If you have teenagers, undoubtedly they are going to have those opps situations happen. My daughter made it adulthood because momma did metalsmithing.

One of her re-education programs set up by me was conditioning a rawhide mallet. It took her most of a Saturday to get one surface filed a bit. Next morning when she was getting ready for church, she began to scream at the top of her lungs. The only shoes she had in her closet was a ratty pair of tennis shoes. Did I mention she loves shoes as much as Imelda Marcos? I told her until the mallet was fully worked in, that was the only pair she would have to wear. Surprising how fast she did a great job of pre filing. By this time she was good and mad at me. It took a few hours before I was satisfied with the results. I’m so mean I took her to the mall after school on Monday and bought her a new pair of shoes.

I’ve always said " A hammer, an anvil, and a blow torch are better than prozac if you have teenagers"

Aggie, sitting with my foot up in my new walking cast. Cant walk in it though for another 4 weeks, but its knowing its progressing that makes me smile

Years ago I took over a lapidary shop and didn’t have money to replace tools. I used a band saw on those mushroom ended mallets. After I got rid of the worst, I used a drum sander to finish it again. Make sure you are working alone and have the proper mask on. Got a few more years out of them.

I echo the conditioning of the raw hide hammer, but I never spent too much time on it and I went for a standard sized one that has served me well. However, I have also found that it is not tricky to make a basic wooden hammer of the right shape and size if you have a specific task (like anticlastic raising), just make sure you are using a hardish wood and hammering on the grain. You can use friendly plastic / polydough / polymorph to make caps for your metal hammers to give the right shape and weight for a project, and I’ve also just wrapped some 3mm leather over my metal hammer faces to soften the blow when in a hurry.

The idea of adding a covering to an existing hammer is brilliant! I do have some of the friendly plastic pellets, never thought of using them this way.