I am using a programmable kiln for casting. It is a Paragon Express
E16T. My casting buddy and I did our investing the prescribed way,
mixing it thoroughly in the allotted time. We then invested using my
vacuum caster–twice, once in the bowl and once in the flasks. We had
a total of flasks, per load. The 9 hour burnout schedule we followed
was the one recommended by Swest. We checked the temperature
regularly, and it was precisely as we had programmed it.

After burning out at 300 degrees for 2 hours, I removed the wax tray
and found only a really small smidgen of wax. I was puzzled, as there
was nothing to pour out. We were casting sterling, fine silver, and
sterling deox. We had used Matt purple and blue carving waxes, and
the regular red sprue wax.

After the burnout was completed, we removed the flasks and were
surprised to find that the investment was all blackened. We had
understood that this was a sign of an incomplete burnout, but to our
relief, the casts all came out perfectly, no pitting, no porosity,
just perfect. Some of the wax models were heavy ones, others very
thin, yet they all cast perfectly.

When the kiln cooled down I examined the floor of the kiln, and it
was perfectly clean–no sign of dripping wax. Where did it go?

We did notice smoke exuding from the vent during the burnout, but
thought this was normal.

Is it normal for the wax tray to just have a smidgen of wax in it–
just a couple of drips?:

And, what about the blackish investment. Could it be that the wax
had vaporized and entered the investment? When doing the initial
burnout at 300 degrees, for two hours is it possible the wax had
melted sooner and had vaporized?

I have taken a number of classes in casting, but the instructor
always did the burnout, and so I never had a chance to learn first
hand what goes on during burnout.

What’s happening is you don’t have a complete burnout. With many
flasks, as you’ve appeared to posit, it takes longer for the internal
flasks to reach total decarbonizing temps. The solution is to burn
out longer or hotter, or a little of both. Programmable is nice,
experience is much better as a teacher. I usually start burn at 200
degrees F. for a couple of hours to completely remove water from the
flask, then bring it up to 600 over another hour or so to loose as
much wax as possible, then run it up to twelve or thirteen hundred
for another hour or so and hold at that temp before bringing it back
down to eleven hundred and soak at that temp for at least 45 minutes
before casting there. This just works for me for most of the gold
work and silver work I do. I do a lot of Palladium white gold work
too so I will cast that around 1250 to 1300. Rough on my silicone
vacuum casting pads, but still cheaper than a bad casting I spent
hours on.

When using a wax tray you want to set the flasks facing sprue side
down so that the wax can flow out as it liquifies. Then as the ramp
temperature goes above 300 you can remove the tray and point the
flasks sprue side up so that the remaining wax burns out. The
investment should be bone white when done.

The sprue holes were all facing down, and as we had 8 flasks, a
couple had to be placed over the others, but we set them so that any
wax dripping from them would flow into the tray and not into the
flask below.

Hello Alma, The more flasks you have in the oven, the slower the burn
out cycle. Yours does not sound complete at the highest temperatures.
That is when the plaster gets white. I’m glad it worked out. Next
time, hold it at 1350 a bit longer. Don’t worry about the wax
residue, it all goes up insmoke anyway.

Thanks Tom. I will try your schedule the next time. We were using a
9 hour burnout plus some extra time as we had 8 flasks to cast, using
the Neycraft centrifuge. Obviously our schedule was not a good one

Thanks everyone for all the helpful replies about my casting woes. I
will try a much longer burnout the next time at the highest temp
(1350). We were just lucky this time that all the castings came out
perfectly. So much to learn, but what a joy when one understands the
whys and wherefores of what one is doing.

The more plastic the wax, the longer the burnout. Many of the
carving waxes are high in plastic and need to reachabout 350 degrees
F before they even reach a decent liquid flow point where they would
exit the sprue hole. Just my opinion, never actually measured in the
past 35 years. If I did, it was back in the seventies and I’m not
that memory young any longer. And the high end of the burnout needs
extra time too to remove all the residue. I can burnout eight flasks
with a normal injection waxes in 8 hours or less… but carving waxes
usually are more like 11 or twelve hours.

Thanks for the Johnny. We were casting 8 flasks, each of
which had 3 or 4 models in them all out of carving wax. That is a lot
of wax, and I can see where we needed a much longer burnout time.

I would suggest you don’t quite go to 1350F the investment starts to
break down at that temp. The exact breakdown temperature is
determined by several things including how much carbon is still
present. the more carbon the lower the break down point. When the
investment breaks down you get sulfur dioxide gas that causes gas
porosity issues in your castings. This type of porosity is often not
readily visible till you try to polish then it shows up as a hazy
area in the metal surface.

I am joining this discussion a little late.

I turn large pieces of pottery in Blue carving wax which are around
3.5 inches in diameter and up to 3 inches high. Some times I will
have one to three 4 inch flasks filled with turned bowl of Blue
Ferris carving wax in the oven. Each flask might contain up to around
50 grams of wax. I once cast a flask containing 65 grams of wax.

Carving wax melts out of the flask at a higher temperature than does
injection wax.

My over is 12X12X10. I do not cast until I have enough flasks to
completely fill the oven. The 2.5 inch flasks are usually stacked
two high.

I have a programmer to control the temperature. I vacuum cast.

I put the flasks into a ambient oven and heat it up to 250 degrees
and hold that temperature for 2 hours. I then increase the
temperature around 150 degrees per hour. My oven has a difficult time
heating up any faster. I will force it to increase up to 300 degrees
per hour when I can.

I start the BO cycle around 3:00 pm. The oven usually reached 1300
degrees around midnight.

I always maintain the flasks at 1300 degrees for at least 8 hours.
The flasks always come out bone white. If I have a large amount of
carving wax in the flasks I will burn out longer period of time.

Black smudge on the investment of the flasks is usually a sign of
incomplete burnout.

I vacuum cast sterling silver an melt the metal in a handy melt
electric furnace.

All sterling silver castings will develop fire scale because of the
temperature the metal experiences during the metal cool down cycle.

I have gotten around the problem of getting fire scale on my
castings by following the anti fire scale procedure I developed by
accident several years ago.

The process is simple. I generate a reducing atmosphere around the
cooling flask after it is removed from the vacuum table.

The process, which is describe in the following two Orchid papers,
is very simple. The process works so well I do not find it necessary
to spend the extra amount for anti oxidization silver.

I now cast sculpture in sterling silver without the fear of getting
fire scale on my projects.

If you vacuum cast sterling silver you might want to look up the two
papers. 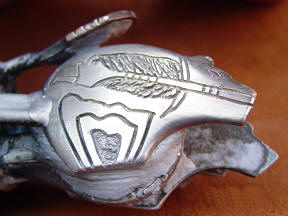 Having fire scale casting problems? No worries. Read this article for the new and improved Anti-fire Scale Casting Procedure.

Firescale has been the scourge of sterling silver casters since the first silver was poured into a mold. Read more in this article on how to prevent. it.

My guess is that the process would work for casting any copper base
material.