Bur problem. What am I doing wrong?

What I’m doing wrong here? I don’t use burs regularly, but I’m not new to using them either. This is the first time I’ve experienced this: 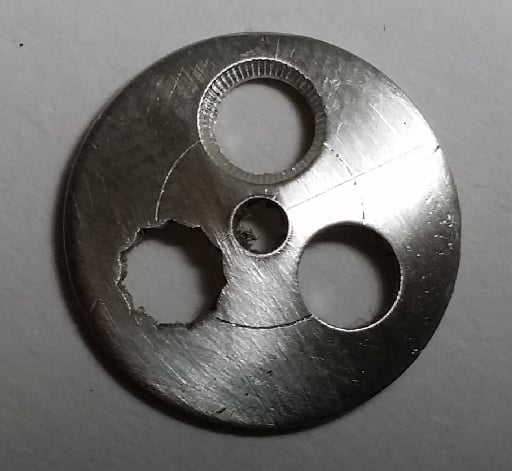 For scale, these will be seats for 5mm stones. I used a bud bur to enlarge the drilled holes, as in the one at 4 O’Clock. Then I used a very coarse-toothed ball bur which resulted in the hole at 8 O’Clock. Same thing happened at 12 O’Clock, which was smoothed out with a 90* bearing bur. All this using a flex-shaft.

These are all new burs. The only thing I did this time that I’ve never done before was to use cutting oil as a lubricant. I don’t know why that would cause this though.

Finally I switched to using a pin vise with the bearing bur, which smoothed everything out. But why did this happen? Too fast on the flex-shaft? Too slow? The cutting oil? Blame it all on the ball bur?

While I’m not sure what causes it, I’ve had similar problems sporadically over the years. I’ve discovered the best rememdy (at least in my case) is a much higher speed and a very light touch. Once it’s smoothed out, it seems to be fine to cut again, but that’s just my experience.

I find this also happens when the bur is new. What would I do? Just start
keeping your bur cutting lightly as you are having the bur touch the metal,
but keeping your bur well oiled. Don’t dig the bur into the metal at
first…go gently, letting the teeth cut but don’t (repeat) put any heavy
weight into this new bur! DON’T SPEED UP YOUR BUR as this might be the
problem too!

Hi Niel,
Most of what I make uses industrial engineering tools and machinery, so from that background and knowhow, (sadly lacking in many bench jewellers), i know what your problem is.
Your getting tool chatter, on account of too many teeth, or cutting edges on your burr. once it starts its difficult to reverse on account of the above…
Making a 5mm countersink needs a different tool, its an engineering countersink angle 90deg, with just a SINGLE cutting face. this can be like one side of a standard twist drill or the better one which has a hole 5mm diagonally through the 90deg cone end.
I too need to countersink at least 50 off just such a cut metal profile fast and efficiently and this tool works perfectly every time, just the lightest of touch in a mini drill press is all you need, even in a hand drill one you turn by hand not a dremel!
Go to an engineering tool supply house , they make then right down to 2mm in size.
The other c/sink that works well, tho its not designed for this job is a center drill. ask for that too.
Ted.
Dorset UK.

Ted’s mention of tool chatter got me to look that up. It certainly describes what I experienced. Chatter can be affected by inadequate tool rigidity, cutting speed, and spacing of cutting edges.

Perhaps I was holding the flex-shaft too loosely at the start and that got things rolling. I’ll try a firmer grip and perhaps a drill press to see if either helps with my application.

The article I read says there can be multiple speed ‘zones’ where chatter is minimized. There can be stable zones at low speed and at high speed where speeds in between can set up the chatter. I was running the flex-shaft on the slow side because I was concerned the large teeth on the ball bur would take too much off. I’ll try a higher speed with a more gentle touch.

The article also says that irregular edge spacing of teeth on the cutter can minimize the even, repetitive cutting that I experienced. So I’m also going to grind a few teeth of the ball bur down differently to see what that does.

Thanks for the help.

With a ball bur, would it prevent this problem by starting with the side of the bur, before turning it upright?

I was interested to read this discussion on burrs, because I have experienced exactly the same problem, in addition - I now get a ‘screaming’ noise when using burrs which I never got before. This happens with both old and new burrs. What am I doing wrong? The noise is quite deafening!
Theresa
Berkshire U.K.

Theresa
Can you be a bit more exacting as to where the noise/screaming originates from. Is it in the handle, the rotating bur or your flex-shaft? We all want to come in and help you. TTFN, eh!
I’m Gerry, On my iPhone!

The screaming noise could e coming from several parts of the tool your using.
how often have you oiled your handpiece?
they do need some tlc now and again like all machinery. sintered oilite bearings need oil occasionally.
my guess tho is as follows.
its a resonant frequency noise a function of the no of cutting edges on the burr and the rotational speed. It should vary in frequency depending how fast or slow your running the burr.
Advise.
Ted. Dorset UK.as well.

It seems to be where the burr is cutting into the silver!

I usually burr quite slowly, but tried it faster and it still did it.

Hi Betty, good idea, but you have to be very careful or the bur can catch and run across the surface of the piece. You can dig a pretty sizable hole where you don’t want one in a split second. This is true whenever using the side of a bur to do any sort of cutting on an any surface that doesn’t have something on the other side to keep it from wandering. Krause burs are especially prone to running away and digging a trough.

The ratcheting is caused by using the bur to cut the entire diameter of the seat at one time. Eliminate that, and you won’t get the ratcheting. Ted is right, it is a resonant noise caused by the bur bouncing around the hole, cutting deeply in one spot and bouncing around to the next notch and then repeating the process multiple times per revolution. That buzz you hear is caused by each flute bouncing from notch to notch multiple times per second

The ratcheting can be reduced by using a much lighter pressure when cutting and holding the tool and the work as solidly as possible so they aren’t able to move with relation to each other. It happens more frequently with finer burs as opposed to coarser high-speed burs. The more material being cut away the more the tendency to ratchet, i.e. the smaller the pilot hole the more the bur cutting the seat will have a tendency to ratchet. Once it gets started, it can be really hard to get a smooth seat again.

If you use a smaller bur and cut the sides of the seat a little at a time and work your way around the seat as opposed to cutting the entire diameter in one motion, you won’t get the ratcheting. You can also do the same thing to smooth it out once it happens. In ether case, you have to be careful you don’t over-bur the seat. That’s where a girdle stretcher would come in real handy.

Dave’s advice is good.
However as mentioned in the previous series on tool chatter posted on this problem, your all using the wrong tool . In the industrial engineering world I work in and come from weve specific tools to cut metal in a way so they dont chatter.
Read that post its self explanatory.
Ted.

On reflection I have a bit more information as to why I had such a problem with this ball bur.

A few weeks ago I made a similar setting and the cutting turned out well, but I didn’t use a ball bur at that time. The bur is part of the problem but maybe not all of it.

The disc I was working on is only about 16mm in diameter, thus very difficult to hold while cutting the holes. I had about 1/3rd of the disc clamped in a GRS Benchmate tipped over on one side. Between the neoprene padding in the jaws and the extended angle of the Benchmate, the disc was not as rigidly supported as it should have been, I think. The work needs to be as rigid as the tooling - it doesn’t matter which one is loose or subject to vibration.

Later today I’m going to scribe a number of layouts on a larger piece of sheet, do my seat cutting with the sheet solidly supported on my bench, and then saw out the finished settings. I’m also going to test the other steps I mentioned earlier to see what happens.

I’ll also try to find the bit Ted mentioned and see if I can get one to try.

Hi Niel, Ill try and take a pic of this tool, and post here.
As mentioned, what follows is why I need this tool,

That’s called chatter when they skip like that. It has to do with speeds
and feeds. How fast you have the tool moving and how hard you press. With
a drill press or lathe you can control that better. We do machining but by
hand so you need to slow down and maybe press lightly at first. Try
different things. Sometimes press hard and go slow sometimes fast speed
and a light touch. Those that have a pattern to them you might have to
dress up with a ball burr first then try again. 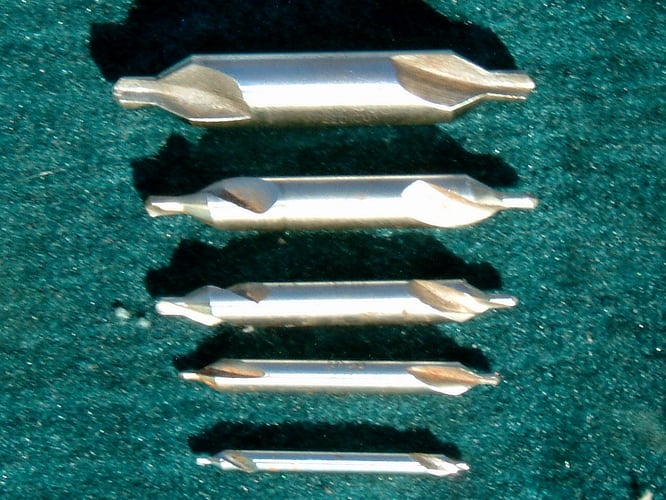 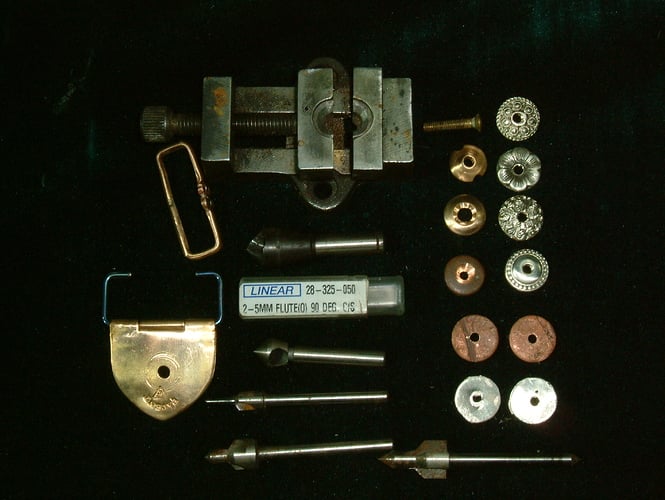 DSCF0264.JPG2832×2128 2.07 MB
Below the small vice is a larger c/sink
then the smaller one with the box and details thereon.
Below that are 3 samples of the aviation shanked c/sinks for sheet metal work .
Useable but not so good.
Re burrs, there an off shoot from the dentists tool kit, when turbine and diamond w/cooled drilling were developed the burr makers moved to selling more to the jewellery trade.
In the engineering world a burr is quite useless at precise cutting. as you have discovered.
the other pic is of center drills, also better than burrs.
On the rt are some samples of the small rounds I make.
The vice is self explanatory.
Ted
arkaysilversmiths February 12, 2018, 6:09pm #18

I’ve had a half-eternity ring in sterling silver have some parts exhibit chatter and some not, using the same bur, speed limited on the micro motor and well lubricated. It was almost like the grain of the metal in that particular region was ‘different’ than the others.