Noob here. Trying to melt a small amount of brass and need some help!

-6cm diameter clay crucible on a stack of ceramic tiles
-bernzomatic ts8000 and portable map tank.
-warmed the crucible for 30 seconds or a minute (not very long)
-Tried to melt 1/2 a tsp of brass granules for about 5 full minutes at max heat with the bernzomatic

The granules got red hot and then the color diminished. I’ve included a picture of my setup below.

Any help would be much appreciated. Again - total noob. 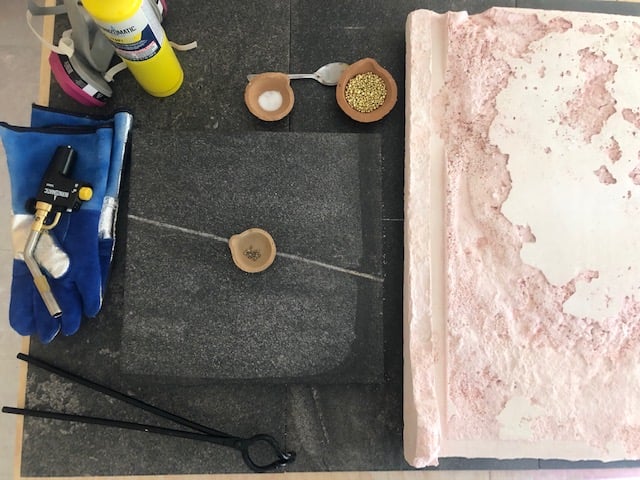 You don’t say what you will be doing with the melted brass. Whatever you intend to do, you need to have your mold (charcoal, closed steel, open steel, delft clay or whatever) ready to receive the melted metal. I have never used a berzomatic torch or MAP gas, but the lack of eneough heat sounds like your problem. You can build a small tent around you crucible to hold in what heat you have using some of the supplies you have on hand. I use small pieces of tile backer board. You can buy this at a big box store and cut it into whatever shape you want. You can also us fire brick. Keep in mind that all of these materials will absorb some heat. I can’t tell from you picture what your crucible is made out of. I have only ever used a white high temperature crucible that has been coated with borax. This is important for precious metal. I am not sure about brass. Again, I think that you need more heat. Think propane and O2 or acetylene. I use a Meco, Little Torch and EZ Torch. I know that the Meco and Little Torch will melt brass because I have done it. I am not sure about the EZ Torch, but will try later in the day. Good luck…Rob

Thanks so much for the reply, Rob.

Any tips on fume safety with the tent? I have a respirator and my space is well ventilated, essentially I’m working right next to an open garage door.

The pink concrete slab to the right has many holes from the aggregate (which is actually soap foam). I am planning on filling the holes with brass (for a sculpture I’m making). The concrete is fire retardant and completely cured and dry - so that’s the plan!

Sounds like a cool project. You should be careful the first time you pour. As dry as the concrete may seem, there may be enough moisture in it to cause problems when you pour (hissing, spitting, fracturing of the concrete). This is one reason why closed steel molds are heated before you pour. Have you thought about pouring resin into the voids. I say this only because I use resin sometimes as a substitute for lapidary and it is a lot of fun to work with.

Thanks Rob! I forgot to respond to one of your other questions - it’s a clay crucible.

I was actually planning on trying resin if I felt like the molten brass didn’t work aesthetically. Hear you regarding confidence that the concrete is moisture free - the slab is quite old and I live in a dry climate and this is a test so hopefully it’s informative in a promising way!

I was not able to melt a small piece of brass with my EZ Torch. The Meco and Little Torch work fine…Rob

Hello Danielle,
I have several comments on this. First, your problem could be that you are holding the torch too close to the metal. The hottest part of the flame will be just beyond the blue cone, and this will also be the reducing part of the flame, which will probably be better for melting this copper alloy.

Since the melting point of brass is about 1650 to 1720F and a propane/air flame is at least 1900F and MAPP gas is hotter than propane, your setup might work with propane. I see by Google that MAPP gas requires a “Turbotorch” head, so it could be that the mix of fuel and oxygen is just wrong with the propane head you have. If backing off to a different part of the flame does not work, you could try using a propane canister (about $5) and see if using this torch head with the fuel it is designed for works. Using some kind of cove around the crucible, as Rob describes, may help. You could also look for a MAPP gas head and use it with the MAPP canister you have. I see some heads on line for about $15.

I did see a video where someone melted brass to cast a half dollar sized piece about twice as thick as a half dollar…he used a propane torch with a little larger head than yours to melt in a crucible and it took 6 minutes, 30 seconds. So you may need to be persistent. I’m surprised Rob’s torch wouldn’t melt brass, but maybe it just takes a while. Certainly propane/oxy would do it, but getting a new torch and two regulators in addition to an oxygen canister is going to run into much more money and IDK whether you have other contemplated uses later that would make this a good purchase. -royjohn

royjohn…I suspect that, with time, the EZ Torch would have melted the brass. It does eventually melt silver. I just don’t have the patience to wait for it to happen when I have other options. I think that there is more to it than the melting point of a metal and the temperature at which a gas burns. Depending on the condition of the torch, how much actual heat the torch can produce at that temperture, the conditions surrounding the crucible and need to heat the immediate area, the metal may not actual get up to the melting point. You then have to keep the melt melted while you transition to pouring into a mold that you may also have had to heat up and I would rather have a propane and O2 torch. I know that there are gas and air torches with melting tips, but, with the exception of an old Prest-O-Lite I have never used one to melt silver or brass so I can’t comment on them, but they may be a way to avoid multiple regulators and a source of O2 (I use a medical O2 gnerator). In the end you need a gas that burns at a high enough temperature and enough heat to maintain that temperature long enough for the metal to melt. Thanks…Rob

I hope you’re not planning to pour molten brass into cracks in concrete. No matter how old or apparently dry it may seem, concrete contains chemically-bound water, which can be liberated suddenly when hot metal contacts it. The resulting steam explosion will send hot metal everywhere - you won’t want to be anywhere nearby. This is a known issue with foundry practice; concrete is to be avoided as a floor material if there’s any danger of metal spilling.

If you’re set on creating a metal-filled crack, I’d suggest using zinc or tin instead; it’s less likely to explode, and won’t have a problem melting with your propane/air torch.

Thanks Roy John. Really appreciate this insight. Given the dangers of pouring molten metal into concrete that @awerby mentioned - Im going to switch to zinc or tin. Better safe than sorry. Ill return to brass for another project down the line.

Thanks all for your thoughtful and detailed helpful. Glad I joined ganoksin!

I certainly was. I think switching to zinc or tin is the solution all around. Easier to melt with my setup and most importantly much safer.

Thank you for reaching out.

For melting brass and pouring into your gaps, I reckon you will need a hotter torch. Pewter or tin will be easier to melt. However, I’d suggest you use a resin and mix in brass filings, or sprinkle it on top when you have just poured it. File the surface down a bit to expose the brass.
Resins nowadays are less toxic than they were.
Cheers, Brian in New Zealand

Uhhh you may wish to reconsider Zinc…. Google “zinc fume fever” and then decide…

Zinc fume fever is bad, but it comes from burning it, not just melting it. If you’re trying to weld galvanized steel it’s a problem, but melting zinc for casting doesn’t produce much fuming. Of course, providing adequate ventilation is important whenever you’re heating metal.

Andrew, I agree, however heat it a bit too much and you have fumes, and yes ventilation is most important, but my point is that there are other metals that are more friendly for someone who is new to molten metal work to work with.

Re the potential problem of pouring brass into “dry” concrete: if you take a stone from the “dry” gravel you find somewhere outside and zap it with your torch, it may or may not explode. Stones may contain pockets of water even though they seem to be dry. So just wear the appropriate protective gear when pouring into concrete (goggles or, better, face shield, long sleeves, shop apron, extinguisher nearby). Safety is worth the trouble.