Hi, I need help with this bracelet, I made it in tube setting and
connected on the bottom but it won’t stay flat on the wrist, what
did I do wrong and how can I make it work, plan to make another one
with tube setting, any help would be appreciate. 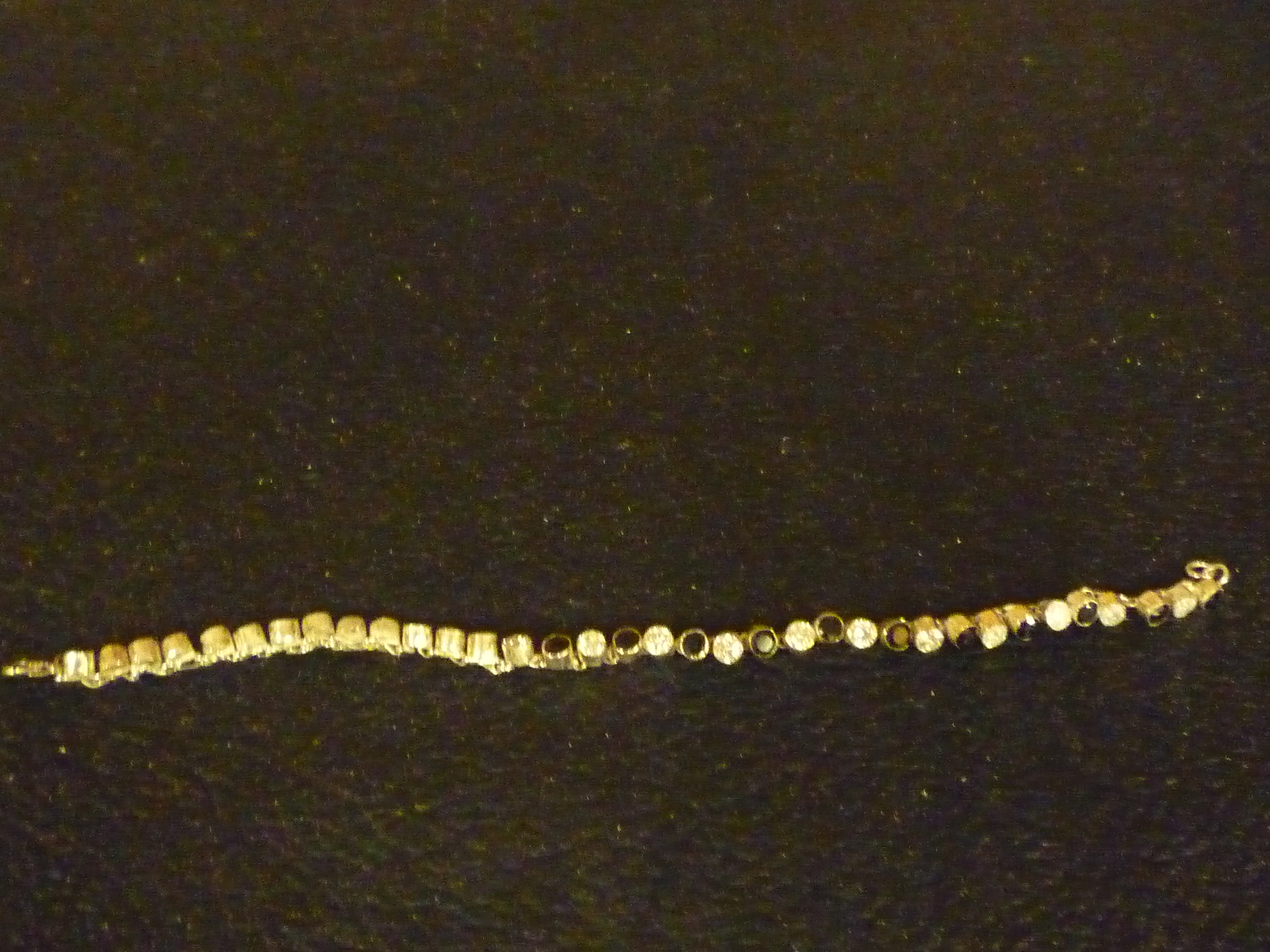 From what I can gather from the photo and what you say, the links
between settings are your problem. The bracelet doesn’t have a hope
of lying flat as it is. The bracelet is going to rock and flip due to
the links being on the bottom, and on the midline of the settings. I
Would possibly make it with four rings per setting instead of two.
The bracelet would then be far more stable.

Thank you for your help but I don’t understand what you mean by " I
would possibly make it with four rings per setting instead of two",
could you make it clear for me please?

You’ve constructed this as a kind of chain, rather than as a hinged
bracelet. Jump rings allow movement in 3 axes, you want to restrict
the movement to 1 axis. Also, that the rings project below the bottom
of the tubes will force them to tip over, as the tubes cannot rest
directly on the wrist.

I’ve uploaded a drawing of the type of hinge I’d use to construct the
bracelet I suspect you want. Keep in mind, it’s quite a lot more
labor than just soldering on jump rings, but it’s how a well made
bracelet would be constructed. Note that you’ll have to file relief
angles into the tubes below the axis of the hinge wire, to allow for
the hinges to move.

Also, if you do make a hinged bracelet it deserves a nicer catch
than the lobster clasp you used. A proper box clasp built into the
tubes would be best.

Just looking at the photo it looks like the links between the tubes
are allowing the settings to flop and twist. I think that perhaps a
hinge type link would stabelize the tube settings… No possibility
of twist.

If you look at each setting from above, if I remember rightly, you
can see one jump ring soldered to each side (ie two rings at 180
degrees to each other), underneath the settings. This will cause the
bracelet to tip. Could you possibly make it with two rings coming
from each side - not 90 degrees to each other, but a pair of rings
180 degrees to the other pair (ie four rings). I’m sorry. I’ve
probably made it more complicated! Elliot’s solution is far more
elegant - although I’m not sure I understand the drawing.

The link that Elliot provided as an example of an appropriate hinge
for the tube set bracelet is interesting, but about as clear as mud
for those of us who are not yet proficient in such work. A photo or
two of a similar hinge would be greatly appreciated and highly
educational. Humble regards,

Took me awhile to find the page I had tucked away in my memory.
Sylvia Wicks’ “Jewelry Making Manual” has three different methods of
making a bracelet with tube settings. One is a version of what Elliot
suggested. The photographs and instructions are really clear. There
are new and used copies online. It comments on design considerations
of loose linking, “such a system is not suitable for a single line of
units, as the slack linking would make them inclined to twist”.

I bought the book years ago, and i still look at it from time to
time. It has some nice overviews of mechanisms. Brain’s “Hinges and
Hinge-Based Catches” is another good reference for linking solutions.