The book begins with an excellent introduction written by Schmetzer
and Kiefert detailing the geological setting in the Tokovaya area of
the Ural Mountains. Schmetzer notes that in Russia, alexandrite has
always been found associated with emerald and gives a comprehensive
history of the various discoveries, specific mines and the history
of mining for emerald and alexandrite in the area surrounding the
Russian city of Ekaterinburg. The introduction includes a
breathtakingly beautiful full page image of Russian emerald and
alexandrite crystals from the Boyd Collection.

In the Fall of 1830, Maksim Stefanovich Kozhevnikov, a peasant
living in the Beloyarsk district discovered the first emeralds
clinging to the roots of a fallen tree on the banks of the Tokovaya
River. I was immediately struck by the similarity of the description
of this discovery of emerald in the Urals to that of the discovery
of tourmaline by Elijah Hamlin “on the last day of Autumn” in the
same year, at Mt. Mica, Maine. The tourmaline crystals were also
found clinging to the roots of a tree: “a vivid gleam of green
flashed from an object on the roots of a tree upturned by the wind.”
(Hamlin, The Tourmaline, 1873).

Schmetzer also reproduces an entry by mineralogist Sir David
Brewster in February 1935 edition of the London Philosophical
Magazine and Journal of Science. In the entry, Brewster notes that
the crystal is pink-red under candlelight that a thicker crystal
would be redder and redder. This entry, read a certain way, is a
misleading description and may be the actual source of largely
mythical “ruby red” alexandrite. Another other possible source, a
novel, The Alexandrite, written by Leskov and published in Russian
in 1884 that describes alexandrite as “green by day, red by night.”
This, of course, is partly due to the fact that in 1830,
incandescent illumination was limited to candlelight which at 1500
kelvin is a good deal redder than the light bulb at 3200k.

Chapter 4 surveys the location of important collections of
alexandrite specimens and includes photographs of some of the finest
examples. Chapter 5 contains an excellent, easy to understand and
beautifully illustrated using both drawings and photographs of
actual specimens, discussion of alexandrite crystal morphology.
Chapter 6 examines structural properties, again with excellent
illustrations consisting of photomicrographs of crystal slices that
show both growth patterns and pleochroism. Chapter 7 discusses the
very rare cats-eyes and star stones. Chapter 8 compares growth
patterns between Russian, synthetic and other natural sources of
alexandrite including a suggestion about crystal habit that could be
useful to gemologists and dealers in the field in doing preliminary
separations of Russian versus alexandrite from other locations using
magnification alone.Chapter 9 is the least satisfying though it does
have an interesting discussion of color and crystal orientation that
would be of interest to lapidaries.

Chapter 10 discusses origin determination. Branding is rampant in
the gem trade. High dollar premiums are regularly paid for sapphires
from Burma and Kashmir and tourmalines from Paraiba (Rio Grande do
Norte) Brazil. Russian alexandrite, due to its very limited supply,
enjoys a mythical and mostly undeserved status in the gem trade
(Wise, Secrets, p.85-89). Using Laser Ablation (LA-ICP-MS) a
particularly sensitive instrument that uses a laser to excise a tiny
bit of material and subject it to X-ray fluorescence spectrometry
(EDXRF) is able to compare tiny concentrations of trace elements.
Schmetzer compares alexandrite from several sources, Hematatita
Brazil, India and Lake Manyara, Tanzania and Russia. The study
concludes that relative concentrations of the elements; B, V, Ga,
Ge, Sn and Ta are relevant in differentiating point of origin in
alexandrite. The study was not exhaustive as it excludes material
from Ilakaka, Madagascar as well as some other minor localities. It
does, however, form a strong foundation to build upon.

The book also includes an appendix with a list of the principle
Russian mines and a useful historical timetable. There is an
extensive bibliography and index. Altogether a very satisfying volume
and a necessary addition to every gemological library. Unfortunately
like other German publications, the book is not available on Amazon
or any other online easily accessible source. The book may be
purchased by contacting the publisher; Schweizerbart Science
Publishers. for our English readers, the book also available through
the GemA bookshop 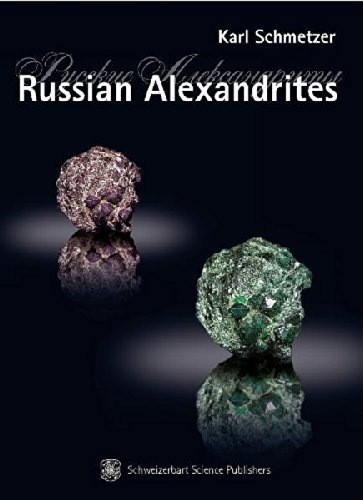