I have been trying to achieve a very pure matte black finish to
silver jewelry pieces. but have not been successful. I have tried
various oxidizers and the maximum I have been able to achieve is a
very dark grey.

Here below are examples of the color I am trying to achieve, I have
seen these pieces in person and they are indeed as black as they look
on the screen! They are all made from “oxidized silver” - however,
could this mean anodized? 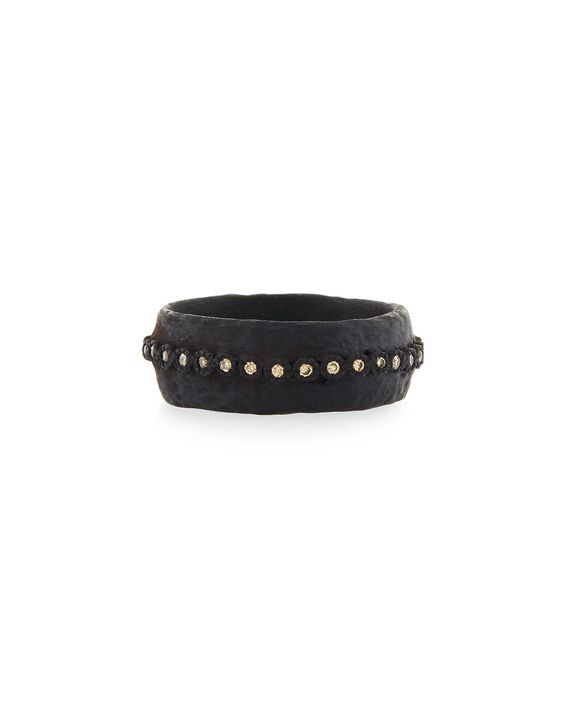 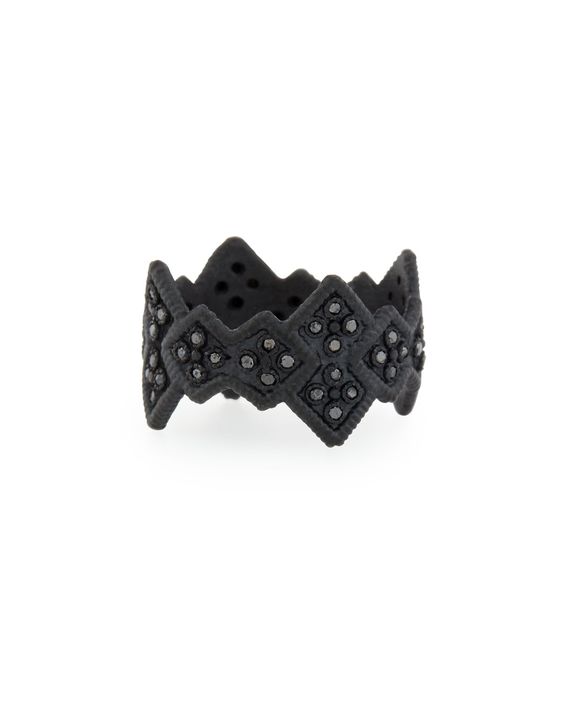 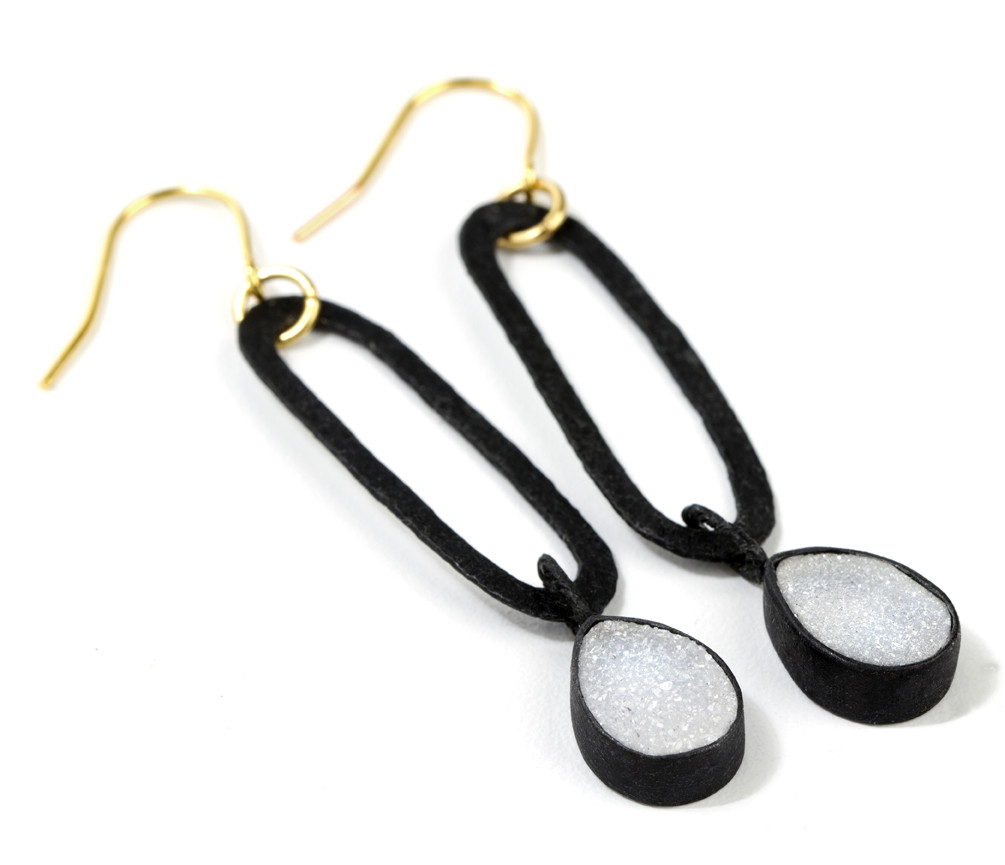 unfortunately i don’t know how to help you, but i’m interested too,
i know there are black liquids for electro plaiting but there are
quiete expensive.

Dani a few things you need to look out for and pay attention to in
oxdizingsilver. The best chemical I have found and still use is the
chunk liver ofSulphur. This chemical in its solid form (chunk) has
to be fresh. Most people fail at oxidation because they fail to
detect the unfresh liver of Sulphur. But it is also more complex an
issue where the chemical is highly sensitive, to humidity, light,
heat. So keep it in dark dry cool place sealed. When you get a piece
to mix with water you first run thechunk under hot water until its
color turns to bright orange or/and yellowinstead of grey. Need to
have everything super clean, the color will change with any
contamination, soap, or oil, or pickle etc. Temprature of the
chemical is important to be steady at just vaporing, not boiling nor
luke warm. Your metal has to also be clean. lastly now that there
are a few diffrent types of sterling, I find the non tarnishing or
deox silvers to come up much blacker then regular silver sterling. I
belive the regular sterlinggoes grey becuase of its copper content,
where as the others have siliconeor germanium and so on. One old
trick is to do light coats, while youburnish the piece inbetween
coats with a brass brush. good luckHratch

Try XL Gel for sure! Really black! You can get it from Rio, or
Google it.

Would you please describe the process you used to achieve the grey
you spoke of, and perhaps post images of the pieces. Also, what
patina chemicals have you used? This would help us
understand why you haven’t achieved the darker shade for which you
are aiming and would allow us to offer you the that
would guide you to your goal.

I get really nice deep blacks with Black Max from Rio. Second the
comments on liver of sulphur - it can keep for ages when stored
correctly, and give great blacks when used correctly. There are also
some other coloring options that Rio has now - similar to plating,
but different, that include colors and probably black too. can’t
remember the name right of the top of my head. so not sure if that
might be what was used.

My Mom had a friend who lived in Florida and she came to visit Mom
twice a year. I world have to polish all her bracelets because they
world have turned a universally solid dark charcoal color by the time
she visited. And since she had over a dozen of my father’s bracelets,
several of mine, and I assume some of Rob’s this was quite a task.
The constants were, our family made them, they were all Sterling,
Mom’s friend wore them and she lived in Florida.

Mom always assumed it was this woman’s body chemistry. But I am
thinking she lived in an area of heavily sulphured water. Perhaps it
was both, but If I could have been positive of the results she could
have had bracelets for 6 months just so I could develop a line of
silver jewelry with just that look.

I think I would look into the exposure with sulphur. Either wet or
atmospheric or both.

I just looked at one of the photos- are you certain it’s not metal
clay that the ring is made of ? Fine silver, particularly.999 metal
clay will take on a slightly (to grossly) different finish than a
copper containing alloy depending on the degree of polish on the
piece before any patina is added. Nonetheless, you can fume it in an
ordinary corrugated cardboard box using readily available flowers of
sulphur available at any drugstore or chemist’s (the real "challenge"
in fuming metal is to get the piece evenly patinated- Sometimes
metalsmiths will put more than one piece in the box and the piece
furthest from the plate of smoking sulfur or nearest any vent
hole/flap you may cut on the box can vary in resultant colurations
But its a messy stinky process- so do it outdoors !!! Keep in mind
there are easier, less time consuming solutions/processes out there:
There are a number of oxidisers/patina products on the market
including a line of Jax’s pre-mixed solutions that include a number
of dark greys and blackeners for silver and other non-ferrous
metals;Jax brand’s “Jax Black” is my second choice in a silver
oxidiser / liquid patina solution about equivalent in results to
flowers of sulfur.

A good habit to get into when using /making patinated metals is to
make a sample file of different processes and products on the metal
you most use with the product or range of products you are
experimenting with- just make small tiles to use with each different
product or method and attach it to some backing (paper, cardstock,
acetate etc.) that can hold good notes on timing, solution mixture
(i. e. -‘x’ parts solution to ‘x’ parts water) whether you are using
distilled water, tap water, well water, heavily mineralized water,
etc. (in the south for instance there are a number of places where
water has a most disagreeable odour and contains naturally high
concentrations of sulfur and/or calcium or iron) and any other
relevant to help you either re-create or avoid the same
results. I hope you get the result you desire. if you have any
questions feel free to contact me off the Orchid list! rer

Interesting about the silver bracelets. Way back when I went to
college a second time when my kids hit grade school, I had a friend i
took archeology classes with that had an interesting problem. He had
to get new eye glass frames yearly because the acids of his skin were
such that they ate through the bows of the frames. Taking heavy duty
O chem and P chem at the time at the U of AZ. I asked one of my prof.
They told me that some people do indeed have abnormally high acids on
their skin naturally. I told him to get the plastic type frames, but
he had other reasons why they would not work. So your mothers friend
rings that old bell in my feeble memory.

I also hate to admit that past the age of social security
eligibility, I finally admit I too need glasses. The picture another
poster had of the section of gold with the blackening, was so small
and being technically challenged (which means i can’t kick it to make
it work) I couldn’t enlarge the image. I have a 32" monitor as well.
But going back to some tricks I’ve seen in the past. One jeweler I
worked for would used model airplane paint that he rubbed into the
low lying areas. He periodically would repaint for his customers. I
do not suggest that, but I’ve seen it used and sold to the public.

Age finally heeding the siren call of a pile of half finished
jewelry from last summer.

Florida being a highly coastal state with high kevels of exposure of
oceanic air, it is absolute that it is the culprit of the oxidation
in that case. I had galleries in coastal states and areas that
carried my work the workalwaus came back highly oxidized in a month
or 2. My greatest test was having a show in cape cod. A trunk show
outdoors. I watched my work oxidizing right infront of my eyes, in 3
days, I cleaned and it oxidized, I walked over to, my neighboring
designer hers was doing the same, with a big difference, my work was
highly textured hers was highly polished, thetexture was enabling
the oxidizing salty air to work faster, while the polished work was
not so quick to blacken and easier to clean. The othe city my silver
jewelry oxidized fast was Manhatten.

Thermopolis, WY has a big hot spring that is developed for swimming.
The water is very sulfurous. It will turn silver black in a matter
of acouple of hours. I don’t know what else is in the water. It’s
volcanic country. The locals there are aware of the effects on
silver. Gene

In Santa Fe New Mexico polishing silver is sternly discouraged. If
you buy a piece of vintage or antique silver and clean it, it
decreases the value considerably. They wear it with the age of patina
proudly. My husband bought a piece for me, and was told if I cleaned
it and brought it back because it didn’t suit me the refund would
reflect the cleaning.

My foster daughter that I raised Is Navajo Indian. I also taught in
upward bound post college. Our students were off the Rez (what is
known as the Navajo and Hopi areas of the mass reservation of Az, and
some Pueblo from New Mexico. Out of curiosity because I had never
heard of this even when i worked in high end Indian Jewelry stores, I
called of few of the people I know. If you were told this in

Santa Fe (one of the stores I worked at was there) You bought a
story.

I’ve cleaned up many many pawn pieces. Mostly they leave the patina
so that the people who pawned it would know their piece, and those
buying pawn once it was no longer pawned, would know it was old and
pawn.

In fact once I called my foster daughter he real mother asked if I
could clean all of here jewelry when I’m out there this summer. It
hadn’t been cleaned in a few years, and one of her other real
daughters who use to do it, moved to South Dakota.

Final word, beware of some marketing stories told to tourists.