Having just returned from Tucson and Catalog in Motion, I wanted to
share some new about granulating with Argentium. Rio
Grande now carries Argentium granules. I had tried "homemade"
granules made from Argentium wire. Not very successful. The granules
did not want to hold their shape but would dissolve into the base.
So, I would just use Fine Silver granules instead. After talking
with the head engineer from Stern-Leach, I discovered that the reason
the granules I made did not work. The Argentium granules Rio sells
are made with a more pure formula (slightly higher fine silver
content is my guess) and created in an inert atmosphere. They were
FABULOUS! Cost wise they are less than the fine silver ones, but
still expensive- $300/oz. And at this time, you can only buy an ounce
at a time. Argentium ROCKS!!! 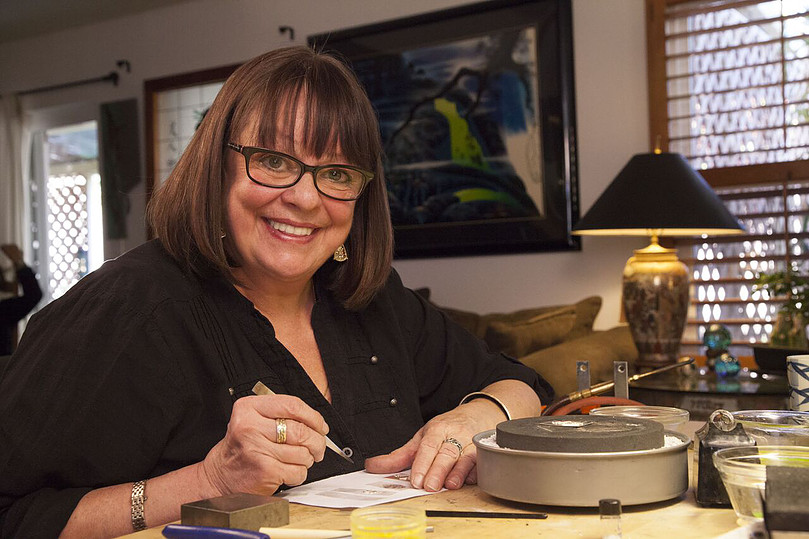 I am puzzled by your unsuccessful experience making AS silver
granules. None of the AS granules I have made collapse no matter what
home method I tried. I torch the AS silver wires on a solderite board
because the granules turn out bright and shiny. On a charcoal board
the granules come out a dull white so I prefer not to use charcoal.
Searching for some explanation for your experience, I thought maybe
the charcoal-fired granules could collapse, but when I tried them
this morning, they too did not collapse.

I have used the Stern-Leach created granules along with my
"homemade" ones. Both work equally well and neither collapse.

Perhaps you could elaborate on your method. Standard sterling silver
granules will collapse as you describe, so I wonder if the silver
wire you used actually is Argentium silver. Hope to hear more from
you,

I also was surprised that Ronda said she’d had lack of success with
Argentium granules she made herself, since I have had no problem
fusing sheet, wire, or granules that I made.