The jewelry artist of today is not constrained by the conventions of commercial fashion but rather thinks from a place without restraints on creativity. All of the traditional jewelry making techniques may be employed but they are in the service of “out of the box” forms, images and materials. Precious stones may appear alongside a rusty key, scale may be bolder, design may take on more of a sculptural stance as form interacts with body. As the aesthetic moves away from mainstream conventions, images may not be as “pretty” but rather used to make a personal statement. The jeweler’s stage is broadened to include many diverse visions and the possibilities are endless.

Many contemporary jewelers are incorporating found materials in their work. These objects speak to past experiences as well as an aesthetic sense of color, form, texture and design. As inveterate collectors and scavengers, jewelers revel in manipulating objects, presenting them in new contexts, giving new meaning to what may have previously been overlooked. The castaway is elevated to a place of honor, the mundane becomes precious and materials rusted, worn by age and discarded, are valued for their intrinsic beauty.

The found object jeweler, always on the hunt, haunts thrift shops, antique stores, garbage dumps, and curbsides. Machine parts, plastics, metal, manufactured remnants present themselves in our everyday environment just as bones, plant material and shells inhabited the prehistoric jeweler’s landscape. Found object jewelers continue in a long tradition of the collage and assemblage artists throughout history who have exploited the found object.

Jewelry of this genre is an antidote to the wasteful, consumer oriented direction of modern life. It is a celebration of the inventive use of objects transformed. It challenges the viewer to take a fresh look at the ubiquitous mundane objects that can be appreciated if we only take the time to direct our attention in their direction.

“One day, in a rubbish heap, I found an old bicycle seat, lying beside a rusted handlebar and my mind instantly linked them together. I assembled these two objects, which everyone recognized as a bull’s head. The metamorphosis was accomplished, and I wish another metamorphosis would occur in the reverse sense. If my bull’s head were thrown in a junk heap, perhaps one day some boy would say: ‘Here’s something that would make a good handlebar for my bicycle!’” Picasso 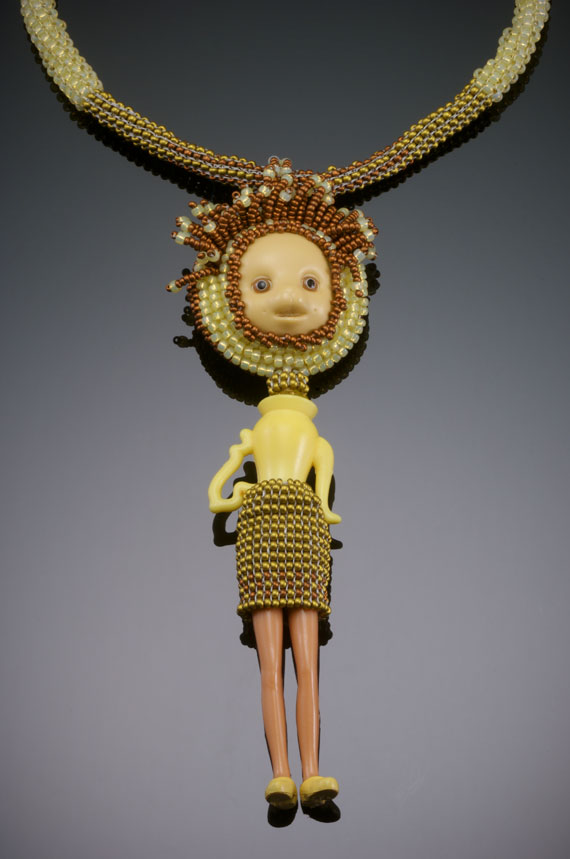 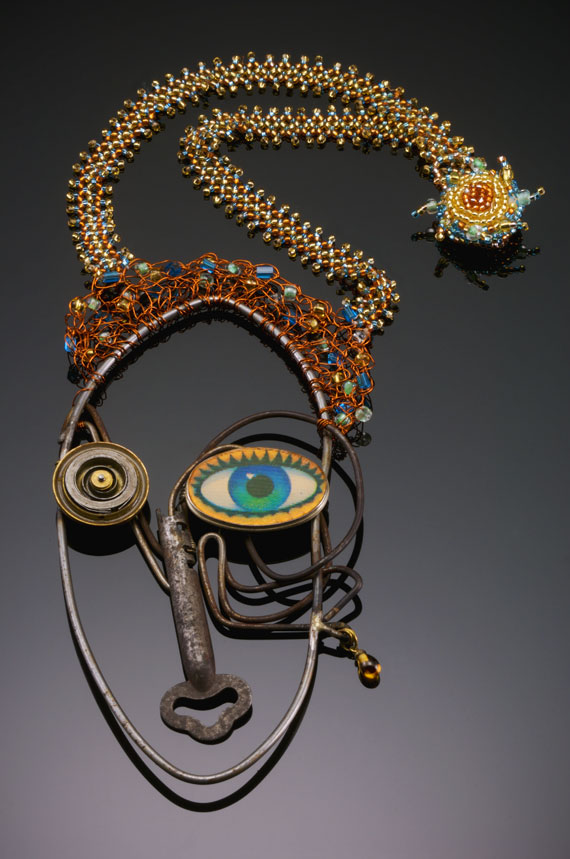 “Guinness - It’s Good for You,” photo by artist

“If You Can Read This, You’re Too Close,”

“If You Can Read This, You’re Too Close,” photo by artist