Hi all, Just a few days ago I posted that I was going to hear Zahi
Hawass at the Met. Museum, but now I’ve realized that I can’t make
it. So, if anyone in the NYC area is interested in checking him out

Here’s a clip from Amazon.com

about his latest book “Secrets From The Sand

In his newest book, Egypt’s leading archaeologist takes readers on a
personal tour of the fascinating sites he has excavated over the
last 33 years. His stirring descriptions of his life’s work,
accompanied by many previously unpublished photographs, take us from
the famous monuments at Giza, where he has supervised the
restoration of the Sphinx and the Great Pyramid and excavated the
cemetery of the pyramid builders, to the Valley of the Golden
Mummies in Bahariya Oasis, perhaps the most significant and
spectacular discovery in recent years. Zahi Hawass, recently named
to the top antiquities job in Egypt, spins true tales of tomb
robbers, explains how he negotiates with local Egyptians whose homes
may lie directly above important sites, and describes in detail the
exhilarating experience of entering an ancient tomb for the first
time after thousands of years. Dr. Hawass is a spellbinding
storyteller; in his hands archaeology becomes the stuff of
enthralling adventure, danger, and wonder. 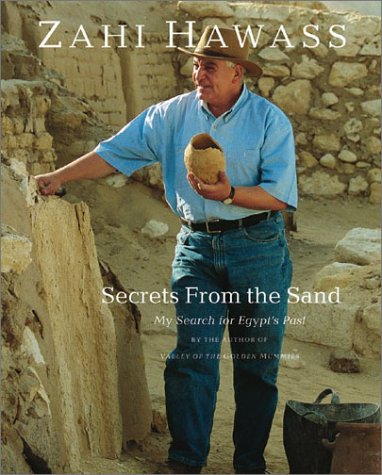 Secrets From The Sand: My Search For Egypt's Past

the Valley of the Golden Mummies in Bahariya Oasis, perhaps the
most significant and spectacular discovery in recent years.

A couple of months ago, I had the pleasure of attending a FREE
lecture by two members of the research team working on the mummies of
Bahariya. The two lecturers were faculty members of the University
of Hawaii. One was an epidemiologist and former classmate and good
friend of Zahi Hawass. He was invited by his old buddy to study the
mummies of Bahariya. The other fellow, sorry but I can’t recall
their names, was in art and archaeology. W hen he found out about the
project, he ran across campus to the med school and latched on to the
project through his colleague.

The MD/epidimiologist was really excited about the find because he
had thousands of subjects of all ages and socioeconomic groups to
study. He has started studying the mummies with a portable cat scan.
Besides checking out cause of death, vital statistics (age, sex,
height, etc), they were able to do scans to check for trace elements
in bone, hair, etc. They could get some idea of the living, working,
dietary conditions of the time. They could look at family groupings
to search for congenital diseases. Unfortunately, they are not
allowed to do DNA studies on these mummies or the Royal Mummies at
this time.

The archaeologist was also thrilled with the sheer wealth of subject
matter. So much of the site is unpillaged by grave robbers because
the site is in the middle of no where. They jokingly said a donkey
found the site when a sink hole opened up under the animal. It
sounded as if it will take several life times to sort through
everything.

I wish I could attend Dr. Hawass’ lecture.