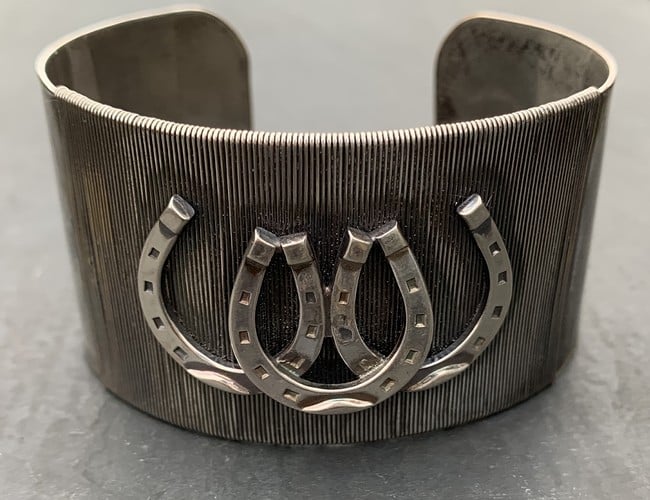 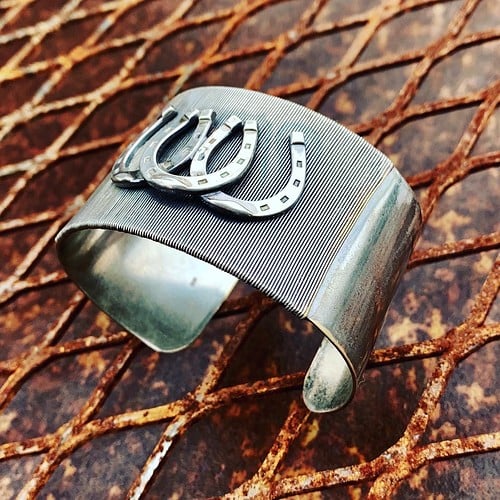 Hi All, I’m looking for advice on how to recreate the above cuff. Often I work with vintage components which was the case with the above cuff. The original cuff was sterling silver and stamped Taxco and 925. It was 16 Guage metal with silver wire of apx 22 guage. To make the piece above i simply soldered on a vintage brooch. The texture and patina that resulted was fabulous and I now want to make this cuff from scratch. My question regards wrapping of the wire. Should I fully form the cuff first and then wrap. How can I maintain proper tension when wrapping to get the neat appearance of the vintage piece. Your input would be much appreciated! All the best, Sally

Fully form and then rough polish the bracelet. Clean it and then coat with an alcohol and borax solution and burn off the alcohol. You should be able to do the wrap and apply the horseshoes after the bracelet is formed. If you wrap first, it may distort when you form the bracelet. Likewise with the horseshoes. Form them separately from the bracelet, prepolish them, coat with alcohol and borax and then solder them together with hard solder. Prepolish again and carefully form them to fit the cuff and solder them to the bracelet. Be careful that you don’t use to much solder that it flows into the wrap and becomes visible. This is a hard piece to make…Rob

Our Dad, (Rob’s and mine) had a few pieces he brought back from Arizona with similar applications. Flat cuffs but not that wide. I asked how the wraps were soldered on and as I remember he was convinced the wraps were applied and fused in a kiln. The pieces are long gone and at that time I didn’t know enough to question further. I have tried similar applications on my own with a torch and not surprisingly I pretty much followed Rob’s description.

I wonder if it would matter if the wrap was fine silver wrapped over sterling and treated as Rob describes. I ask this because after 30 years at the bench I used some fine silver for the first time just this week. Making a bezel for a circular cab. About the eighth stone I will have ever set. Always something new to learn.

You might try paste solder to secure the wrap…Rob

Thank you both for your feedback. I really appreciate it. With the original cuff the wire that formed both the starting point and ending point of the wrap was tucked under a couple of wraps and held in place with just a small amount of solder. One of the things I’m struggling with the most on this piece is the actual wrapping of the wire. I have ordered 22 guage SS dead soft round wire from Rio. It will come on a spool. If I have calculated correctly it will take six wraps for every 1/4" of coverage, for a total of 50 wraps =/- for the entire piece. My thinking is that the tension that I place on the wire while wrapping has to be super consistent. Too loose and there will be play, too tight and I risk breaking the wire. I plan to put lots of effort into smoothing and rounding the edges of the cuff so in hopes of preventing the wire from breaking. Beyond that though, I’m worried about how to maintain that perfect tension as I wrap this piece. Perhaps some sort of mechanism on my bench to mount the spool of wire on so that I can control how quickly it feeds? Again, any feedback is welcome! Thanks so much, sally

Some thoughts. Too much heat on what appears to be a tightly wrapped piece may cause it to expand and no longer be tightly wrapped. I don’t know any way around this possibility and I would experiment to see how it goes before you use all of your wire. You might consider wrapping with half round wire. There would be more surface contact for the solder to grab on to. If you can find some help, have your helper feed the wire that you are wrapping with through a piece of cloth, inner tube rubber or some material that will generate enough resistance to moving through their hand that this resistance helps you to maintain tension while you turn the bracelet to wrap it. If you can’t find help, pass the wire through an old book that you hold closed between your knees. Note: this is how tension is maintained on thread if you are tying a new line guide on to a fly rod. Yes, I am full of generally useless information. This is a very difficult project and one that I would, myself, not be likely to take on. I wish you luck…Rob

These are great ideas Rob! My husband is now enlisted to help with the wire feed. I also think I’ll do a small test piece first to see how this works before starting the big cuff. I do have a small kiln that I use for PMC on occasion that could be used to test the fusing of the wire. As intimidating as this project is, I love a challenge and hope that I learn some new things along the way. Thanks so much for the generous advice from both you and your brother! Sally

I don’t know if it will make any difference but: Were I doing this project I would make certain the wrap wire is well and evenly annealed. That wrapping wire right out of the box may want to expand along its length. And it may not remain as tight a wrap as you would like. Annealed wire may stay tight enough and not expand due to the heat. Also, I must say that I suspect this is a possibility more than I know it is a likely hood. Perhaps testing this theory as a part of your experiment would be possible. Then you could spread the word of success or failure.

I would use half round wire if I were trying this and it was available.

Don, will check on the availability of half round at this guage. It makes a lot of sense to use this. Question re annealing? When wire is dead soft (verses half hard), I have always assumed that it would already be in an annealed state. The half hard representing work-hardened wire verses dead soft, already being annealed. I may need to go back to school on this assumption? Sounds like I am not understanding the nature of annealed metal like I should…S

I suggest not bothering with half round. It is a PITA to keep straight. Unless you can keep the flat side perfectly parallel to the surface of the cuff, you’ll see edges. Round wire is round no matter how it might spin while wrapping.
Since you’re ordering dead soft wire I think you’ll find it’s much easier to make this wrap than you feared. Dead soft silver doesn’t spring back when bent. Do a little test first. It should be as easy as wrapping with a thick sewing thread. Easier really, as the wire will stay put, even if you slack off the tension.
With a little practice just hand tension should be enough to keep the wraps straight and tight. Wear work gloves so you don’t get blisters.
Do not use pliers or any kind of steel tool with the wire. The biggest problem with round wire is that it marks very easily, and once marked you can never get it to be perfectly round again short of drawing it down.
The most challenging part is finishing it off. If you want to draw the end under a couple of wraps, as you finish off a whipping, you’ll have to figure a way to get the free end under without stretching or otherwise distorting the last few wraps. That’ll take a couple of tests to find a good method.

Hi, Sally. This is an intriguing project. In the case of annealing dead soft wire - when the softness really matters, I go ahead and anneal anyway. I have found hit offers even greater malleability. I also agree with a previous post that recommends using round wire instead of half-round.
Best!
Nancy Lee

After a little time experimenting with wires I will concur. Half round is too twitchy for me too. Don

Paula makes a good point.
In fact there is a similar technique used in fiber when ‘whipping” the end of a rope or such to prevent fraying.

I might suggest using a doubled section of a finer gauge of wire than the wrap, laying it on the backside as described previously with the resulting loop extending beyond where the wrap will end and allowing a generous length for the two loose ends that will be situated at the beginning of the wrap.
When you reach the end of the wrapped section, you can “thread” the end of the wrapping wire through the “eye” of the folded/doubled wire and wrap the loose ends of the doubled wire around a mandrel or other strong smooth rod and pull it out from beneath the wrapped wires.
The end of your wrapping wire will follow and be tucked beneath the wrapped wire. Wiping a bit of wax lube on the last wire section might make the process smoother.
I’d suggest trying this technique a couple of times on a pencil or dowel using a strong thread in order to see how it’s done and to work out how close to cut your wrapping wire at the finish so that it is tucked in sufficiently. It will be a bit trickier with wire. You might do a trial with copper wire as well.
Verbally it is a bit difficult to convey - you can see the process on YouTube.com: search for “common whipping” which returns an easily followed video from the Paracord Guild.
Two modifications needed for your project:
-The looped wire is separate from the wrapping wire. (so the beginning end of the wrapping wire should be secured under several turns)
-Instead of drawing the wrapping wire only half way under the wrapped section and cutting the “tail” off, the finer, looped wire will be pulled out completely, leaving the end of the wrapping wire behind.
Good luck with this interesting project!

How is this project progressing? And can you send a photo of the inside of the bracelet as well?

Hi Don,
Alas, I haven’t been able to actually start the piece because I’ve been backed up on commissions, followed by an out of town business trip. Hope to get rolling at the end of the month. I looked through my photos and don’t have anything on the inside of the piece. What I remember is a small piece of wire soldered in place just beneath the inner edge as the beginning of the wrap. Each wrap then covered this little piece until the end where again a small amount of wire was tucked and soldered in place. I have plenty of extra wire and silver sheet to do a small test piece before taking on the bigger cuff. Will share my progress with the group as soon as I get started.
Thanks so much for following up with me!
Sally

Is it wrapped all the way around in one continuous strand or are there many pieces laid side by side.

One very very long continuous wrap from beginning to end!