I’m looking for some guidance or resources for weaving suede, thread
or fabric so it can be a solid foundation for bracelets and
necklaces with heavy silver elements. I ordered Helen Banes’ “Fiber
& Bead Jewelry” but it does not have what I need, which I think is
pretty simple. Here is a link to a picture of the look I am aiming
for: 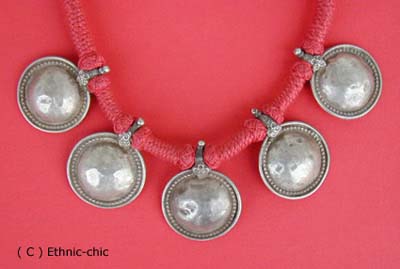 My pieces are based on tribal body adornments, so I like the sturdy,
organic look of the fiber in this piece. But I am open to all sorts
of weaving/braiding ideas. Any help would be great!

It looks to me like simple winding or half hitches using a heavy
leather or rope foundation. You might find something in a book on
macrame.

you need to search belt weaving bracelets are just a scaled down
version.

That looks like a braiding technique to me (hard to tell because the
background is nearly the same color as the cording).

Try any book on braiding, or look up Kumihomo. Again, I can’t tell
what the technique is from that picture, other than its a braid and
not a weave.

I don’t know what kind of technique was used to make the necklace
you posted, but it’s probably a stuffed tube of some sort. It could
have been woven on e.g. a backstrap loom and sewn, with a seam that
doesn’t show in the photo. Or it could be some kind of braid, etc.,
worked in the round. It doesn’t look crocheted–that I would
probably recognize–but Tunisian crochet might give you the look
you’re after. Most basic crochet books have instructions for this.

You might want to look at Beads, by Janet Coles and Robert Budwig I
don’t have it available, but I remember that it does describe how
to make certain styles of ethnic necklaces.

Also, I know there must be many books that deal specifically with
braiding, twining, finger weaving, etc., , but the only book I can
think of right now is Arline Fisch’s Textile Techniques in Metal

Her instructions are for wire braids, etc, but, since they
originated as textile techniques, the instructions should work with
cotton thread, of which the neckpiece you posted seems to be
constituted.

Do we have members from North India who can identify the technique?

PS: I do remember, quite a while back, some very cool Tibetan fiber
technique being described in Bead and Button magazine–I see on
their site that it was for a closure and was in the June 2001
issue. You might want to check that out, too.

Although I’ve done little to promote this last book of mine, Fiber
Wire Beads and Jewelry, you may find the use of “wibers”, strands of
very thin gauge wire and fiber twisted together, of interest in your
projects. There are 30 jewelry designs aside from the beads that
also integrate metal and fiber in some new structural ways.