Just the other day, I made a little tool for sorting casting shot by
size. I like to add granulation to some of my silver pieces, and I
am too lazy to make my own. Picking through a bag of grain is
painstaking, so I turned a cigar box into a sorter. It has about an
85% accuracy rate, and dramatically cuts the labor (and eyestrain!).

This isn’t fancy, but it does work pretty good: 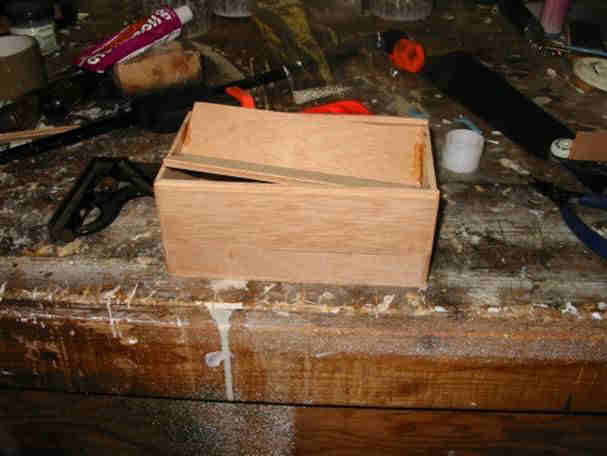 Just take a cigar box like this. It has a sliding lid and is fairly
deep (any cigar shop can provide these). Cut the bottom 1" off of
the box. This will become the sorting tray.

Trim the long end of the sliding lid panel so that it is roughly the
same length as the long opening of the box, then cut it in half.
Keep this cut as smooth as possible. Afterwards, sand the cut sides
of the lid pieces flat by placing some sandpaper on a flat surface
and sanding the cut.

Now glue/epoxy the lid pieces into the upper opening of the box you
just cut the bottom off of. This is going to be tricky, because it
involves some compound angles. This is why I use quick setting glue.
Don’t get your mitre saw out and try to make a piece of art unless
you are really certain you can work out the geometry. Gaps can be
filled with glue.

I have about a 1/2" difference between the height of the ends of the
pieces, creating a sloping effect down the long width of the box.
The pieces are tilted towards each other at about a 30=B0 angle.
However, the critical element of this ramp is not how well the two
pieces are joined together, but rather how you keep them apart.

The upper end of the ramp should have gap wide enough only for the
smallest piece of casting shot, perhaps 1/16". The lower end spreads
out to 3/16", which is about as big as a casting shot ‘clinker’
gets. So, as the ramp descends, the space between the two box lid
pieces gradually increases. 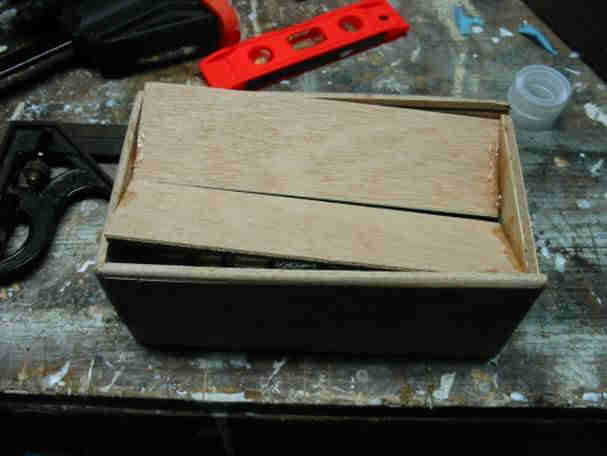 Once the lid pieces set, you can cut out strips of cardboard and
glue them into the box bottom, about 1" apart, which will form a
series of compartments for the shot to drop into. The strips just
keep the shot beads from rolling around and foiling your
organizational efforts.

Let everything dry. Go have a cigar recently liberated from the box!

Once all is set, put the top back on the bottom of the box, and go
get some sterling silver casting shot. With a teaspoon, gently place
some shot into the higher end of the ramp. The shot will roll down,
then drop through when the groove becomes too wide. Obviously, the
smaller the shot bead, the more quickly it will drop, landing in one
of the compartments in the bottom of the box. Eventually, each
compartment will fill with shot roughly the same size. 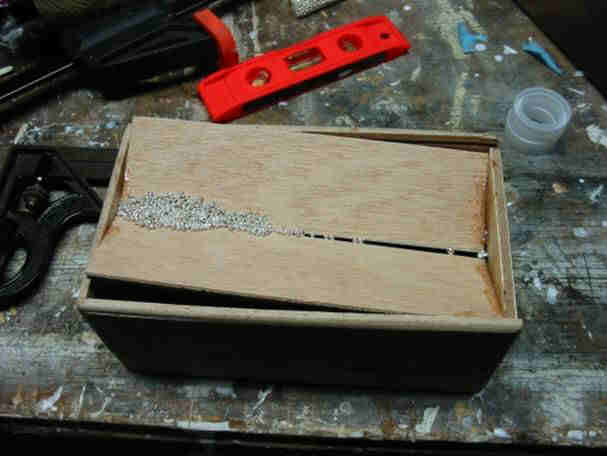 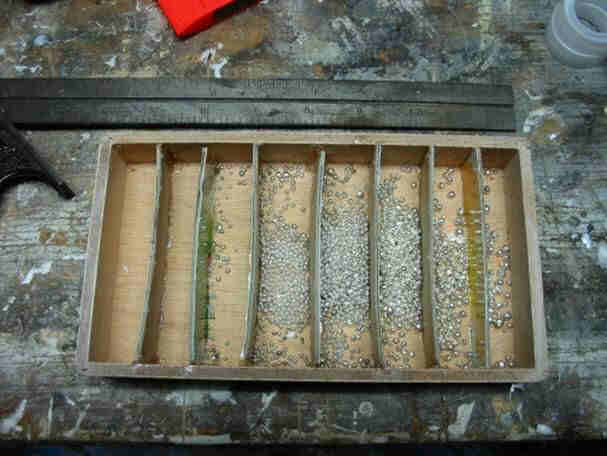 Now, this box does not have a brain, it is working on the principles
of physics. So, it can’t filter out odd shapes from perfectly rounds,
and so some flat pieces will fall through in the narrower area when
they 'should’have passed all the way to the end. As you place shot
into the groove, it helps to have a pencil or stick ready to
‘motivate’ the shot beads to move. Just don’t push straight down, but
rather just a little brushing motion. Pushing down will jam the beads
into the groove and damage the groove. Rough edges in the groove are
your enemy.

Some shot will, at first, bounce off of the bottom of the box and
leap into other compartments until a layer of shot is formed to
catch falling beads. Other beads may race down the ramp and
overshoot their intended compartment. To prevent this, place the
shot gently into the groove, a little bit at a time.

It ain’t pretty, and it ain’t perfect, but it gets the job done. I
take the box bottom to my workbench and pick the pieces out that I
need. If I needed a whole bunch of the same size, I can pick them
out and put them in a baby food jar.

As Mr. Portokalos says, ‘There you go!’

My thanks to all the fine folks who make your website such a great
resource for amateurs like me!

Your ‘Sorter’ sounds great. Isn’t it amazing how we can come up with
a handy gadget if we just analyze the requirements & look at the
materials at hand.

For those that don’t have cigar boxes, another solution is a set of
diamond sieves. They’ll cost more than the cigar box sorter, but
they’ll do the job & can provide a number of different sizes if
desired.

Hi Folks, I have used the type of plastic/tupperware found at the
local dollar store. You can buy them in multiples of three or four.
If you replace the bottoms of the plastic containers with different
sized mesh or screening it is very easy to sort out. I used simple
hot glue to attach the screen to the bottom of the containers.Start
at the top and shake them through the various levels !! All is white
in Ct. and feels like winter!!!