Some folks like to see other folks flounder. If any of you are out
there you are going to enjoy today’s tale. I need to tell you this as
part of my story. French is my mother tongue and I speak it almost as
well as I speak English. That said. I walked into an Italian store
and asked the owner–in English-- if he had any interesting books on
Italian jewelry. He stared at me. I stared back and then asked if he
spoke French. He grinned. I asked the same question. he said “uno
minuto” and left and returned with a book. It was all in Italian. But
I speak French I thought. And they’re both Latin languages. I should
have no problem.

Hah! Masterpiece of English understatement. It is here that I want to
let you all know that I have now elevated stupid thinking to an art
form. That said. I struggled with this article --written entirely in
Italian–which is now forthcoming. I may be a hair off. but I think I
have the essence of it. So. Nodo Erculo either means Herculean Knot.
or Square Knot. Perhaps a bit of both. You will look. you will judge.
And if any of you speak Italian. I have no doubt you will let me know
which it is. or if it even is what I think it is.

The motif of this knot seems to have come into usage with the 4th
century jewelers in Taranta, Italy. It is part of a golden tiara. The
knot and the imagery connected to it is said to have magical
properties which keep away pain and misfortune. Its filigree design
presumably emulates roses and palms and is constructed with an intent
toward extreme delicacy. In addition to the magical properties used to
ward off evil. the pattern is also supposed to depict a degree of
humor. Though I must say. when I look at it I get nary a chuckle. or
even a smile. or even the slightest rib tickling sensation.

I suspect this is in part due to the fact that I am thoroughly
Americanized and I tend to find hysterical humor when watching people
ice-skating and floundering. arms flailing. then falling flat on
their collective asses rather than looking at an antique bit of
jewelry. But that’s me.

And as far as interesting goes. the jewelry holds higher ground. So.
you want to see? You know where. Home

That is beautiful. How old is it?

Nodo Erculeo is usually translated as Herakles Knot in English, as
it is far more common in Greek than in Roman decoration. It is also a
square knot to Boy Scouts and a reef knot to sailors.

The Greeks called it a Herakles Knot because it was considered such
a strong knot. Of course, as sailors know, it is not an especially
strong knot and can easily be collapsed into a lark’s head on a line.

The motif goes back well into antiquity. I suspect the reference to
4th cent. Taranto is actually to 4th cent. BC Taranto. Taranto was
founded by Spartan emigrants in 706 BC and called Taras. It was one
of the leading cities of Magna Graecia. One legend has it that the
city was founded by Herakles. Equally likely, to my mind, is that the
ornament first became prominent in the nearby city of Herakleia, just
across the Gulf of Taranto, founded in the 5th cent. BC.

Wherever the Herakles Knot was first used as an ornamental motif it
is often found as a feature on Classical and Helenistic jewelry. Here
is a gold armband in the Metropolitan Museum with the knot inlaid
with garnet. Note the florettes and palm frond similar in style and
placement to that in the Tidbits knot. 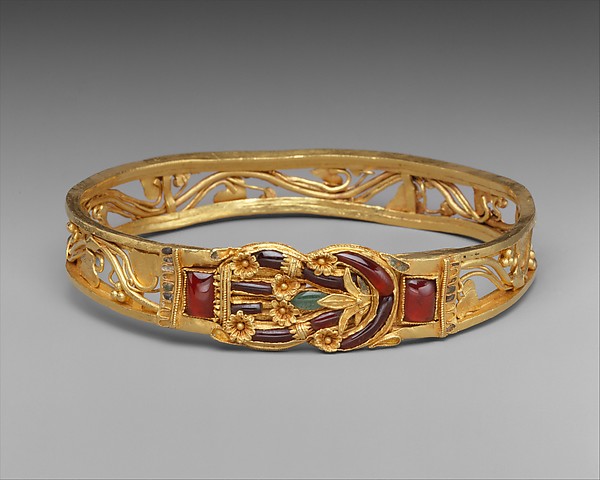 The Herakles knot on this sumptuous armband is enriched with floral decoration and inlaid with garnets, emeralds, and enamel. According to the Roman writer Pliny, the decorative device of the Herakles knot could cure wounds, and its popularity in...

I think the humor alluded to in your Italian article may be in the
juxtaposition, one might even say incongruity, of delicate
scrollwork and floral motifs on a knot symbolic of the power of
Herakles.