I know that many of you will know who this is before I get anywhere
near the end. Let me define the parameters of those who will know.
The other day I got up from my desk to get something. As I began
walking around it I suddenly stopped and realized I had forgotten why
I had gotten up in the first place. To those of you for whom this is
a familiar scenario… you will know who I’m talking about immediately
for you have reached “The Age”.

That said… I will bestow upon you a give-away hint. Ready? Here are
the last two lines.

“But, bananas like the climate of the very, very tropical equator, So
you should never put bananas… in the refrigerator!”

Anybody? Anybody? By a show of hands… who is ready to admit they
have reached The Age?

Last time I did this I featured a brooch of Vincent Price as Baka
created by Eugene Joseph. However… Vincent Price was an easy
choice. He had strong star power and immense appeal. However… the
painted, glazed pottery brooch of this actress/songstress had less
draw power–though I don’t know why–because jewelry companies such as
Elzac never made any other celebrity pins except for the knock-off
you are all about to see. If you remember to look.

So… a bit about the character in the brooch.

She was known as the Brazilian Bombshell. She was Portuguese. She was
over-the -top. She was considered by some to be caricaturish. He sex
appeal was so in-your-face that it was difficult for some to believe
she was probably the highest paid entertainer in Hollywood in 1946.
She was earning over $200,000 a year which translated–when adjusting
for inflation–to over $2.2 million in 2010.

Her father was a lover of the opera comique and named her after the
protagonist in Bizet’s masterpiece. It was from his passion for opera
that our icon developed her love for singing. As a young girl she
learned to make hats and opened a successful hat store. This might
give you insight as to how and why she developed her propensity for
her outlandish headwear.

She was a charmer. Born in 1909… she died on August 4, 1955 after
having done a segment on the Jimmy Durante Show. It was during that
show… after having completed a dance number… that she fell to her
knees. After telling the band to “stop da music” he helped her up and
she laughed and said she was all out of breath. She finished the
show… smiled… waved at the audience… exited… went home… and
died later that night of a second heart attack.

She had been heavily criticized some years earlier during a return
visit to Brazil for giving in to American commercialism. In later
years… perhaps in part because of her ostracization… she began
smoking heavily and drinking and taking amphetamines and
barbiturates.

Many of you may remember her as being iconized in Woody Allen’s Radio
days where cousin Ruthie does dances to South American Way in tribute
to our heroine.

Okay. Enough. Let me know if you know who she is. There’s a picture
of the brooch if you still need help. You know where.

For those of you who are new to this thing called Tidbits…may I
direct you to my home page at http://www.tyler-adam.com where you
will scroll down the left side menu till you get to the area that
says Current Tidbits. Click it… and you will see represented on our
pages… a glazed pottery brooch of one of Hollywood’s knockouts.

This of course is the lady in the tutti-frutti hat, Carmen Miranda.
In the 60’s, her movies played again in small movie theatres in
Toronto. The movies were vividly colourful and it was for this
reason, the young “hippies” would gravitate to these small theatres.
The air would be blue with the smoke of mary-jane - so blue, that
people who weren’t partaking of the weed would get high on the
second hand smoke. (Just a little tidbit of my own to add.)

Barbara on a misty night on the island, having rescued the fox
earlier in the week from the mean mean cat. Scaredy Fox.

Carmen Miranda is my guess. Didn’t she also sing about “yes, we have
no bananas”?

“I’m Chiquita Banana and I’m here to reveal - all the good things
that are under my peel”.

NOT ME! It’s just that folks play dirty tricks on us with gray on our
chin!!! Just like last week when I went in our break room to re-fill
my coffee cup. I did everything right! I filled the cup, set it in
the freezer of the refrigerator to warm it, closed the door… and
some danged fool had moved all the buttons over to the microwave! Now
that’s just wrong!

Eddy Cantor sang Yes! We have no bananas.

No you are all wrong it is a broach of me without my glasses…
Although the story he gave is wrong as I’m very much alive… As
proof I off the following pic… I’m the one seated on the left! 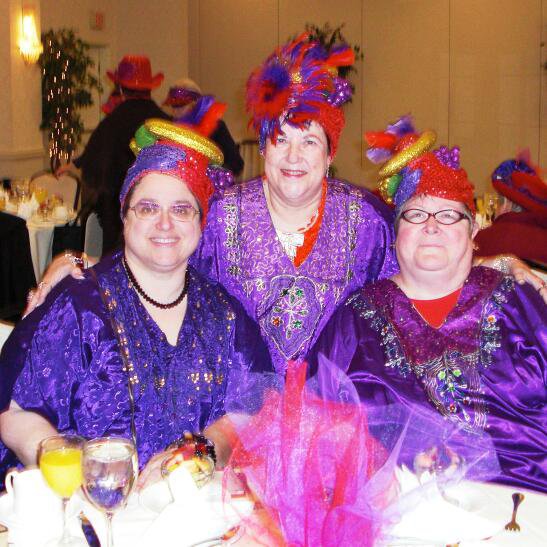 I had it in paragraph 2 - Carmen Miranda, of course.