These Essays are dedicated to very special people

These essays have been made possible by only three people; my Parents and my mentor/teacher!

How did these three people help me to make all of these “Gem Setting Essays” get into my blog?

My Mother (z"l) was a prolific writer and photographer, at a young age of 22 she organized and edited a Jewish newspaper all by herself. I always remember that if someone in her hometown of Manchester asked (her my mail) how the weather was like in Toronto, Canada, she would give a 4 page reply. She always took photographs of us ‘in family pictures’ and her gift of writing and the love of photography got me to do the same even to this day! She always did her typing at night until 2:00 into the early hours of the morning. As she had a physical disability she typed with only one finger!
Her speaking ability was passed on to me, with that, she taught me how to speak to large crowds of people… namely, students in a class!..:>)

My Father (z"l) was a “Diamond Polisher” by trade in Belgium and had a jewellery factory in London, England during the WW 2. He was awarded a contract from the British Government to be the ONLY supplier of Industrial Diamonds for the “War Effort”. No one was allowed to sell these “Diamond Dresser Tools & Wheels”, other than my Father!
Many of his peers were extremely jealous of his abilities. From this innovative technique, all diamond tools came to be now a normal way of cleaning grinding wheels in all of North America even today! 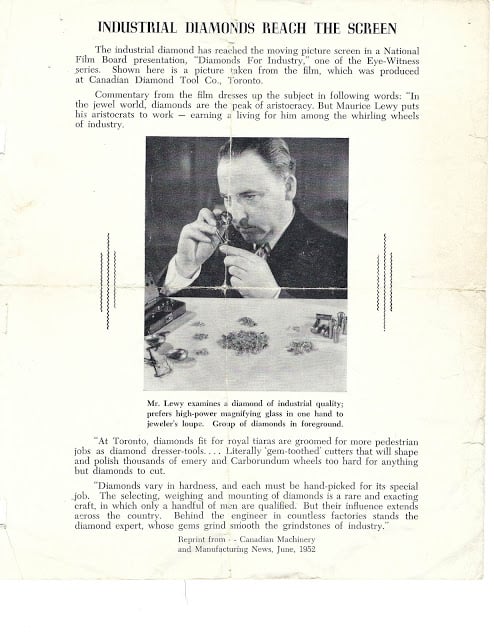 When we came to Canada in 1947, he brought with him this new process & technique of using Diamonds-Boarts for reshaping & cleaning grinding wheels that are used in machine shops. When the film & television media heard of this ultra-new method, he appeared on television and had a short-movie made by “National Film Board of Canada” of this new diamond business. “Lorne Green”, the same fellow from the “Bonanza” television series, was the announcer.

Further to this essay, now comes my own story!

When my Parents finally realized I wasn’t able to get through high school, my Dad got a friend to teach me Diamond Setting. No one in those earlier days knew of what being a Dyslexic is. So off to this jewellery factory at the age of 16, I went and had the greatest opportunity in working with “Mr. Stan Levine”. He taught me literally everything related to setting of gemstones and 'Modifying & Bright-Cutting Gold & Platinum in the art of using gravers. Because of this hard work, I learned Diamond Setting in a 9 year long apprenticeship!

Now with all of this training, writing and photographic skills, you are getting what these three people ‘gave me’. Please use this wealth of knowledge well in helping you to master the many Diamond Setting techniques.

To these three people, I owe so much! BTW, my Maternal, grand-father was a watch-repairman!

Thank you Gerry! That was a great article and I wish we could post it in all of the High Schools to show that everyone has a different talent! We are lucky you are willing to share yours.

Such a beautiful dedication to share…thank you…it is wonderful to have parents and teachers who have generously mentored and role-modeled a life for us that enables us to do what we love…Gratitude expressed and shared is a gift…thank you.

A wonderful multi generational story. You were blessed in that you by passed the traditional educational pathway into such a wonderful trade. What insight from your parents in an era when dyslexia was poorly recognized; not even generally accepted in the 80’s and 90’s when I was teaching. I taught Jewelrymaking and metal working in high school for a number of years and several of my best students were dyslexic. Academics wasn’t their strong suit but they were brilliant and very capable. It was inspirational that they could find an alternate route and shine