All work and no play, you know the story. Does anyone know of any
rock collecting areas in the Tucson area (within fifty miles or so)
that would be a fun dig while we are at the show?

One place comes to mind, it is Patagonia. Directly South of Tucson
and right at the mexican border. there is a wonderful state park
there also with camping facilities.

You will get several sites. Please check with the tucson Gem and
Mineral Society. they have a web site also.

Hi Richard - that’s how I got into this racket, grew up rockhounding
with my family (dad is early member of gem & mineral society). There
are lots of great places, although many are picked over, yes.

There’s a decent book, “Gem Trails of Arizona” that you can search
for by Alibris or at Powell’s online. 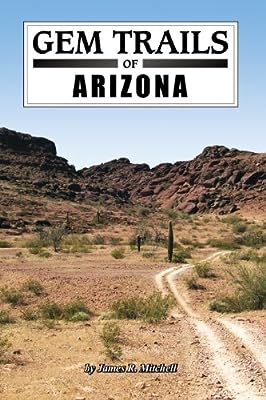 And while I don’t have anything written up about exact places, I’m
sure folks on this list might avail of some directions - I have so
much rough left over from 50 years of family collecting I haven’t
been out in YEARS.

You’ll of course want to check regulations on what land you’re on;
state land is pretty much off limits, but we have 12 million acres
down here of federal land that has some nice areas for “hobby”
collectors. If a FS or BLM person asks, you’re just out for a Sunday
drive. Not a professional cutter. You need a permit/claim for
commercial collecting on public lands. But do make sure you know
what land you’re on, and check from the source if you’re unsure (ie -
call BLM or Forest Service and ask to speak with a resource person,
not the sweet volunteer or secretary at the front desk) - there are
lots of rumors rampant about the Feds “shutting down access” to
public land. As always, go to the source to get the true story!

The Arizona state minerologist office is in tucson on congress ave
Near the GJX show. The folks in that office were very helpful when
I stoppen in to see them and asked about collecting sites near
tucson. Suggest that you contact them.

Correction. Patagonia is not exactly directly south of Tucson. You
have to go directly south to Nogales first, then find the correct
highway out back Northeastward from Nogales about 20 miles. Then you
can ask locals where the road is towards the Patagonia mountains.
There are a few canyon turnoffs a little ways before you get to
Patagonia as well. IF YOU GO INTO PATAGONIA, OBEY ALL SPEED LIMITS!
Otherwise you may very well end up with a speeding ticket. THEY
WATCH! You may contact me directly at @Pat_and_Maribeth_Ter for more
about this surrounding area. I am a born and raised
native to these parts, and know many areas to go have fun in. I am
willing to help all I can.

I’ve jumped into this a little too late, so I hope I’m not repeating
anything already said. I LOVE rockhounding, but haven’t been in a
while. Patagonia used to be one of my favorite places. After you
get up near Camp Washington, or Duquesne there was a plethura of mines
everywhere you turned.

Unfortunately, the entire top of that mountain has been parceled off
and SOLD recently. I went up there (this past spring) for the first
time in a year or two. I was shocked. Even the town of Duquesne has
been sold. From Duquesne, you can only go a short distance before
the whole mountaintop is literally gated - padlock and all. I
stopped and talked to a couple of landowners just before the gate, who
were clearing the land to make their “dream house”, and they confirmed
that everything was sold off.

As we were returning on the way down the mountain, we stopped a
little past Duquesne (about 1/4 mile), where there were no “no
trespassing” signs, and there appeared to be a dump site on the side
of the road. We stopped and while we were poking around, we were
kicked out by the new owners of Duquesne, saying it was their land.

I was deeply saddened, as this whole area is one of the first rock
hounding getaways I experienced here - the views of the earth below
are spectacular - so quiet and beautiful - no one around - such
beautiful land!!

I know one of the roads is still opened and leads to a state or
national forest. There may be other roads to explore, and a few
dump sites lower down the mountain, but most of them are well picked
over, plowed down, etc.

There IS, however, a back road, on the Mexican side, which would
bring you around the back of the mountain and around to the same area.
I remember this being a dirt road, where you pass through lots of
farm land. The road is very narrow and very rough as you go up
(could be a white knuckle experience, depending upon the car and the
driver!). There may be lots more to explore in that direction.

Either way you will have a beautiful ride, but maybe not the
treasure hunt you were expecting.

This is all off the top of my head - if anyone has any further
questions, you can contact me, and I will try to find out more
specific I’m definitely a kindred spirit in the rock
hounding field.

I have also heard reports that the Duquesne area was quite
thoroughly ravaged by profit-hungry folks who cleaned it all out
looking for mineral specimens and crystals to sell.

I drove up there about a year ago. It is now a real long drive for
nuthin’ much there.

It IS gorgeous, Cynthia. I used to go down there a lot with my
family. If anyone heads down there, or anywhere to rockhound out
here, do get the right maps and know whose property you’re on and
what the rules are.

There are lots of big ranches, and yes, some of the old mine claims
ARE private. I own one in the Sierrita Mts, and I do get quite tired
of people coming right on past our NO Trespassing signs (like what is
it people don’t understand about the word NO?) and to our mine just
poking around…my liability insurance is very expensive, for this
very reason!

Remember also you’ll be travelling through absolute prime drug
smuggling territory - just be careful and sensible, like don’t
interact with anyone carrying loaded backpacks heading NORTH.
Seriously, we’ve had some of the smugglers confront a neighbor with
guns recently when they tried to yell them off their land…now you
also know another reason not to trespass on private property other
than just common courtesy.

So don’t trespass, know if it’s fed or state land, be smart, and
have a great time!

I wanted to clarify a couple points in my email regarding
rockhunting. Roseann’s post made me realize this was an important
part of the conversation I forgot to mention, as I was more caught up
in the memories of the beauty and allure of the land.

Regarding NO TRESSPASSING signs, it is something you ALWAYS obey!
Maybe my writing was misinterpreted. When we were kicked out, it
was in an area with NO “No Tresspassing” sign.

Ten years ago, when I first arrived in Tucson, I was taken around to
these different areas by someone who had maps, who has always been
very respectful of private property. In our explorations, as curious
as we were sometimes, we NEVER went into areas that were marked
private.

There are also many ranches that sometimes you can through in order
to gain access to a public road, but once again, we never considered
getting out on private property.

Roseann brought up some excellent points, which I would like to back
up.

Patagonia area IS prime drug smuggling area, and you should be
cautious. It IS important to be respectful, and knowledgable (and
armed with maps and common sense).