Elsa Sarantidou was born in Athens where she finished school. she then left to england where she studies jewelry, ceramics, sculpture and stained glass at Kensington and Chelsea college.

she went on to study design, jewelry design and silversmithing at London guildhall university under the guidance of very famous professors (such as bob Risch, Joel degen, Bryan Marshall). she also attended design lessons at Hetherley’s school of arts in Kensington.a valuable role in her course of action in the area of jewelry played her apprenticeship next to Joel Degen, a designer who significantly influenced elsa’s technique and the style she later on developed. Elsa has collaborated with well known galleries in London such as :electrum gallery, Aurum gallery (England),alternative gallery (Rome Italy), Kath Libbert jewelry gallery (England), gallery la basilica (barcelona), Eleni Marneri gallery, new Benaki museum and new acropolis museum (Athens Greece) and was presented with the following awards : the worshipful company of goldsmiths award, and the British jeweler’s association award.

The exhibition explores metal works whose primary theme is color embraced as their primary visual focus, whether that be using colored materials, exploring creating colored surfaces, or encasing the object in color.

As the world’s largest jewelry related internet site, Ganoksin strives to develop exhibitions showcasing work from around the world. This exhibition was open to all metalsmiths, professional and amateur, advanced and beginner.

Hue is one of the primary properties of color, it refers to the place the color occupies on the visual spectrum. Humans have used hues throughout time, to create cave paintings, to decorate themselves, their clothing and their housing.

Different hues have taken on different meanings throughout time. Gold traditionally has been a color of purity - the metal gold is relatively unchangeable, and the hue of gold has come to stand for gods and goddesses, for royalty, for durability and for purity. Red has often meant love, or passion. Hues often reflect the meaning of the seasons, with pastels referring to spring and the burst of new life after the pale hues of winter. Summer is reflected in vibrant, deep hues, followed by the browning of hues in the fall as plants go to seed and die, and the land turns fallow.

The worth of a hue has often been tied to what is necessary to make the pigment that creates the hue, and the expensive involved in the process. Often created from crushed stones that had to be mined and carried by caravan over thousands of miles, or from fermented roots of plants only grown in certain areas, or the carapaces of rare insects - the creation of hue in a way that could be used by man was an involved and generally expensive process.

In today’s world metalsmiths have access to perhaps the widest range of materials and hues in the history of man - and in some of the most affordable ways ever.

This exhibition celebrates hue - color - as an integral, inherent element of the work. We talk of the “richness” of color, and examples of this abound here. One expects hues from the colors of gemstones used in metalsmithing, but we also have hues from some less expected places. Glass enamels are an ancient way of adding color, as are a variety of patinas. Today’s artists also use synthetic man-made materials to add color in ways that didn’t exist a century ago.

We invite you to enjoy this celebration of hue, and the ways hues and their use have changed over time. 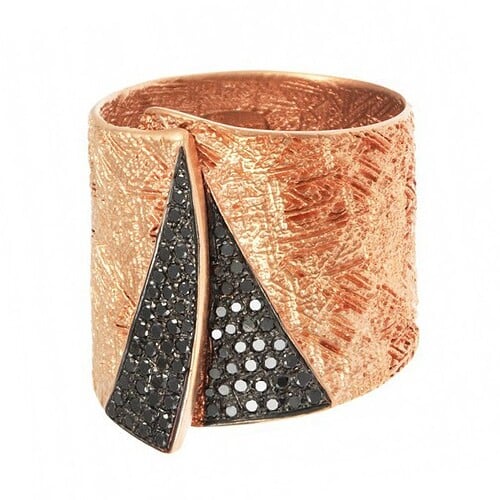