The reliquary for biodiversity is an ark with an endangered rhinoceros on the deck. The hull of the ark is a container which is opened by lifting up the deck.

Reliquaries for Relicts of the 20th Century

Inspired by bejewelled reliquaries in precious metals from the Christian church of the late Middle Ages, I designed designed and made three reliquaries for conceptual relicts of the 20th century - biodiversity, childhood and peace.

Biodiversity of the planet diminished at an unprecedented rate during the 20th century, and the losses are irreversible. The reliquary for biodiversity represents these losses.

Childhood was once characterized by timeless days of unstructured and independent play. During the 20th century, children began to lead highly structured and supervised lives. The reliquary for childhood represents these vanishing qualities of childrens’ lives.

Peace was rare during the 20th century. Global peace existed for only a few weeks in September 1945 when there were no declared wars anywhere on the planet. The reliquary for peace represents the fleeting nature of peace.

Since the dawn of time humans have created containers to hold things that were important to them, from large vessels to hold food and harvests to intimate containers for small precious things. They might hold memories, ashes, medicine, beverage, fruit or food - but all spring from the imagination and skill of the maker. Some have specific religious functions, some are meant for everyday use. When one thinks of a vessel or container the inclination is to think of something with solid walls - yet many of these works involve the exploration of positive and negative space, and the use of negative space to help create the illusion of the wall of the vessel.

As the world’s largest jewelry related internet site, Ganoksin strives to develop exhibitions showcasing work from around the world. This exhibition was open to all metalsmiths, professional and amateur, advanced and beginner. Participants are from The Netherlands, the USA, Canada, Australia, Costa Rica, the United Kingdom, Israel, Hong Kong, Colombia, Romania, Italy, Ireland, Japan, Malaysia and Denmark. While most of the pieces are by an individual metalsmith, some are collaborations, one of three artists spanning 50 years. 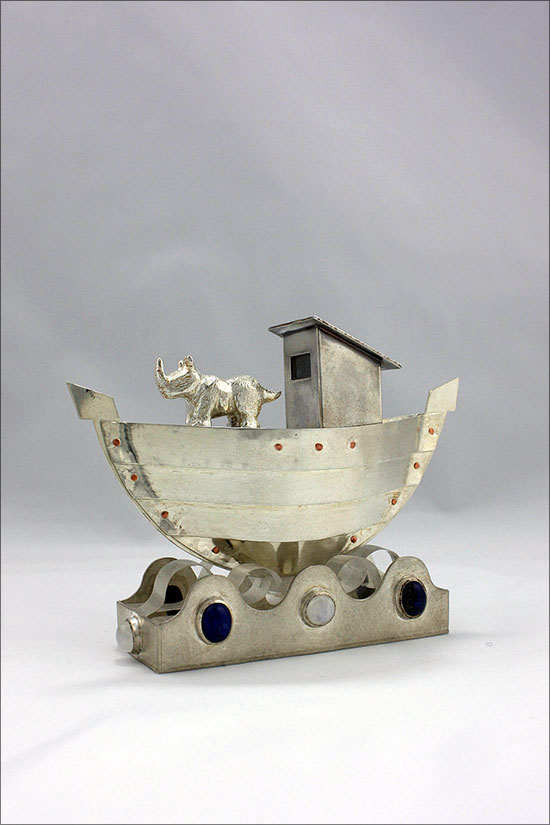