Here’s an odd question for the hive-mind: does anybody know of any
reagent that’s likely to dissolve granite WITHOUT dissolving the
garnets buried in it?

The reason I ask: I just got back from a trip to Sweden to dig up
some garnets to see if I couldn’t find some of the funny ones that
are rumored to be the ones you need for migration period jewelry.

(they’re weird in that they’re reputed to break into flat slabs
easily, unlike normal garnet, which just shatters.) So I dragged my
tail to the top of a mountain in Sweden, chisel in hand, and chopped
some samples out. The problem with this is that the garnets are
buried in a granite matrix, which is harder than they are, in terms
of bashing through the mountainside with a steel chisel. So I’ve got
samples, but most of them are buried in granite. Which I could cut
through with a diamond saw, but that’d cut the garnets too, and I’d
like to see what the structure is at the rear face of the garnet
deposit, where it hasn’t been broken up by what was required to
break the granite open in the first place. In some of them, the
granite is shot through with what I think are garnet
micro-crystals, and I’d like to see what those are as well. Which
argues for dissolving the granite.

Several citations exist in the geochemical literature for using HF to
separate garnet/zircon from quartz at high temperature. Quartz is
also vulnerable to KOH at room temperature. Heavy liquids can also
be used to separate garnet from quartz, etc. after crushing to make
small pieces, hopefully separating the minerals from the quartz. In
graduate school, I used HF at room temperature to etch the fission
tracks left in muscovite and zircon to make them more visible under
microscope. Major problem is that HF is extremely dangerous and
exposure can be lethal. Best of luck in any process that you use.
Gore Mountain in the Adirondacks provided the Behr company with an
anorthosite/garnet rock, from which they could extract the garnets
to make abrasive paper. Proprietary process, to my knowledge, never
revealed to the public.

About the chemistry, I’m inclined to be skeptical, though inorganic
acids will attack feldspars, a component of granite. I’m more curious
about the “garnet”. Do you have any name or description other than
"funny"? Garnet has no cleavage, though it will part along fault
lines or crystal junctions, so breaking into flat slabs sounds like
it’s actually something else, even if locally called garnet.

H2SO4 is the only acid I know of that would go through granite but
chances are that you would lose the garnets as well. I have only
dealt with garnetin rhyolite and the general procedure for that is
smashing. You would have to have a heck of a lot of force to smash
through granite!

Even with hard host rock, most well-formed gemstone crystals will
expose themselves when the material is broken up. In our gem cutting
business, we only care about recovery of facet grade crystals so the
ones that break or crumble during this process are waste anyway. If
you are trying to recover massive or ill formed Garnet crystals from
a hard host rock, you’ve probably already discovered that there is
bond overlap. You’ll see this if you saw along what you believe is
the crystal structure. Unfortunately, the only way I know to
eliminate the host rock that has interbonded at the crystal surface
is with grinding.

Also, in agreement with another post, if you break through one of
these crystals and it breaks with perfect cleavage, it is not Garnet.
That is not to say it has no value. There are many minerals with
perfect cleavage that are worth more than Garnet.

My MFA thesis involved titanium, back in the bad old days before
Bill came up with multi-etch. So I’ve used HF.

Have absolutely no interest in ever getting within 50 feet of it
again. Been there, done that, have the degree, and all my fingers. I
call that a win.

My goal was to etch away the granite, so I could see what the
crystal structure is at the rear of the deposit face, where it
hasn’t been blown apart by dynamite.

(And to see what the micro crystals really are.)

It really is garnet, and it really does ‘cleave’. It’s a very
oddball deposit, one of only 2-3 in the world. There’s a reason I
flew half way around the world, drove several hours, then bushwacked
to the top of a mountain in the back of beyond to go get these
things. The garnet body is shot through with planes of ?mica? that
act like the sheets of paper in a stack of sliced cheese.

So it doesn’t ‘cleave’ like a diamond, but you can break it out into
flat(ish) slabs. Not flat enough, it turns out, and certainly not
easily, but I’ve got enough material to test with, which was the
goal.

The ultimate goal was/is to figure out the nature of the stone
cutting for migration period garnet jewelry. How’d they get all
those flat slabs? Before you say “a lap”, please remember that the
first surface plate wouldn’t be made for another thousand years. And
the garnets are FLAT. Some of them to within angstroms. So how’d
they make flat garnets with no flat reference surface? With no
abrasives harder than garnet itself, and no substrate to lap on
that was any harder than the garnets. The garnet powder would be
chewing up the lap faster than the garnets, and the stones
themselves show no trace of rounding from a chewed up lap. So what’d
they do?

That one had been bugging me for a couple of years, but I finally
figured out a way to do it that they could have easily done in
period, that doesn’t require a reference flat, or any fancy tools.
It’s almost automatic, once you get the basic rig built. (Details
forthcoming once I get them published officially, or find out that
it’s a bad idea.)

Thanks for the help. I was hoping somebody had an ace up their
sleeve that I didn’t know about.

Fascinating. Do you know of pictures anywhere?

I agree wholeheartedly about HF. Used to use it to clean quartz
labware, and I remember the panic once when my boss thought I might
have splashed some on me. Immediate trip to the medical office, and a
severe lecture from the doctor. Even if it doesn’t cause cardiac
arrest, it will penetrate tissue and eat your bones.

So far as I know, there aren’t any pictures available anywhere,
except the ones I have from last week.

So here you go. 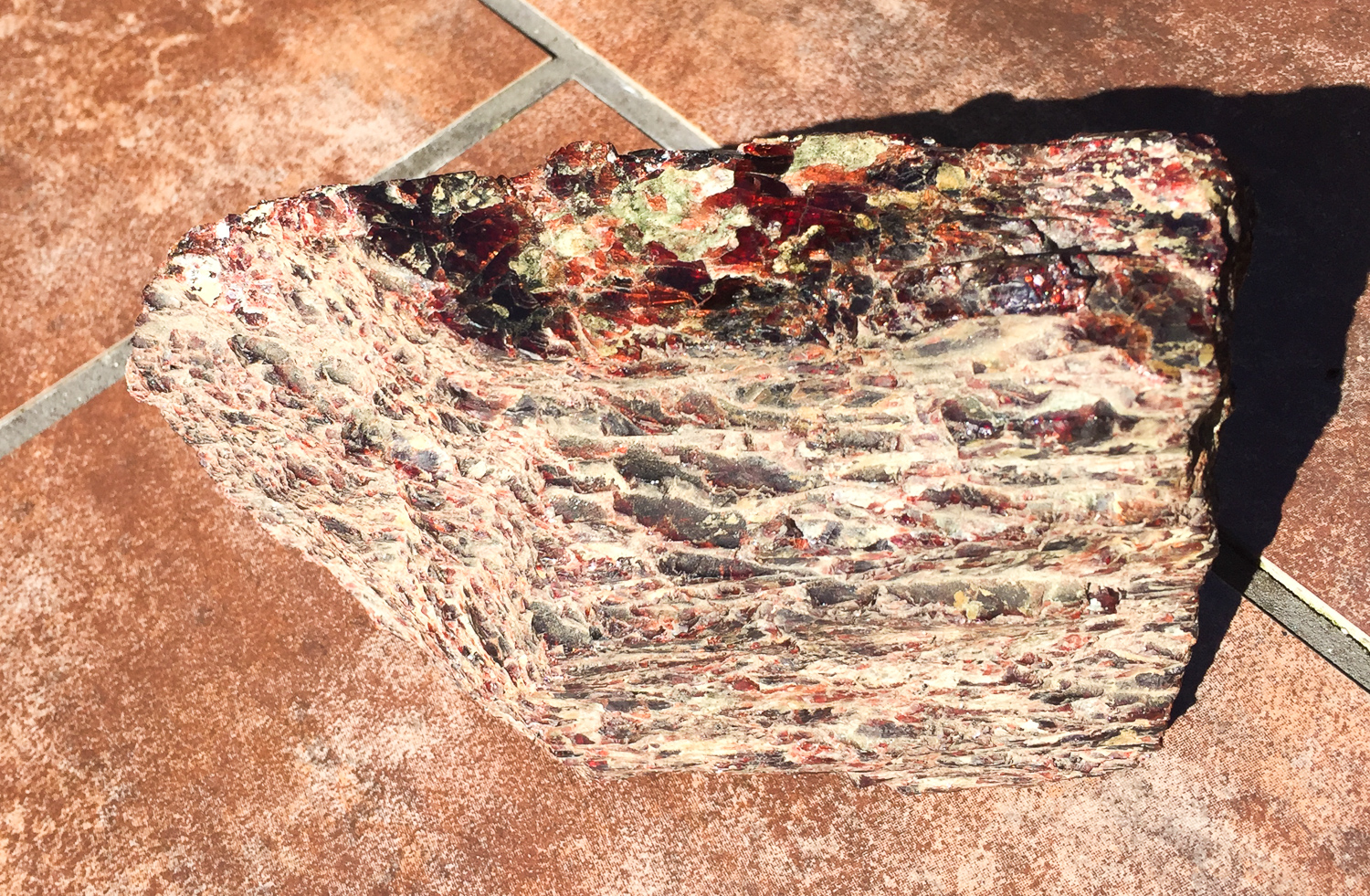 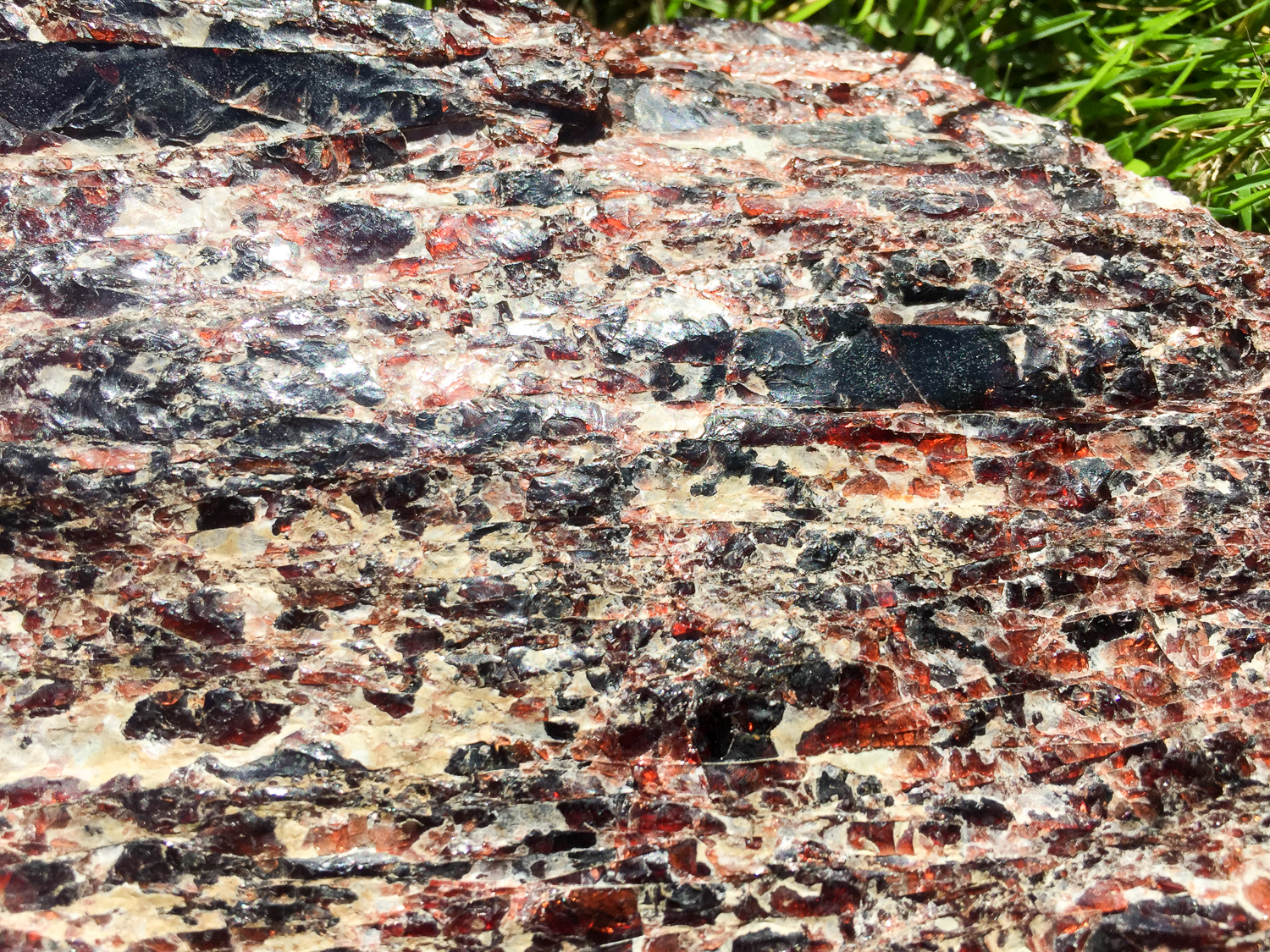 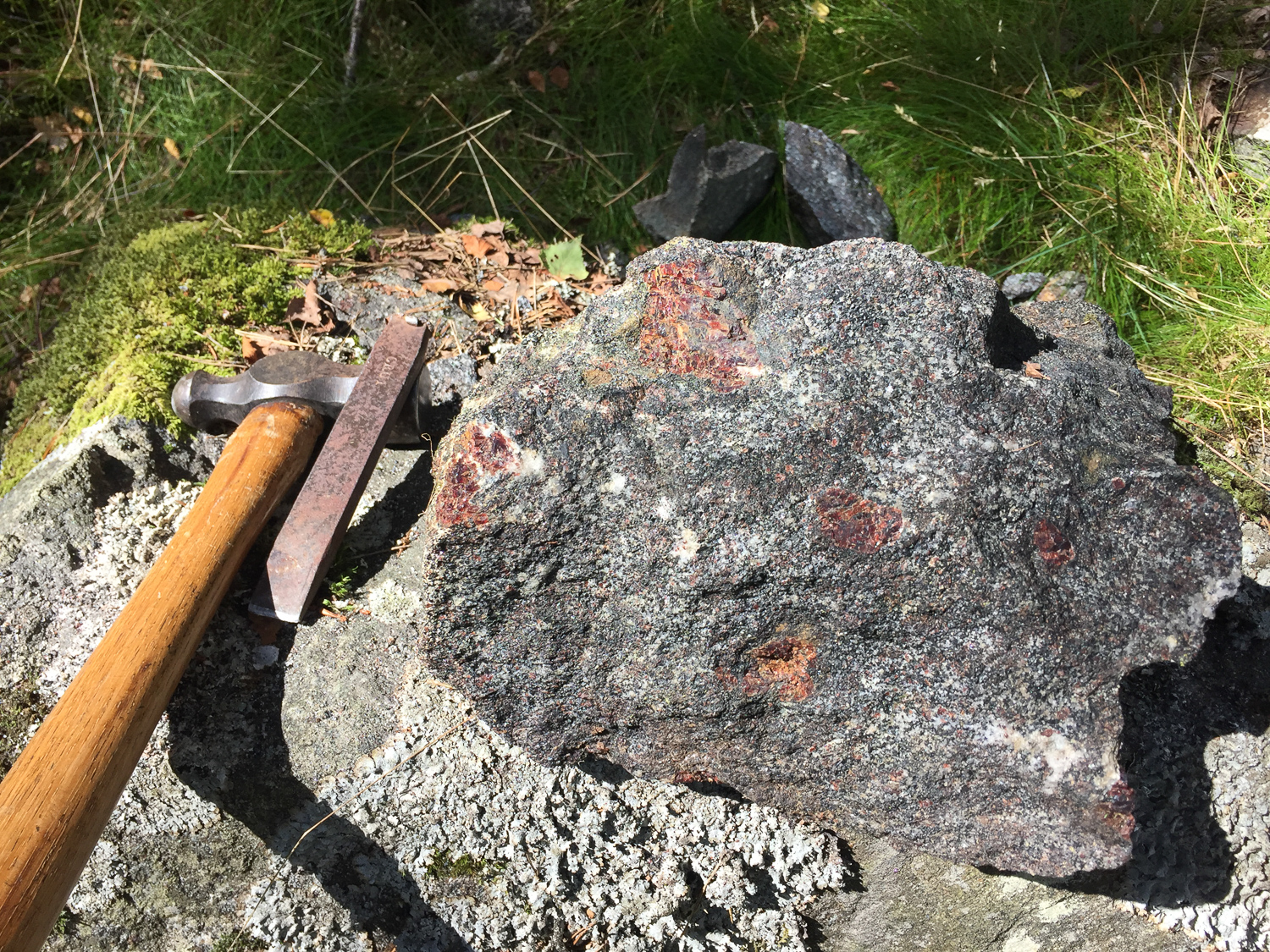 The first two are “the great rock”. It’s probably one of the largest
pieces ever to come off that mountain. Alas, it did not come home
with me. It’s in the collection of one of the locals. It’s about the
size of two fists. You can see the white stuff ?mica? in between the
garnet planes. The whole thing’s been folded and kneaded, so the
mica planes aren’t anything like flat or straight, but at least you
get the idea.

Before anybody gets too gung-ho about trooping up that hill, chisel
in hand, the next picture shows what’s up there now: lots of
marble-to-golfball sized deposits in hard rock granite. Big ones
like the great rock are RARE.

If it weren’t for the oddity of the mica shear surfaces, and the
possible connection with migration period garnet jewelry, this
deposit wouldn’t be worth bothering with. The stone’s not very high
grade, and it’s fractured into a thousand pieces, even internal to
the deposits. (The last serious work on the mountain was done with
dynamite. NOT the thing you want if gemstones are your goal.) The
largest solid pieces I got out of it were about 4-6mm wide, by about
2mm thick, with most smaller. Lots of gravel, in other words. But
chemically significant gravel.

Yes, I am familiar with such garnet masses. There is an area in
northern Idaho in metamorphic rock associated with the heat from the
Great Idaho Batholith. They occur there in black biotite mica seams
and are crusty and not of any gem quality. Also in the same vicinity
are garnets that have a nice crystalline shape perhaps a third of an
inch across. They are swaddled in the biotite and evidently formed
after the biotite did. The mica continues right on through them on
horizontal planes. Another interesting feature nearby are large
garnet crystals. I have picked up some the size of small walnuts but
the University of Idaho has some softball size. No good for gems
though, they are grainy and go by the name of "sand garnets locally.

There are gem quality star garnets in other locations. However, most
of the plain almandine garnets are too dark for allowing light
penetration. Someplace near the Oregon\California border there are
masses of grossular garnet that are a rather muddy green color which
have been used in lapidary projects. Rose Alene

Thank you. That formation probably reveals a lot of history to a
geologist. The only place I’ve seen garnet in situ is upstate NY,
where they break it up to make sandpaper.