Need to replicate a hollow charm

I was wondering if it was possible to replicate this elephant with out cutting it in half to get a mold. The charm needs to be hollow.
Thanks in advance,
Matt 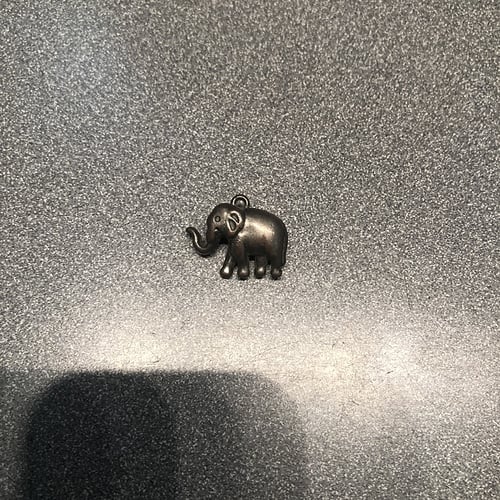 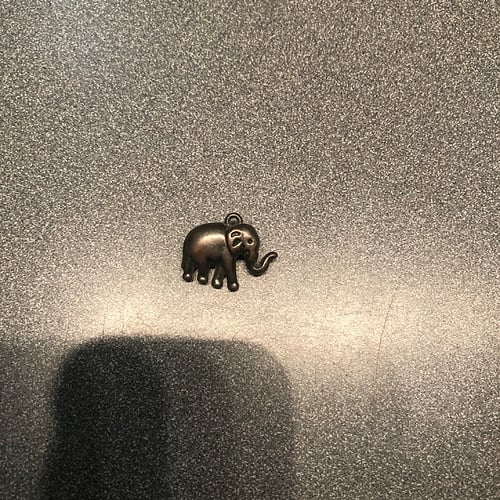 Other than making a wax impression and then lost wax cast it, you can cast it using Delft clay. It would be solid, but there are ways to make it a bit hollow too. You could also make a model of each half out of hard polyester resin and then form thin sheet over the resin impression using a hydraulic press. Trim the edges and solder the haves together. You probably wouldn’t get all the detail unless you used very thin sheet. I am interested in what others have to say as I have a similar project in mind…Rob

You could do it in a two step process, though there will be a lot of labor involved.
Make a non-shrink mold of the original.
Shoot two waxes.
Remove the suspension rings, then file/sand each of the waxes down to the midline, so you’ll have a left and a right. If you simply sawed one wax in half you’d lose the thickness of the kerf.
Hollow each of the halves to an appropriate thickness.
Cast and clean the two halves.
Make a mold of the two halves using a Y-shaped sprue.
Cast, clean, solder together, add jump ring, and polish.
It’s a lot of labor, and will be quite a bit heavier than the original as cast metal cannot be as thin as a stamped shell.

I remember Many years ago a company spray-painted a wax form, but drilled holes in the bottom of each wax item. The wax was heated in a steam-oven and the wax literally bled out from these two holes. Karat and trademarks (mini-plates) were soldered on afterwards.
The process was using a metallic-paint as a base and one or two more layers of the metallic paint was sprayed on.

This process is called “Hollow Form”, it is completely hollow and many grams lighter.

(I’m speaking of 20 years ago and many of the finer details have escaped me, so sorry!)

You could make it out of either a base metal clay or a silver metal clay. Silver is easier because it requires only one firing. There is a shrinkage factor, the amount determined by the selection of clay.

Make a two part mold out of this from Amazon 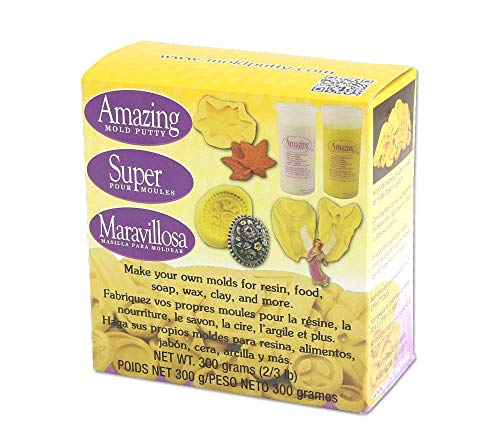 Make your own molds for resin, food, soap, wax, clay and more with this amazing mold putty. It is quick, easy and safe. The entire process takes less than twenty-five minutes. It is food grand and FDA compliant. It requires no equipment, cups or stir...

.
Line each half of the mold with rolled out clay leaving empty space in the middle. Once clay is dried, remove from mold, slip together both parts. Let dry. Sand edges. Add a small roll of clay to the top for a bail (or add a commercial bail or cut wire before slipping both halves together.) Let dry. Sinter in kiln. Tumble. No need to add a hole- metal clays are porous and don’t require holes for hollow forms.

Thanks everyone. It seems like the easiest thing to do would be cut it in half. I’m just not sure if the person would be alright with that. Better to know the other options first. Thanks again

Does the charm have to be hollow? What metal are you making it in?
If silver it won’t be very heavy if it’s the usual size of bracelet charms. And the cost of metal will be minimal compared to the cost of your labor if you have to make the new one hollow.
If it’s to be in gold, even then it may be cheaper for the client to have it solid than to pay for the labor of making a hollow one. Depending on the size of the piece, of course.

Electroforming in any precious metal could be the answer,but quantities pay for themselves instead of a single piece.
Khushroo H.Kotwal

What an interesting dilemma. I’ve done similar challenges with ball shapes and one with an alligator with mouth open. My thought process is a mix of several of the posts. First make a mold of the charm as is. Second create a wax from the new mold. Third with fine blade open from the tail around and over the back such that you can remove inside wax. Fourth invest and cast as a new model, with the opening you created your investment will flow inside creating the core. Fifth make a new mold of the model. Inject waxes, cast, and clamp together and solder.
It will work but it is a huge amount of labor for a few grams of weight saving.
But it would be a fun experiment.
Regards RLW

There have been several casting discussions lately where I have suggested looking into Delft clay. The argument is that you can’t cast complex shapes with Delft clay. This is true to the extent you can’t cast undercuts. I have had some luck casting shapes that are irregular as long as they don’t have narrow spaces or undercuts. Attached should be a couple pictures of a real arrowhead and a Delft clay casting of the arrowhead. I have not cleaned the casting up other than to polish the surface that resulted from the casting process. As others have argued, in a pinch, a quick Delft clay casting may be all that you need…Rob 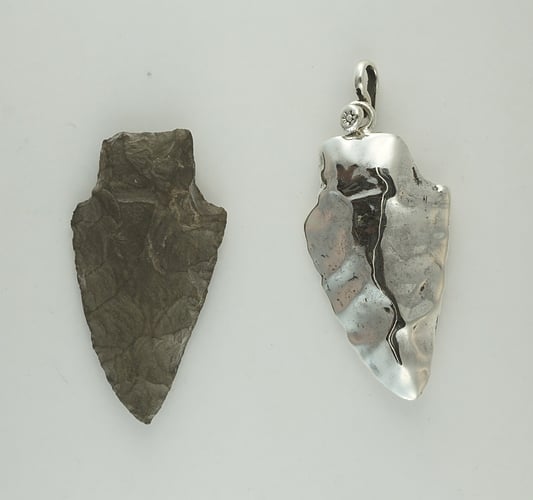 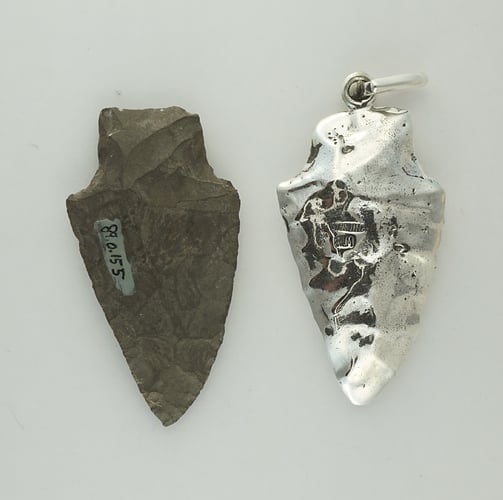 @rNot to be disrespectful, delft clay is often fun. My main enjoyment comes from; wax to model master to mold to replicated waxes to objects.

How does your post relate to the topic of hollow? It would be VERY difficult to create a delft core on jewelry size pieces.

Also full disclosure I’m not in the craft for business or monetary gain I consider myself a technical hobbyist with a very small amount of artistic talent. And if @matthewfullum would contact me, I’ll assist in getting his project to a replicable wax stage with a vulcanized mold.
Regards RLW

I too am a hobbyist and waste a lot of time doing things that I could never get paid to do. Casting an arrowhead using Delft clay is one of them. My hope was to see if, with a little bit of effort, I could cast an object with a different front and back in Delft clay as long as there are no undercuts. The object in the original post is one such object. I think that you can, with a lot of effort, cast it in two pieces with Delft clay that allow it to be hollow after you solder the two pieces together. I don’t really know why, if your goal is only one piece, that it needs to be hollow. In the end, years ago, I realized that I didn’t want to carve wax models and cast them in metal. This was after I bought all the equipment to do just that. I learned that I prefer to manipulate metal, not wax. Most of my Delft clay casting is done to make odd shaped ingots that can be forged, rolled, ground or manipulated in some way towards a desired end. Maybe some day I will waste a lot of time and cast a hollow object using Delft clay just to see if I can do it. Thanks…Rob

Sorry it took a while to get the measurements. After some comments I realized it does look smaller in the picture than it actually is.
The dimensions are 1”x 0.75” and 3/8 deep. I almost only have worked in silver, but my assumption is that for 14k the price difference will be significant for the solid cast compared to a hollow version. I really wanted to cover all angles before saying I can do it or an estimated cost prior to taking on the job.
Matt

I would think that PMC would not be suitable unless you were prepared to put up with the considerable shrinkage that sintering entails.
One possibility is to cast solid, which is straightforward, then plate with gold.
Another, which I have done in the past on several occasions, would be to draw the separation line round the original then press it into plasticine or other wax and clay based modelling material, as far as the marked separation line. Press locating holes into the plasticine, and a channel midway for a sprue. Make a rubber mould on top, then when cured, invert, remove the plasticine, brush the exposed rubber with separator and make the other half of the mould. This gives you the two half moulds in rubber.
The next part relies on the fact that molten wax at exactly the right temperature (I would stress that the temperature is critical) when poured into a rubber mould, will pour out again leaving a neat half shell of wax set on the rubber. With care, you can get wax shells of any thickness you like, all the way from transparent to solid, and all the time preserving the model detail on the other side, by repeat pours into the existing wax.
Trim the edges, cast the two halves as normal and solder together.