Does anyone know what these tools are and how they are used? (Photo below.) They are among a group of old tools an engraver acquaintance of mine purchased some time ago. 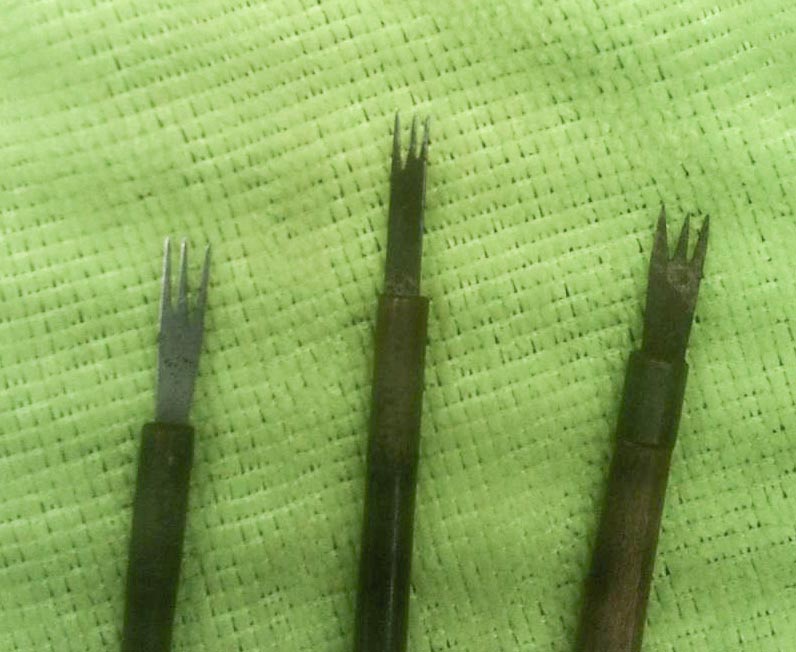 My first thought was homemade wax carving tools. Homemade because the spacing of the tines is uneven. But the irregular spacing is the same on all three so maybe that’s deliberate and they serve some other purpose?

I think they’re used for getting little tiny bits of meat out of lobstah claws.

Seriously, if they came from the estate of someone known to be an engraver, it’s possible that they were used to consistently mark the inside and outside of borders, sort of a fixed divider. The spacing seems to be slightly different on each set of three, but proportionally the spacing appears to be very close to the same on each tool. They’d be very useful if that was their purpose.

It’s also possible that they were used for removing rivets or other small nail-shaped parts from watches or the like. They look sort of like miniature hand-made automotive ball joint removers.

Just a couple of guesses, I really don’t know.

No real answer for you, but I’ll happily speculate. The spacing to me looks roughly like a golden ratio. I agree with the speculation that they might be for marking out a border around the edge of a piece or when making design elements, then engraving them.

WOW @mklahn although I might agree with you I’m amazed that you could discern that from the photo. @davidphelps7 is likely close with his border remark. The spacing does not appear to be identical so the olive approach is the least likely. However regardless I REALLY like this mystery theme. After all its the exercising the creative side of our brains or the funny bone in the elbow. MORE PLEASE

Thanks for all the ideas, from olives to engraving!

A little more information just came to light. The bag of tools had been found in the basement of a clock shop and the new owner (not a clock-maker himself) sold the whole lot to my engraver friend. In addition to the little forks and other tools were five or six millgrain wheels with the same homemade wood handles.

Patricia,
Funny thinking here, but its not how the old engraving alchemist used these mystery tools… but how YOU could put them to good use.
Other than a fabulous dry gin martini cocktails tool you might try seeing what they do on soft materials, dragging, pushing /digging in, swirling, rotating, used against a slightly raised straight edge (like a painter’s mall stick so nothing else leaves a heavy handed smudge mark). When you see their pattern & scoring capability, then proceed to soft metals. Have fun with your new toys.
One man’s technology is another artist’s toys.
Eileen

Actually I’m inquiring on behalf of my engraver friend who has the little pitchfork tools. He did, however, make me a gift of the millgrain wheels, so I will be playing with them!

Thanks again for all the responses!

I don’t honestly think this is the same thing, but interesting coming across it while this post is active; kind of fun to watch too: https://instagram.com/p/BbfL5-QDi9p/

Could be that. Looks like something I would make for a lathe or
something.