can somebody help me?

how to make the spring for tie clips like the ones below? 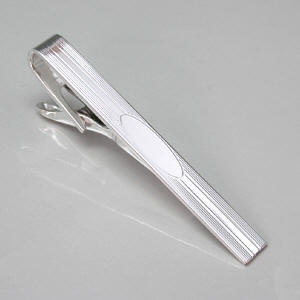 Maybe you could extract a spring from s hairclip. The really big
toothed type that looks like a bear-trap.

Nobody tries to make those, we just buy them. You could, if you were
really set on making it, get yourself some “memory wire” from
Metaliferrous or Rio Grande, but I doubt it would work as well. See
if you can get a cheap, costume version and scavenge the spring from
that. I do know how to make springs like that, I learned it from one
of the Williamsburg gunsmiths, but it’s not amateur sport, no
offense. It involves things like molten lead, stainless steel foil,
and the flash point of linseed oil, etc.

I would agree with one reply (Huffman) Nobody makes money clip
springs (anymore). It’s simple enough to do - roll out a piece of
silver, or gold sheet, anneal it, roll it (or planish) don’t anneal
it, bend it and you have a money clip. The issues are, though, that
it is an inferior money clip to begin with, it will only work on a
certain thickness of bills - if you exceed that, then it won’t work
anymore on a thinner amount, you cannot solder anything onto it,
and it is destined to break in a year or so, and since you can’t
solder on it, it becomes scrap metal. There are many fine springs
for sale out there - I haven’t looked in some years, but Rio Grande
has always had some. Or, as some suggest, buy a cheapie, dissect it
and use the design with a real spring…

John Donivan brings up a point about the spring problem that I
hadn’t thought of. Perhaps, decades ago, before I became so
indoctrinated to the kind of thinking that is more typical of the old
hardcore tradesman, I would have approached it this way.

Find a spring, or several springs, and design the money clip
yourself so that it can utilize that particular spring! Build the
clip for the spring, not the other way around. I’ll bet Charles
Lewton-Brain can still approach things that way, that was always his
style, if I may be so familiar. And while your at it, if you can get
one spring, get some extra ones, just in case you want to make
another one.

IJS makes Money Clip bodies in sterling, Nickel “silver”, and red
brass. They are sweated on to a face plate, or even engraved
directly. They are just metal strips just folded over.

John, you are accurate in saying that there’s a capacity threshold
with the money clip. We at IJS like to think that’s a loss reducer in
the unfortunate event of a mugging.

I can be hailed off-list for money clips, tie clips, and so much
more. We do have a “gator-jaw” tie clip, as well as a “slice of a
money clip” tie bar. Just not many cloth-tie wearers. It’s more of a
bola-tie crowd we service.

Why even bother with a coiled spring concept, when there are other
methods of creating tension.

Even nicer if everything was completely hidden.

I realize that the following strays from the original topic. That
said:

I don’t mean to be contrary but I have made a number of money clips
of the type you’re referring to and I’m afraid my experience differs
considerably. I’ve used copper, brass, stainless steel and silver and
in all cases the durability of the clip depends a lot on how thick
your material is. I typically use 16 g stock, particularly for the
non-ferrous metals.

If a money clip is well hardened, either by heat treatment or work
hardening, then it should be able to accommodate a fairly wide range
of bills. In general my clips can hold anything from a couple bills up
to about 10 or so; I’m assuming the bills are folded in half as is my
custom. While this obviously won’t handle all circumstance it’s
usually more than adequate.

I’ve never had a clip fracture or break as you’ve described. I
suppose that would be possible if the clip were seriously abused and
forced well beyond it’s natural capacity but that abuse would be the
fault of the user not the clip itself.

If one does find that they’ve sprung their clip a little by
over-stuffing it a good squeeze at the fold-over point is usually
more than enough to snug it up. Again, I’ve done this for years and
still continue to do so successfully.

These comments generally apply to the non-ferrous metals. Stainless
steel is a whole different ball game as it offers a much higher
degree of springiness and is much less likely to suffer from being
over-stuffed.

Cheers,
Trevor F.
in The City of Light
Visit TouchMetal.com at http://www.touchmetal.com