I’m making jewelry as a [hobby] (read: future career). I have been
challenged by a guy at work that if I can find him a 5-6ct mandarin,
portuguese cut garnet, he will have it set in a ring.

While I am not yet good enough to make the ring & set the gem
(flush-set), it’s something I will do in the future. In the
meantime, it would be a big coup for me to find his fantasy gem. (I
know a local jeweler who can do the setting.)

I have done mild Google research for the gem, and have not found it
online. Can anyone recommend a gem dealer who has the stone? Caveat -
his limit it $3000, and I have to make something on it.

Yes, I have a (FL) resale / tax certificate.

best regards, and a Holy Ramadan - Merry Christmas - Happy Hanukkah -
Sanctified Kwanzaa! to all that is good & right in the world,

You might have some luck with either of these gem dealers- I’ve
filled unusual requests with both- and they’re quite nice to do
business with:

Kelley, your request is not so difficult. I quickly went to
http://www.gggems.com/Malaya_garnet.htm Just to look. I’ve always
known them as Malayan garnets - they are most accurately called
spessartite garnets. Many here, including me, could probably get you
a nice stone in the New Year. I Googled for “Mandarin Garnet” and
got many hits, too. As for the Portugese cut, it’s not really likely
you’ll just happen on any stone that is just that cut, but it’s
easily done by a good cutter, if your guy really insists on THAT
cut. He just needs to buy the stone before it hits the wheel, is all.

My friend James Alger (Tel: 1.800.446.1556) has some very beautiful
Mandarin Garnets. He recently supplied me with an exquisite 3+
carater for a pair of earrings.

I have purchased mandarin garnets from Ben Kho, Kho International,
Ltd.; Decatur, GA. He’s repeatedly an AGTA award winning faceter,
again in 2008. I don’t have his # off hand, but I’m sure you can
find him in AGTA source book, or by googling.

Mandarin garnet is a bit imprecise, especially as I understand you
were given a challenge.

If mandarin garnet is a reference to the colour, than it is not that
difficult and search on “spessartite” or “spessartine” should yield
some results. If “mandarin” used as a trade name, it refers to the
garnet which comes from Namibia and known to gemologists as
"hollandine". Hollandine crystals as a rule do not exceed 10
millimeters in size, so cutting a 5 carat stone is out of the
question. Namibia has another source of “mandarin garnet” which comes
from Kumene River. This garnet has another trade name of Malaia
(Malaya) and 5 carats size is not restrictive. You have to be very
clear if Malaia garnet would satisfy the condition of your challenge.
While “mandarin” and “malaya” used interchangeably they are quite
different. Malaia is a mixture of spessartine and pyrope, while
hollandine belongs to grossularite garnets. Another name you may
encounter is a hessonite or essonite garnet. Since portuguese cut was
mentioned, which is highly unusual for garnets, I think that
hessonite may be the stone you are looking for. Hessonite can exhibit
a “heat-wave” effect and portuguesse cut is a good way to minimize
that.

If it is a hessonite you are looking for, the condition of the size
of the stone may be impossible to meet.

It is critical that you understand the difference between hessonite
which is commonly available, and hessonite (hollandine) from that
particular location. I have also seen hollandine and spessartine used
as it would be the same stone, even in publication which one would
think should know better, so clarify with the person who gave you the
challenge if this distinction is important to him.

This is not what I have always understood and I’ve purchased
Namibian “mandarin” garnet in Tucson directly from GEM Namibia, the
miners.

There’s an article on spessartite (including mandarin) here:

A couple of quotes:

Thanks to you & another reply (off-list) I believe I was given an
"impossible" gem to find. I’ll check into the specifics and see if
he’s more interested in the color than the name.

So far my understanding from his statement is that he wants a large
stone of a certain color, in a certain cut (that he’s probably seen
before & fixated on), and he’s somewhat aware of the going price for
it. He’ll be amused if I don’t find it, and amazed if I do (AND he’ll
pay up, but only if I can have it set for him - another hurdle…)

May you all have a happy, safe & profitible season -

When “mandarin garnet rough” first appeared it was found that some
hessonite was mixed in. It had no economical consequence because
quality was good, but it was interesting. Since there were 2 sources
in Namibia, some people theorized that hessonite came from second
source. It is not the case anymore. Nobody officially admit to it,
because a gemologist would rather allow himself to be electrocuted
than to say that hessonite was confused with spessartine. To be
completely objective it is rather understandable since some
spessartine from Namibia has what some dealers call "sleepy look"
which is easily mistaken for hessonite “heat-wave”. We cannot be sure
of that because location is not producing anymore. The reason I
brought up is the challenge did not make sense to me since
spessartine is available in large sizes. But it does illustrate of
how confusing the “trade name” could be.

I’m very familiar with gem trade names! The points I was trying to
make are…

Once you’ve seen high quality mandarin garnet, it’s hard to mix it
up with other material (though I’m sure there are occasional
specimens of other material that approach it). It is the orangest of
orange stones. I’ve never seen anything else like it!

For some reason, the link to the article I quoted from was dropped 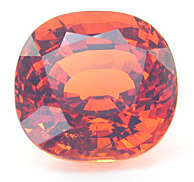 The decade of the '90s put spessartite garnet on the map. Once a rare collector's gem, the brilliant orange garnet burst on the scene in 1991. Read on!

While it is certainly true that “Mandarin” is a name originally
coined to describe low-iron spessartite from Namibia and it is also
true that, at its best, the low-iron variety exhibits a higher degree
of saturation than the material from either Nigeria or California it
should be born in mind that “Mandarin” is not the official name,
rather it is a marketing name. Further that most Namibian Spessartite
is highly and visibly included. Many Nigerian stones are superior
when you consider all four Cs (color, cut, clarity and crystal).
Personally I like the term, Mandarin, it fits Spessartite and never
did like “tites” very much, can you think of a bigger turnoff from
the point of view of romancing the stone?

Richard
Secrets Of The Gem Trade

Home - Secrets of the Gem Trade

ABOUT THE SECOND EDITION Even more to read, learn and enjoy This second edition has been enlarged and largely re-written. Completely revised and expanded with 11 new chapters focusing on Jade, Demantoid Garnet, Natural Nacreous Pearls, Conch Pearls,...

I have some Nigerian material large enough. Contact me [offline] if
you still are in need and we will work out the details. Subject line
Mandrin Garnet.

Problem is that there is no way to use it “correctly”.

What is mined in Namibia is a combination of spessartine and pyrope
and that mixture has a particular orange colour. Pure, if there is
such a thing, spessartine alone can have the same coloration. There
is another trade name used in description of high grade spessartine
"Aurora" which was in use before “mandarin” to indicate a particular
reddish-orange hue. Does that mean that it cannot be called
"mandarine" ?

If we would use mandarine as indication of geographical location, we
would be in trouble also, since there are other gems mined in
Namibia. So you should see that there are no good way to use this
term. It may be convenient, but the result is confusion.