I’d like to post this again. There is a new approach to artistic jewelry that encourages artists to create a line of inexpensive pieces to augment their handmade works. This is being taught at some schools and is worth consideration. Don Friedlich is teaching a class that I plan on attending through a grant and will write about. It is being offered by the Society for Midwest Metalsmiths at Maryville University in St. Louis. It is a topic that ignites controversy and also is practical, hence my interest in learning more.

Workshop Description: Making a living producing one of a kind jewelry is very difficult. There is a limit to what we can make with our own two hands. The great majority of full time studio artists develop some sort of production line of more affordable work.

This two-day hands on workshop will focus on the design and development of a production line that makes creative use of readily available and easily accessible industrial processes, such as casting, laser cutting, commercial photoetching and more. Don will individualize this workshop and work with each participant to clarify your personal artistic voices and then utilize that knowledge to design and fabricate prototypes for a production line.

Well, I do both and can say it really depends on the reputation you have built up over many years and the clientele your aiming at.
Now there are jewellers here that operate in the $4,000.00 range and thos that operate at the $40.00 price bracket.
Both are valid. As to odds it depends entirely on you the maker.
As to the post that prompted your reply, ill deal with that in another answer…
Ted.

Hi Me1,
Ive reread our posts on this from Aug 10? I believe, and cant add much more other than to comment on the “Easily accesible casting, laser cutting and commercial photo etching”. you can find all this by your self!
If it was me,
I. Id ask on this forum who does contract casting?
2. Look in your yellow pages for laser profiling near you. Now I use a couple here in Dorset UK,b for the contract work I do. They will happily cut steel, stainless Steel, ali, then brass and copper with difficulty. Asking them to cut sterling sheet is uneconomic. They normally work off 4ft by 2ft sheets. As mentioned before the way that jewellery is mass shaped is with press tools and dies. you should look at using the proposed grant money to find this basic equipment I mentioned here.
For an example I regularly go to a scrap yard for metals , I make lots of stuff other than jewellery, and there was a lovely fly press , rated at 5/6 tons complete, not damaged! for $60.00. Well, full steam ahead home to get the trailer and back the 40 miles to get it before anyone else had it.
It really is all out there.
As for photo etching, its a poor way of decorating metal. I much prefer the boldness of repousse type relief work.
Says more.
Ted.

Thanks for your comments. It is my understanding that these processes are much better understood and utilized in Europe than in the United States. So it has been very hard to attract students to this class. But it seems that students in their 20s are conversant in it.

I want to learn more about these techniques so I can start writing about them in some way that is intelligent. My work may not be affected as much, although the use of castings has been extremely helpful to me, such as the simple necklace with fern leaves.

Unfortunately, I can’t look in the yellow pages for answers. I live in a profoundly remote area – less than 15 people per square mile. However, the automotive industry and all of its innovations is down state in Detroit. That is another venue I’d like to crack. 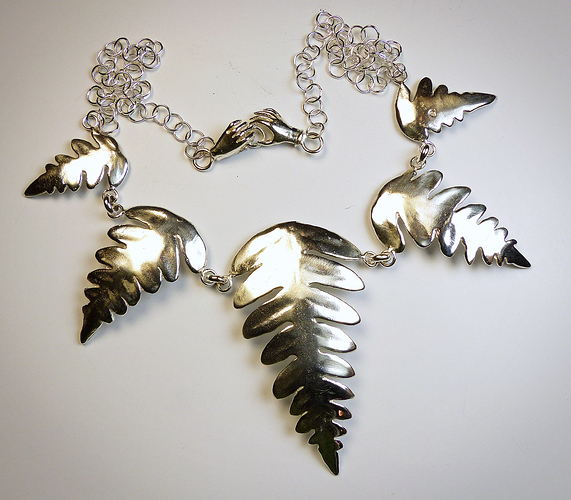 I’ve been watching this thread with mixed emotions. Partly, I don’t want do rain on Don for teaching what are badly needed techniques, and partly I’m just surprised he needs to. It’s sort of like teaching a class in breathing.

A lot of what he’s proposing to talk about should be bedrock knowledge for anybody who’s thinking about making this a life. It’s a hard row to hoe, made harder without proper research before jumping into it.

Admittedly, I’m a tool geek, and have been associated with the tool making side of the field for most of my life, so I’m used to people who already know these things, but even when I was doing the craft fair thing 20 years ago, everybody else in that scene was scrambling as hard as they could to automate, and mechanize as much of their production as they could. And designing around the processes they could do quickly or efficiently. I had a rack of 4 large donut polishers running 24/7 with my production line stuff, and the line was designed with mass finishing in mind from the get-go. (and vulcanized molds, etc.) Why do you think you suddenly saw that explosion of ‘pillow’ formed stuff in the early 90’s once the Bonny Doon presses came out? Fast, simple, and looked good.

So I’m just sort of surprised that this needs to be taught. Clearly it does, and that disturbs me for what it says about the state of preparation of the rising generation.

I’m not sure that I understand what the concerns are about this class. Maybe I missed something….

In any case, let me say up front that Don Friedlich is a friend and colleague. I should also add that he is a very highly regarded maker and has, from the beginning of a long and successful career, used outsourcing and non-jewelry specific avenues as a way to make the production side of his work. While I have no doubt that others on Orchid have figured out how to utilize and scale “industrial” processes to the making of jewelry, Don was an early adopter and has amassed a great deal of information in this arena.

Yes, there are many avenues and resources available to us all now courtesy of the Google-box. Many of us avail ourselves of these opportunities and even enjoy scouring the web and ferreting information out. But there are others who would profit from a more condensed and distilled approach. Information aggregated along with specific recommendations. Is choosing to take a class like this any different than opting to take a bricks and mortar class in soldering, casting, chasing, stonesetting or fabrication—dare I say using the flex shaft-- at a studio class at a school, art center or private studio? Certainly all that information is available online. Yet no one questions the value of those real-time classes.

I’ve never taken a class with Don but I believe that this is a great opportunity.

Andy! Thank you. New generation jewelers and their professors are aware of these opportunities. As a design reporter/silversmith, I am interested in the conversation about innovation.

I came across this blurb, which may explain what university students are being exposed to and why:

From Art Jewelry Forum interview 9/25/2017
As a jeweler who incorporates new technologies into her own work, do you see an increase in the integration of technology and contemporary jewelry?
Su san Cohn: Jewelers like to play with making. There has always been a fascination with emerging technologies and new advanced materials in contemporary jewelry since the instigation of the contemporary jewelry movement in the 1960s. This follows a historical tradition in jewelry to take advantage of materials and making processes which are readily available.
Why do you think this is?
Su san Cohn: Often these preoccupations are driven by the competitiveness between universities. Object-making departments will buy the latest state-of-the-art equipment to attract students to their courses, and consequently then try to be leaders in how the technology is used.
This leads to many outcomes. Sometimes exciting work is made, but often the driving force is use of the technology rather than why the object or jewelry is being made. In addition, I’ve seen instances where the technology is so sophisticated that due to OH&S, students aren’t given direct access to the equipment, so they need to rely on technicians to make their work. Sadly, this results in a loss of making skills.

Hi Betsy and Andy,
1stly, I wondered with a pop density of less than 15 , where are you customers on a regular basis ? ie to make a daily living from your work?
.The leaf necklace is a pretty good way of making a product by mass casting. How many dozens did you make and sell?
however,
I thought id google from here in the UK to ask?, for,
small machinery dealers in the Detroit US area, I had some 800,000 hits!
Then likewise laser profiling ditto, some 200,000 hits, so theres NO shortage of helping Co’s near? maybe? where you live.
Visiting a laser profiling co and talking with them will teach you more than any course would. Likewise a few machinery dealers will open your eyes as to whats on offer and for how much.
2ndly, who might be I asked the target audience for this course,? any established artist jeweller will have done his research as to which direction he wishes to go with his work, , as casting has been around since the Pharoe’s time.
Now laser profiling is a great tool, but its only a small part of the product design make and marketing process.
One would normally test the market with a “New” idea having made it by hand, then if its flying off your bench only then invest in a production run using this way.
Then you need the marketing skills for such a product. One pr of hands business and wholesale dont really jel.
Ill give you an personal example, I chose to interpret the art of the torque in a historical context, one period, out of 10 ranges, the dark ages, needed a design that was “Dark” pagan and reflected the turmoil after the Romans left our isles and before the Normans arrived, some 800 yrs later.
So surprisingly I chose the polished and fire oxidised colour of 316 s/steel tig welded together with argon, the fastest way, to achieve the required result. A big contradiction of context to the material of choice!.
Now that would warrant the use of laser profiling if I need to but it didnt. so it was made all in house…
AND most importantly, I already had other historical lines on sale, so it wasnt putting all my eggs in one basket. And yes they do fly off the display.
I dont see a beginner getting his hands dirty with this process and investing in the time and materials on the off chance it would be a winner.
So both casting and laser profiling will give you the shapes in volume, then theres the rest of the making process.
S/steel is difficult enough for us pros, to get smooth enough on the edges to be safe to use as jewellery after shearing or profiling…
Barreling wont give you this. It normally has to be done by abrasive machines with the work held in the hand. A labour intensive process. Ive bypassed this in my designs and have nice rounded edges and that is of course a well kept trade secret. Why? as its too commercially valuable.
Which is fair game, if its been done before it can be done again.
I looked at Don’s work and with the support of the Corning? glass studios made some interesting explorations of glass in jewellery.
Well done.
Ted.