Hi guys. I’m wanting to start out on my own, and I have been given a
smallish room to use. Any thoughts on a basic set up until im up and
running would be wonderful. I have my own pliers and files- thats it!
If someone could send me a list maybe, or some good ideas for
home-made equipment, I would be most gratefull.

Andrew, I’m sure you’ll get a ton of duplicates to this, but get a
copy of Charles Lewton Brain’s “Cheap Thrills in the Tool Shop”.
Check Amazon 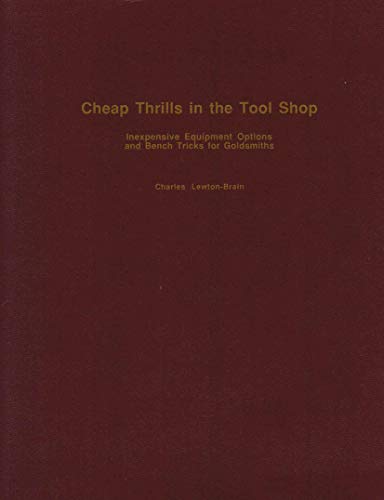 Others have and probably will mention Charles Lewton-Brain’s books
and such, much of which can be read on line here at Orchid/Ganoskin
from a link at the bottom of all e-mails. Tips From The Jeweler’s
Bench, is a quite excellant and generous free posting from Charlse
and others. Some of the Health and Safety tips and articles should
be regular reminder readings for all! Browse often there’s ususally
new articles and sound advise.

$145!!! And the used-book stores are charging about the same for
their copies. Surely it didn’t cost nearly that much originally!

I’m trying to borrow the book through Inter-Library Loan, an amazing
resource. Keeping my fingers crossed…

Ouch, and much more than it should be. Here is the description that
Charles sent to us:

Cheap Thrills in the Tool Shop

. This is a loose, eclectic collection
of short cuts, bench tricks and alternative equipment options for
goldsmiths. Cheap tool making, tool conversions and unexpected
sources for tools are all described. Sections include shop machines,
tools, setting tools, soldering and more. Lots of drawings, lists and
reviews of sources round out the book. A good index and table of
contents make finding easy. 80 pages crammed full of
82 line drawings. retail=$24.95

I am pretty sure we have it in stock at our store (I am writing from
home). We sell it at the list price given above and would be glad to
ship a copy. If we are out we can certainly order more.

Tools and Equipment for Jewelers

$145!!! And the used-book stores are charging about the same for
their copies. Surely it didn’t cost nearly that much originally!

Geez. At those prices, my copy will be the best damn financial
investment I’ve ever made. Hey. I’ll sell you mine for the bargain
price of just $125, plus shipping (grin).

Seriously, have you just asked Charles? Perhaps the high prices in
those used book stores are based on the fact that they weren’t
published through the large normal publishing houses, and Amazon

, et
al, may not know where to get them, or what they sell for.

As I write this, the starting bid, for a copy on ebay, sold direct
from Brain Press, is 22.95. And if you go to Charles web site right
on the Ganoksin site at
http://www.ganoksin.com/kosana/brain/brain.htm, it lists for 24.95,
and can be had if ordered from that page, at the discounted price of
22.45.

I suggest buying several, and selling the extras to Amazon

, or your
other favorite used book sellers, who don’t seem to know what they
are… Who knows, maybe they’d be dumb enough to bite?

And Charles, if you’re reading this, have you considered contacting
Amazon to offer your wonderful, rare, and valuable tomes there?
Perhaps they’d agree to carry them in stock, after having paid you up
front for multiple copies at the discounted/wholesale price of 39.95?
(which will give them a whopping 300 percent markup, at least) Did
you know your books were being priced so high as used copies? Go do
a search on Amazon

, just on your name. They estimated a hundred and
a quarter for the photo techniques book, and more than that for the
hinge based mechanisms one, both of which were listed as “out of
stock”…

This surely can not be right. My copy is a sprial bound soft cover
that I think Charles did himself. Are you sure you didn’t ask for his
latest book which is a translation of a German text. I’m sorry that I
can’t think of the name.

No, Marilyn , you read it right. That is indeed what Amazon thinks
they want for it, and similar to what they think they need for a
couple others of his reasonably priced books. But that’s not what
the books actually sell for from Charles. At least not yet. My
guess is that faced with the query, and with no idea where to
actually get a copy, Amazon

just shoots very high on the estimated
price. Makes for fun reading, and promotes that Amazon might not
always know what they’re doing…

I couldnt find the original post of this so I cut and paste from a
reply Marylin Smith gave in the latest Orchid Digest. But here is
a few suggestions for the person who is looking for this book.

First , you might try Charles Lewton Brain’s website and see if you
can still purchase it directly.

Secondly, you might contact me directly and I will be happy to loan
you mine. The book has many good tips to try for youself. I
however could not say it is worth anywhere near $145 dollars. And I
have all of his books and respect him as one of the masters of the
trade.

Oh, the other book which was translated from German cost $70 dollars
and is well worth every penny.

I’m getting a picture here. Amazon

trying out over-the-top prices
on Charles’ book. Tim McCreight’s rendering book out of print, etc.
Wouldn’t it be a great idea for Society of North American Goldsmiths
to begin providing a source for these materials, getting them printed
and selling them for reasonable prices? Aren’t these works the
legacy of some of our best in the field? By the way, have people
checkout out this site yet? http://www.craftbooks.com/home/home.asp

I think this company at one time had somewhere around 20 books on
jewelry and metalsmithing alone.

Amazon has three copies listed in their used book section. One is
actually new, for $145, and two are used, for $189.50 and $190. Note
that all three are being sold by other booksellers. I found another
new copy listed for $204.75! There are no used copies listed at my
favorite internet sites, indicating how useful the book is to its
owners. The 10 publications available from Brain Press are listed
heRe: http://www.ganoksin.com/kosana/brain/brain.htm Ray

I checked his website. It lists the book, and gives a great price,
with discount if purchased by ordering from the website. But – I
could not find any way that it could be ordered from the website!

What am I missing??
margaret

I hope this helps

Dear David, I am in the process of preparing to move to much smaller
quarters and curtailing my metalsmithing activities. This
necessitates selling off most of my library of close to 200 hundred
books relating to jewelry and silversmithing. I have not written up
a complete listing of what is available as yet, but if anyone is
interested in a particular book, it is quite possible I have it. I
will be able to send, as an attachment, the complete list when I do
finally type up my inventory to anyone interested .

I do have Charles’ book, “Cheap Thrills…” but I’m not selling it
even at $145 since Charles quotes one of my tips in that book, and
it is autographed to me.

Thank you Orchid, Joe Dule. Note: It would be helpful if anyone
responds to use the following address DrDule1@aol.com

While I would love to sell my book for $145.00 (curses to Amazon,
they keep denying my books are in print or availalbe!!) all my books
and papers are in fact in print and available. And at a 10% discount
if you ask for it from us! ($22.45 for Cheap Thrills for instance).

So, please ask Amazon to sell my books, and if they won’t we’d be
glad to. Email me off list if you are interested. @Charles_Lewton-Brai1