I had someone bring me some elk ivories (Elk canine teeth
apparently) & he would like one of them made into a pendant & the
other into a tie tack - - - he gave me absolute freedom as far as
design etc - - - & there is no rush - but I’m not sure where to
start to even get them ready for making the items that he wants.

The teeth are in their natural state - not polished beyond what
nature polished them & have the somewhat fibrous root still
attached. Any wisdom on how to prepare these for setting?

The ones I have set for customers, as per their instruction, was to
cut the top of the tooth off and it is used as a cab. There are
images available if you Google Elk teeth jewelry. The tooth that is
used is what is called the bugler, used to produce the mating call.

I’ve made about a dozen of these each year for 30 years. They’re
very popular in my area. I’ve made about one of every variation. I
have some elk portrait molds I use over and over. I’ve made earrings
out of rabbit teeth, pendants out of mink phallus ivory and on and on
with all kinds of animal parts and even human teeth. Search Google
image for elk tooth rings to get some ideas. The ivory can be cut
with a separating disk and polishes very nicely with Zam or your
regular compounds. Don’t leave it in the ultrasonic solution for too
long or the ivory may stain. You can bezel set about 1.5-2mm deep in
the ring without too much concern of damage to the ivory. Use 5
minute epoxy to ensure it if you want.

I am following the suggestions with intrest, since I have a handfull
of elk ivories to do something with.

One thing that puzzled me, Richard, about your post was your
statement that the tooth is used to produce the mating call. Here in
the middle of the Idaho elk country, elk are an everyday conversation
item. Just after reading your post, a friend of mine at Weippe, well
aquainted with elk, called and I asked him about the tooth in
relation to sound. He began by saying that there are many colloquial
names for the ivories, including “whistle tooth”. However, the bugle
is produced by a deep resonance from the whole body of the animal
with his mouth wide open. My friend recons that a bull with every
single tooth in his mouth pulled would have no trouble producing the
sound. Furthermore, he stated that elk bugle at all times of the year
for communication and that cow elk will bugle, and on rare occasions,
calfs. The little pip, pip that elk calls make is a sound the females
(without ivories) use to call the males. I wonder if the huge European
ice age elk had ivories. Rose Alene McArthur, Central Idaho

I got so curious about this that I have been wandering around on the
internet reading about elk and ivories and teeth for about three
hours. It sounds like female elk do have ivories. I find one
reference to ivories in a three month old female calf. An elk farmer
had it in a squeeze chute and it threatened by curling back its lips
and showing it’s ivories. Hmmm. As for the Irish Ice Age Elk, it
sounds like it was actually a huge deer (They have a rack of one in
the back area of the Museum in Golden Gate park and its antler spread
is well over six feet.). As a deer, it would not have had ivories.
Rose Alene

If the ivories are fairly new you may want to boil them for a few
minutes. There is a nerve inside the tooth and it helps before you
cut the top off. If the ivories are older than this is not a problem
since the nerve will have dried out over time. If you are making a
pendant from the Ivories you could either cut the top part of the
tooth off to use or you could use the entire tooth. I have created
pieces both ways with a cap over the root

Have a great day
Greg DeMark

Wikipedia entry on the elk

Various Cervus elaphus subspecies The elk, or wapiti (Cervus canadensis), is one of the largest species within the deer family, Cervidae, in the world, and one of the largest land mammals in North America and Eastern Asia. This animal should not be confused with the still larger moose (Alces alces) to which the name "elk" applies in British English and in reference to populations in Eurasia. Elk range in forest and forest-edge habitat, feeding on grasses, plants, leaves, and bark. Male elk have l...

Wikipedia entry on the moose The moose (North America) or elk (Eurasia), Alces alces, is the largest extant species in the deer family. Moose are distinguished by the broad, flat (or palmate) antlers of the males; other members of the family have antlers with a dendritic ("twig-like") configuration. Moose typically inhabit boreal forests and temperate broadleaf and mixed forests of the Northern Hemisphere in temperate to subarctic climates. Hunting and other human activities have caused a reduction in the size of the moose's...

First sanitize in anhydrous peroxide (OxyClean original for an
example - it has to be mixed in extremely hot water to activate it)
regular first aid/oral rinse peroxide isn’t strong enough or a
bleach solution .Just an aside while speaking about animal bones*:
*armadillos and opossums skeletons can carry leprosy so one may wish
to avoid working with their remains under any circumstance- even
those calcified and old can be problematic if ground with any
sanding band, bur, etc.). Neutralize, dry and polish to the desired
finish- it may be sealed if necessary or if you wish to colour the
teeth by french polishing or a good renaissance wax (microcrystalline
wax) that can be tinted, if a glossier appearance is desired shellac,
lacquer will work best or you may want to use a marine varnish to
add a degree of waterproofing before setting. I saw a set where the
jeweler graduated the teeth, shaping the tops to be set as they were
covered in a cap. The cap was a bezel with an engraved and pierced
design made from a modified cone shape (which had to be laid out for
each tooth) including a bail in the pattern so, when closed each
hung nicely and to make the decoration easier in designing it as a
flat workpiece before soldering the top to band. Additional grains, a
few stones in the large central teeth, and wire were used to decorate
each cap. The majority of the work was in 18 kt yellow gold and in
between the teeth were some olive green gold leaves, brown and rose
coloured golds for acorns and chrome diopside, smoky quartz, and
banded citrines used as accent stones. It was very Victorian in
appearance. I hope this gives you some idea. or at least a starting
concept. . rer

Cut or grind off the root of the tooth leaving only the crown, When
I have made items with the ivorys no further prep was needed other
then a good cleaning, the staining is left in place and is thought to
add to the character of the ivory. The staining will eventually wear
away with use, leaving only the ivory, and you might want to mention
this to your customer.

The Brophol book “Theory and practice of Goldsmithing” devotes a
couple of pages to Hunters Jewelry, (Elk Ivory Jewelry) on pages
448-450 to give a different perspective from what we do in the US.

Be very careful when cutting off the root, there is nerve tissue in
the tooth that you do not want breath, issues with a disease in Elk
called chronic wasting disease caused by a protein variant called a
prion.

You should also wear a mask, if grinding anything organic. Animal
teeth, bone, shell, etc. The dust being organic, can cause a good
case of nasal infection… I use to cut elk antlers and make
buttons, and contracted a really “good” sinus infection. …

I’m usually not quick to post, as I’m so new.

I have a friend who does prehistoric fossil work. Recognized artist
in the Pacific NW. Pendants, knife handles, antlers. Last year he had
a lung infection. They could not fix it or find what the cause was.
Turns out he had cancer. A type not seen. Once he told them he works
on fossils they did further tests and it was some sort cancer from
prehistoric spores. He’s still fighting to live. He had an incredible
shop, filtration and mask system. He was told microscopic spores
passed everything and there was no immune system resistance as there
has been no exposure to dino and mammoth tusks for so many thousands
of years.

Enclosing a picture of one handle that took 130+ hours to carve with
a Foredom. This was not an un-versed person. No one suspected
anything like this was possible. 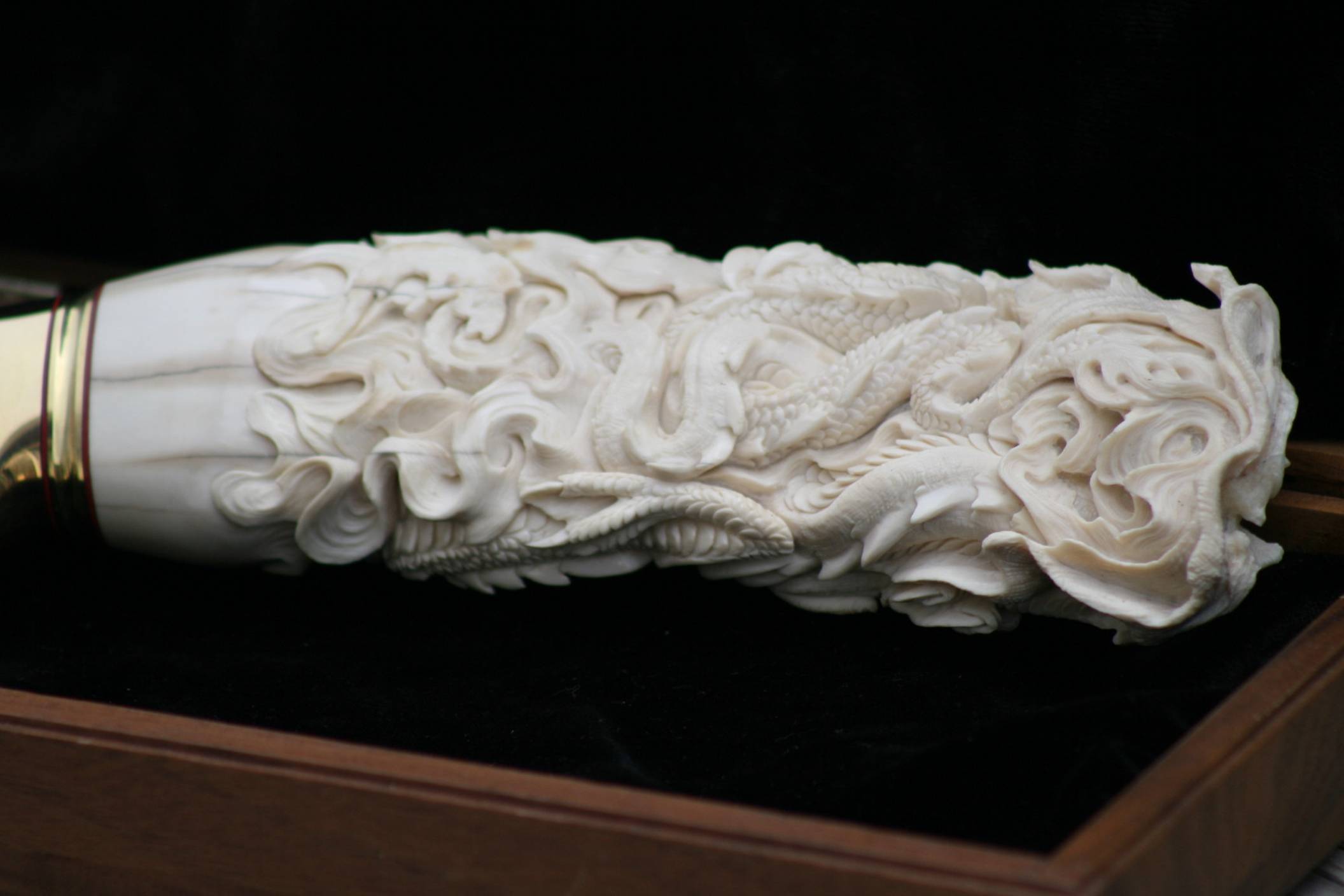 Wow Charlie, Your friend does incredible work. I hope he recovers to
continue in another medium. Good warning to all of us who work with
fossil stuff. Sheri