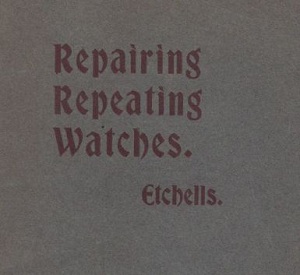 A practical treatise of vexatious repairs that come to the
watchmaker are those on repeating watches. Not every watchmaker can
make them, and that is just why they are profitable.

For those unfamiliar with repeating watches they were intended
mainly for use in the dark. It utilized a form of work allowing the
watch to strike the time at will. The time would be repeated on a
bell, gong or the watch case itself.

A repeater is a complication in a mechanical watch or clock that
audibly chimes the hours and often minutes at the press of a button.
There are many types of repeater, from the simple repeater which
merely strikes the number of hours, to the minute repeater which
chimes the time down to the minute, using separate tones for hours,
quarter hours, and minutes. They originated before widespread
artificial illumination, to allow the time to be determined in the
dark, and were also used by the visually impaired. Now they are
mostly valued as expensive novelties by watch and clock enthusiasts.
Repeaters should not be confused with striking clocks or watches,
which do not strike on demand, but merely at regular intervals.

As with all the Ganoksin project books the text has been scanned
using OCR (Optical Character Recognition) which means it is
searchable and useable in ways not seen in a standard pdf. Similarly
the images are separately scanned and then stitched into the text,
allowing you to zoom in for very high magnification views of the
detail in the images.

Over the last three decades we have acquired over 40 rare historical
Metalsmithing books that we will make available to jewelers,
goldsmiths and the metalsmithing community.

The manuscripts will be gradually published in a digital format over
the coming months. For the first time in history, these ancient metal
tricks and recipes will be made available to the contemporary
community of curious artists and metalsmiths. This will
allow the reader to apply the simple and ingenious procedures used by
the jewelers of the past, long dead masters of the art of
metalsmithing. Many of the tricks and recipes described will save the
maker money, as older approaches can sometimes replace modern tools.