Can anyone explain how to cut the corner keys in a castaldo rubber
mould. I’ve watched a few videos of castaldo mould cutting but can’t
quite see how they are cutting the keys.

The focus is a bit off, but this shows the cutting of the corner
keys pretty well. 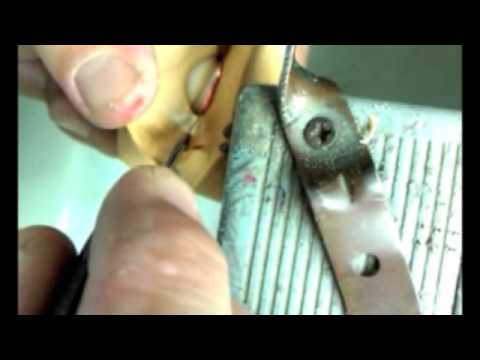 The company Alkiviadis C. Efthimiou is active in the jewelry industry since 1987. Over the past 15 years we became the experts of manufacturing the mold of your prototypes in various types of silicons, so you can produce wax models for casting...

I cut them similarly to the video. A thing I do differently is also
cut, up and down in the field of the mold to create two surfaces
that will lock together over the entire contact surface. Not just a
keys in each corner and then smooth in between. I think doing that
helps the two halves line up perfectly.

Well George, the video that Elliot posted is ofsomeone who’s just
aching to cut off their finger tip, it seems. It’s like the guy on
the wood lathe that was posted a month ago - “Don’t try thisat
home”. I redid our website and just now realized that I didn’t link
my mold making article, but it’s also posted on Castaldo’s site so
not all is lost: http://www.ganoksin.com/gnkurl/ep81bu

Pics are below on the page. Basically, you clamp the corner to open
the first, all around cut, push the scalpel in and down at a steep
angle and cut downwards on the left and right sides, re-clamp on the
flap ofrubber you’ve just made and then the rest is easy… Look
at the pics… John

There are lots of tricks when cutting molds. One thing that helped
me when learning years ago was to occasionally send a tricky one out
to a big casting house, have them mold it and cast what I needed
then return the mold to me. It was helpful to look at how people who
cut molds all day would tacklethe problem. It can get pretty
complex, with corkscrewed cuts that pull out or removable sections
that allow for easier wax removal.

When I do it I am always thinking about getting the wax out as
easily as possible, while trying to keep the seams on the edges
instead of having seams go across a flat surface. A common practice,
imagine molding an simple 8mm wide, plain wedding band, you cut so
when you pull one side of the mold away it has been cut so it covers
the whole outside surface of the band and the otherhalf pulls out
the core of the band. So when you pull the two halves apartthe band
just about pops out.