Congratulations to Charles Lewton Brain, who has just been named
this year’s recipient of the Saidye Bronfman award which is given for
excellence in fine crafts.

*Toronto, February 28, 2012 - * The winners of the 2012 Governor
General’s Awards in Visual and Media Arts were announced today by
Robert Sirman, Director and CEO of the Canada Council for the Arts at
TIFF Bell Lightbox. Each has, in their own way, made a mark on
Canada’s dynamic art scene through their groundbreaking work. They
aRe:

In addition to a $25,000 prize from the Canada Council, the winners
will each receive a special issue medallion sponsored by the Royal
Canadian Mint.

“Throughout their careers, the 2012 winners of the Governor
General’s Awards in Visual and Media Arts have surprised, touched and
inspired us,” stated His Excellency the Right Honourable David
Johnston, Governor General of Canada. “Let us celebrate these
Canadian artists whose creativity and talent we can all be proud of.”

“Artists are alchemists, and the 2012 Governor General’s Visual and
Med= ia Arts laureates are masters at transforming everyday experience
into gold,” said Robert Sirman, Director and CEO of the Canada
Council for the Arts. “These awards celebrate artists who have played
a key role in shaping the Canada of today, and who continue to have a
lasting and positive impact on our culture.” BiographyCharles
Lewton-Brain

Charles Lewton-Brain has made a lasting mark on fine crafts both in
and outside the studio. His jewellery - distinctive in that it shows
the natural outcomes of tensions that occur when metals are pushed to
their limit - has been exhibited across Canada and abroad. He teaches
at the Alberta College of Art and Design (1986-present), and has
written extensively on goldsmithing techniques, safety and studio
photography. He and his spouse, artist Dee Fontans created and ran a
centre for jewellery studies in Calgary (1991-2002) and collaborated
to introduce jewellery into performance art works. A tireless
innovator, Lewton-Brain created his own publishing company, Brain
Press, cofounded Ganoksin.com, which has become the world’s largest
free online resource for jewelers, and invented a technique called
"foldforming," which uses simple hand tools to rapidly shape sheet
metal. He has served on the boards of the Canadian Conference for the
Arts, the Canadian Crafts Federation (president for two years), and
the Alberta Craft Council. He has lived in Calgary since 1986.

Congratulations are due to all those who won. Speaking as a former
student of the Saidye Bronfman Centre, this is great news! Special
congrats to Charles Lewton Brain!

Best wishes to all
Barbara

I have quite a few of his publications, all well worth the money
spent.

Definitely a leader on our field.

Thank you very much for the kind comments. I dedicate this once in a
lifetime event to the Ganoksin Project, to Hanuman and Ton, to all
those who have built our place over the years.

It is the most important award in Canada in the field, top of the
list etc. Thankyou all, and to our community for this.

Here are some links to further info: 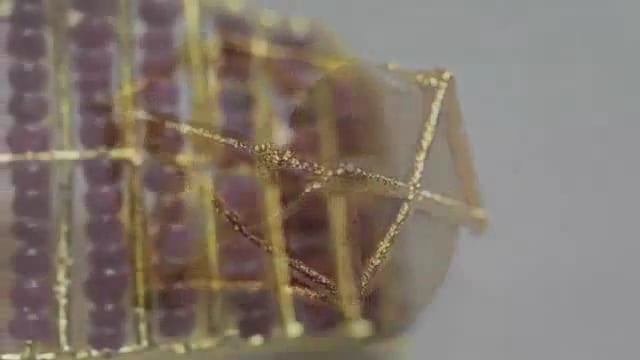 Artist-goldsmith Charles Lewton-Brain describes his approach to jewellery-making and how he finds inspiration in nature. Governor General’s Awards in Visual and Media Arts 2012

info on the award
http://www.ganoksin.com/gnkurl/1so

Here is my acceptance speech.

Having served the crafts community for many years I understand what
this award means, and appreciate the currents that flowed together to
choose me this year. It is a profound honour to represent the crafts
community through the award.

It is wonderful to have my work affirmed, that my artwork is valued
by the culture. It is lovely when the world says what you do is good,
when others can see through the vehicle of one’s objects and acts to
share in moments of vision.

My work is about drawing, about mark making with material and about
the tension between nature and structure. It is about culture, the
restrictions we self-impose and choose, about being witness and
aware. And then there is the teaching, a living dance between minds.
I have joy in the passion of synthesizing, describing and telling the
stories of materials and process, sharing understanding and having my
thinking prodded by questions from students which increase my
comprehension of the world.

A very big thank-you to my spouse, Dee Fontans, who went through life
with me and shared so many decisions, artistic and otherwise, and
thank-you to Megan Lafrenire and Lisa Pai for their steadfast support
and belief in my work, for nominating me. A big thankyou to Maegen
Black and the Canadian crafts community for all the opportunities it
has given me. And of course to all the others who have helped me in
this life as a maker and thinker.

Congratulations to a great artist and excellent teacher!

Way to go Charles. I can’t think of anyone who deserves this award
more. You have added so much to our lives as jewelers, including your
early and enthusiastic support of Ganoksin and Orchid. Mazel Tov,
dear friend.

What a great representative for our Canadian jewellery industry.*

He approached me to allow him to post pictures of my diamond setting
bench in his first “The Jewellers Bench Book” (page 39).

Great Charles! Congratulations!!! I own several of your books… this
is great… but certainly not a surprise!!! WELL EARNED!

Yes indeed, congratulations to Charles Lewton-Brain.
Well deserved I am sure.

Congratulations to Charles on winning this prestigious award

Reading about Charles winning this award has caused me to reflect on
how much he and his teachings have influenced my life over the past
19 years since I became interested in goldsmithing and metalsmithing.
My first exposure to goldsmithing was when I took the beginners
jewellery course at the Alberta College of Art and Design where
Charles was and I believe still is, head of the Jewellery department.
Coincidentally, the class was being taught by his wife,Dee Fontans.
It was at this class that I caught the goldsmithing bug which has
been my hobby and a second source of income ever since.

I later took several courses at the Lewton Brain - Fontans Center
for Jewellery arts, including fold forming, which was so rich in
content that I chose to take it from Charles a second time several
years later to pick up on everything that didn’t sink in the first
time!.

I have a Charles Lewton Brain reference section in my own small
library with books on a diverse set of topics including Cheep Thrills
in the Tool Shop, Foldforming, The Jewellers Bench Book, Theory and
Practice of Goldsmithing and the Jewellery Workshop Safety Report, in
which Charles actually quoted an email about safety that I had sent
him. All of these books also contain a personal inscription from
Charles.

I was a member of the Metalphoric Group of metal artists which he
was instrumental in forming. In late 1996, when the internet was in
its infancy (at least it was new to me), I stumbled upon Ganoksin and
signed up for the Orchid digest, which I have read almost every
evening for the last 15+ years.

I recently retired from my day job as an engineer (actually two days
ago). I am not at all worried about being bored during retirement as
I have a hobby and a skill to keep me occupied. Charles has been a
very big part of facilitating and helping me gain that skill set.
Thank you Charles for everything you have done for me and for
everything you do for the advancement of metalsmithing here in
Calgary, nationally and internationally. And again, congratulations
on an award well deserved!

I have has the good fortune to take one of charles’ classes and have
him as our first keynote speaker. In every instance he has been
humble and unassuming. But we all know the scope and breadth of his
knowledge and this latest award is yet another affirmation.
Congratulations, Charles!

Congratulations, Charles, the award was well-deserved!