The Gold Chaser; The Life and Legacy of Master Craftsman Edmund
Kavanagh.
By Joyce Sidey Brogdon 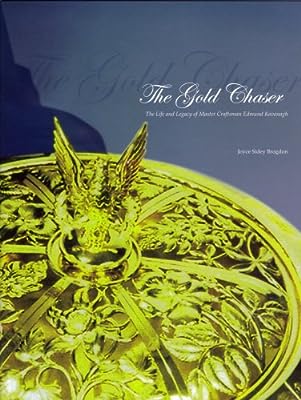 Edmund Kavanagh as a repousse chaser was one of the team working for
the London Silversmiths Asperys that made the 18ct Gold Rose Bowl to
celebrate President Dwight D. Eisenhower and his wife’s 50th wedding
anniversary. It is the piece in his not inconsiderable body of work
of which he is most proud and it gives the book its title. This is
not a how to repousse/chase book, rather it is how one chaser has
lived an adventurous and rewarding life on one side coupled with the
deep insecurity that can go with being self employed. It is the story
of Edmund Kavanagh born in the centre of Dublin in 1933 into a
comfortable family who operated catering and retail establishments.
He was the last child born into the family of four older brothers and
two sisters, both of whom died as infants. Because of this his mother
brought him up as a girl for the first four or five years of his
life, going so far as to dress him as a girl, dyeing his hair blond
and calling him Maureen. He survived this and if there is one thing
Kavanagh has with knobs on its balls.

He hated school the only subjects he had any interest in was geometry
& drawing, which he excelled at. At the tender age of fourteen years
he starts an apprenticeship in John Smith Ecclessticial Art
Metalwork’s. Edmund then got seriously ill and spent considerable
time in hospital with was thought to be TB. On his discharge from
hospital he resumed his apprenticeship in another Dublin firm
silversmiths.

Edmund then meets his future wife and for reasons outlined in the
book the two of them elope to England ending up in London where
Kavanagh secures a job for himself as a repousse/chaser in the firm
of Comyns. After a while he sets up shop on his own doing contract
repousse chasing work for London’s leading silversmiths. His
customers read like a who’s who’s of the English capitals leading
silversmiths of the nineteen sixties. As well as the rose bowl
already mentioned he was involved in many prestigious projects many
of them illustrated including a replica of the London Mace.

From London he sets out for New York to a job that’s waiting for him
in the company of David Webb. After a while he leaves the secure job
in Webb’s and again sets up shop for himself. Things become so
difficult and work so scarce that Kavanagh contemplates suicide.
Being a man of faith he thinks it through and decides to live. Then
unbelievably out of the blue Tiffany’s seek him out to do
repousse/chasing for them. Work became plentiful and he then opened
a Jeweller’s shop in Westbury on Long Island. Kavanagh and his son
were violently attacked and robbed by a gang of thugs virtually
cleaning him out. After this robbery he took some additional
security measures one of which included equipping himself with a
gun. Edmund was held up again but in the ensuing gunfight pumped a
few bullets into the robber who fled the scene the police later
caught the injured criminal.

Among the exceptional people we are introduced in the book is his
old friend and mentor the Hungarian migr from the 1956 Hungarian
uprising Anthon Rubesch, the holocaust survivor Ludwig Wolpert who
introduced Kavanagh to Judaica. And Frantisek ( Frank) Khynl the
Czech goldsmith and model maker who quietly produced works of art in
18ct gold from his home in a dodgy area of Queens in NY. The
collection he left on his death are now on display in a museum in
his homeland.

Although Edmund Kavanagh is a native of Dublin like myself I don’t
know him although I had heard about him. The author serves Kavanagh
well and presents what I considered an authentic voice, for me she
brings him alive. The book is a great insight into the art of
silversmith in three great silversmithing capitals Dublin, London &
New York. The book was published in 2007 and we are told that Edmund
was in semi retirement in the foot hills of Blue Ridge Mountains of
Virginia. I make him 87 years of age and I hope he is still going
strong. I wrote this review with the hope that this book might get
the bigger audience it deserves. I take my hat off to him and he is
a great credit to both his old country and his new country.

You should paste the review into the Amazon

web page. I am sure that
asuch a glowing endorsement from a fellow chaser with a reputation
such as yours can’t hurt.