Best way to make this ring

I am making a ring for a friend, and I am a little bit unsure how to
proceed. White gold ring with.75ct diamond. The setting that holds
the diamond will have cut out scrollwork between the prongs. There
are 8 prongs in sets of two. I guess you would call it a basket
setting, nice antique vibe. As I am fairly confident working with
wax, I originally thought I’d carve it and get it cast, but then
started to have thoughts about whether it would be durable enough…
Just so you know, I have not done heaps of gold and diamond
jewellery, so this is a bit of a stretch for me. I really want to do
this well though. If I do cast rather than fabricate, any advice on
the thickness and width of the prongs for good durability? I am not
sure how to put up a pic, that would be much easier to explain it.

Lost Wax Steampunk and not so steampunk Costume Patterns and Tutorials

Or… send the files to the attention of service@ganoksin.com and
we will upload them for you…

Here’s a picture of the ring from my last post. 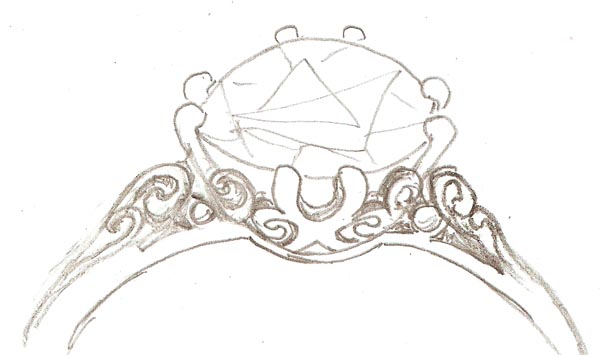 What you describing is called Scroll Claw setting. There are 3 basic
types that goldsmiths had to learn ( no longer true ): Organ Pipe
Claw, Arcade Claw, and Scroll Claw.

They all done by constructing a collet and piercing the design from
it. I do publish DVDs dealing with these subjects, but none of them
would be helpful in this particular situation.

I do have a short clip, which may give you some idea of how it is
done. While not a substitute for detailed instructions I provide in
my DVDs, it still contains some useful info. The name of the clip is
Goldsmith Chronicles with subtitle “The Bubbly Tale”. You can find it
on benchtube or here is the direct link
http://www.ganoksin.com/gnkurl/1b6

The presentation is a bit unusual, but that is because some people
call me Luddite. So to fulfill their expectation, I show it in such a
way.

I personally wouldn’t cast it; either make the collet and then
pierce it, or lay it out in the flat, pierce it, then form the
collet. The latter is possibly easiest.

I wouldn’t make a big deal of it. If you fabricate it, you’ll still
have a lot of detaling to do in metal. Suppose you spend a couple
hours bending, sawing, soldering, and some part of it doesn’t look
ring. Start over ? I’d Carve it. Fact is, the particular character of
the drawing suggests a carved form to me, soft and organic.

I’d probably choose a purple carving wax, hard enought to get sharp
details, flexible enough to not break so easily. Having carved
countless waxes of that type, maybe it just seems more doable to me,
although I’d probably spend a couple hours, maybe more, on that one.
Block it out on a slice of wax ring tube the width of the ring, ream
it out to size, reduce it to the profile. I’d probably do most of the
carving with small cylinder burs, krause burs, inverted cone burs,
and short pieces of saw blade held in a pin vise. Then refine it with
dental picks re-shaped to tiny scrapers. Finish it by smoothing with
lighter fluid and a small, somewhat stiff paintbrush.

I’m not saying that a wax like that would be easy if you don’t do a
lot of that kind of carving, and you might carve a couple of them
before you’re satisfied with it, but it would be good practice if you
want to continue doing that style of work.

Unfortunately it looks an awful lot like a standard shank - pre-made,
already cast and ready to go… in your choice of karats at that! I
beleive Hoover and Strong also sells a similar item…Nonetheless if
you want to do it yourself,

Remember the measurements must be exacting, and the soldered edges
clean and flush: fitting perfectly once you get to setting the stone.
Pickle the strip.

At this point you may use a Foredom AllSet to mill the angles for
the stone’s pavillion to fit into on the claws Once the strip is
closed and soldered you won’t be able to just zip along on a flat
plane, which is easier than measuring each “c” shaped wire then
making sure in hand cut stones, the angle matches where you first
tried it in the setting… -

( *as opposed to planishing it- as it seems you don’t want texture
on the shank but a mirror finish ( high polish).

Yes, you could carve and cast, but your design is simply scrolled
wires that are flattened ( at least that’s what it loooks like from
the illustration) and aded onto a shank with two beads near the join
of the claw setting and the shank…so keeping the work easiest is
best- strips of shank can be fabricated ahead of/in your spare time
all the while, improving or making the design more and more unique,
if not exactly the same as the original as one of your repertoire. It
can be fabricated faster and faster using this method once you learn
how many pieces of wire of x gauge you need to cut at x length for x
scroll, etc., how to get the best angle using x tools for the claws,
and other elements that become pat…Since you have open ended
scrolling it seems easiest to me ( and I have made probably 2000
rings for customers similar to this one without casting, or by
modifying similar pre-made shanks ( setting accent stones, adding
beads or granules of different colour metals, etc. )…It is among
the easiest designs there are. If you have questions as this was
written fast ( and i’m not re-reading it for clarity!) feel free to
contact me off list…rer

The above recommendation is a complete gibberish!

Collet must done first and all piercing afterwards.
No micro-motors or other gadget junk.
Good old jeweler’s saw and a steady hand.
Nothing else needed.

Leonid, I hope you don’t object if I add a couple good needle files
to that tool list… (perhaps just in case the steady hand isn’t
quite as totally steady as it once might have been…

Hey, thanks for all the input,

I’m trying a few things just for the experience. I have done a wax of
the setting, which worked pretty good, also tried piercing the design
flat and then bending, soldering, and shaping in bezel block, which
ended up distorting, as it stretched the most at the finer points of
course. Next up- I’ll make the collet and then pierce. Any
recommendation how thick the claws should be (8 in sets of 2 on a 6mm
diamond) and therefore what thickness sheet I should start with? As
well, I am not entirely happy with the dimensions I get with the
bezel block, would like instead of a straight side, for it to be
slightly more bowl shaped. Would I go in afterward with a dapping
punch?

Lost Wax Steampunk and not so steampunk Costume Patterns and Tutorials

Not at all. Needle files are necessary and as important as good saw
frame. And since we talking about them, here are few thoughts.

Over the years, I have made huge investment in all kind of needle
files, but the most useful are escapement ones used by watchmakers.
If you never bought them before, the price tag can shock you, but
they are worth it.

As small as they are, very often they are not small enough. So if one
wants to be ready for everything, they have to be modified even
further. But even with modifications, they can still be too big. So
we are back to saw frame and 8/0 blade.

Incidentally, if saw frame used for filing, an old blade is better
than new one. So do not through those blades away, when they stopped
cutting. They still can be useful.

Thickness of claws depends on how skilled you are. Ideally, the
smaller, the better. But claws have to hold stone secure, so
consideration of size should not undermine stone safety. Silver would
require more bulk. Platinum is a very good choice if very small claws
are required.

If you want curved walls, consider using dapping block instead of
bezel block, but understand that curved walls would present
difficulties while setting the stone, and difficulties while
piercing. Unless you can manage to orient saw blade towards the
geometric center of the curve at all times, which is very difficult
to do, the piercing will not look good.

Let me suggest that you pursuing wrong objectives. In designing a
setting, primary consideration is stone appearance and safety.
Designing for the sake of designing is not a good practice.

Whatever design elements you want to incorporate in setting, they
serve the only purpose of exposing stone to as much light as
possible. The task of goldsmith is to design a setting which has high
optical efficiency and at the same time have aesthetically pleasing
appearance. Collets are done with straight walls to control the
reflections, to direct them to stone pavilion. Curved wall would
disperse reflections, instead of concentrating them. Also, straight
wall cone is much better in resisting deformation than cup-shaped
form.

At one point, a couple decades ago, a vendor I used carried
inexpensive sets of small needle files. By small, I mean a total
length of about 2.5 to 3 inches or so. They came in cuts from quite
coarse to a number 6, very fine, with a set of six being about seven
bucks or something like that. Not sure where they were made, but
probably china or india, or the like. Despite being cheap, they were
well made, good steel, and being cheap, I felt no qualms about
trimming them as needed, either for metal, with the medium and fine
cuts, or for wax work, with the coarse ones. I still have a number of
those, such as a former barrette shape that’s been flattened on the
back and narrowed some. Now springy, and thin enough to fit into the
kerf of a coarse saw blade. Really fragile though… I’ve not seen
these files for sale in a long time though. Pity.

The a few years ago, I stumbled upon some really neat tiny files
that Tevel, the owner of Alcraft, had brought to a SNAG convention.
they were made for watchmakers, to file out the hole in a watch hand.
Roughly the size of a sewing needle. THOSE were small files. Only
round and square shapes, but still, pretty neat. The only trouble
with them is that being so small, they were really easy to misplace.
And one student/friend of mine who I’d let borrow my bench for a job
she wasn’t equipped to do at her own, not even realizing that that
piece of rough looking scrap wire she saw on my bench was a file,
proceeded to hold it in a pin vise and use it as a solder pick…

Good advice, Leonid. I so enjoy your posts here on Orchid. You have
that wonderful Russian quality of cutting right to the meat (point)
of an is sue–cutting through the American "political-correctness"
BS that I so abhor. One other thing that no one seems to have
mentioned is that a tiny saw-blade, when mounted in reverse position
can make a great burnisher for those tiny hard -to-reach places. I
know you knew that. Gary Strickland

Leonid may have known that but I had never thought of it. Thanks for
passing on a great little tip.