I am trying to recreate a cheap necklace for a friend in Sterling.
He adores this $5 necklace and has worn it continuously for about 5
years straight. (yuk!) The component I’m seeking advise on is a bent
tube with a window cut out for the leather cord to show through.

My first thought was I could grind away the window at a belt sander,
which I don’t have. Out in the garage Mr. Fox has a grinder! One
nano second at the grinder and I burnt off my finger prints. So I put
the bent tube in my vise and filed away. I need to make 10 of these
pieces, with some resemblance of consistency. As you can see in the
scan 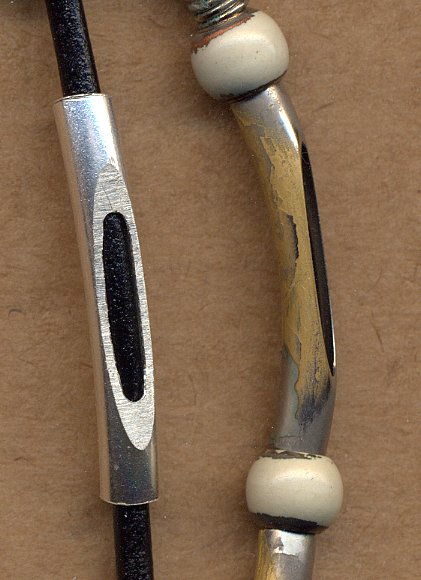 I have obviously selected a tubing much thicker than the original,
thus the thickness alters the appearance quite a bit. If I wanted to
remove more silver at the peaks of the window what should I use? Am I
going about this the wrong way? I respect any advise you can offer a
novice.

It looks like you could hold the tubes with needle nose pliers on
each side and then grind away. That would avoid lighting your
fingers on fire. If you have a support plate on the grinder to hold
the work against then you should be able to control the depth of the
grinding wheel pretty easily.

Why not just saw off the excess? or mold and cast the best surviving
link from your friend’s necklace.

if you have a dremel-type machine and a polishing buff for it and
some compound like tripoli or fabulustre you can just remove the
cord and polish/smoothe the opening enough to resemble the original
slot in the old necklace. by the time you have removed the
benchgrinder scratches you will probably have ‘finished’ the edges
of the openings so that further work won’t be needed. or, if you can
scrounge up a muslin or felt wheel the same diameter as the
benchgrinder stone you can take off the stone, mount the polishing
wheel on the benchgrinder arbor (the threaded thingy stuck through
the motor that turns the stone) - you may have to increase the size
of the hole in the center of the polishing wheel, if so, i’ve found
that an old soldering iron heated up & inserted into it will enlarge
just about anything.

I would grind/file the ‘windows’ before I cut the tube into
sections. That way there would be always be enough metal to hold.

I think I would make the parts by inserting a brass or similar metal
rod into the part before bending. The part can stick out enough to
serve as a handle for the grinding operation and will also keep the
sanded divide line crisp. In order to get the mandrel out of the bent
tube, one leg of the rod would have to take on the same bend as the
part, so it is bent at the same time the silver is. The part can be
ground and polished with the mandrel in place and will improve the
accuracy of both.

You have already received some good suggestions but if it is not too
late I’ll add my 2 cents.

First of all, your big problem seemed to be burning your fingers
because of the machine-generated heat. My first response to this -
You are not making very many of these pieces so why use a machine at
all? If you had to make a hundred of them or a thousand, OK, but for
only ten it isn’t so hard to do it by hand.

Before getting to the specifics, I’d say that we all need to be
careful about accomodating to machinery. That is, we spend a lot of
time and energy trying to cope with the heat, the expense, the
dangers, the dust, the noise etc etc that machines bring along with
their seductive speed and power. It’s always worth a bit of time to
evaluate whether they are really needed for a particular job,
whether they are worth the risks and costs. If you are concentrating
on keeping your fingers from being cooked, shredded,or eaten by your
friendly machinery, your mind and eye is not always really on the
workpiece. It shows in the work.

Your second concern was with uniformity. Try the following to solve
both issues.

For even a small number of pieces like this I might sandwich the
bent tubing between two square plates of other material. Off the top
of my head I might try any of the following; Perhaps a couple of
squares of mild steel, or brass, or even hardboard or plexiglass.
The stuff would not have to be excessively thick or cumbersome. I
think 1/8 inch would be more than sufficient. The two squares might
be accurately located relative to each other by a few small bolts
through them both - like the toothpicks stuck through a club
sandwich - and they can be separated the appropriate distance by
washers or other spacers or shims on the portion of the bolt that
passes between the two plates. They should be separated by a
distance just a tiny bit less than the outside diameter of your
tubing.

Now add a few other pins or little blocks of material to hold the
little piece of bent tubing in place. One on the inside of the curve
and one at each end so the tube can’t slip lengthwise. The idea is
to have the tube sitting between the two plates with the part you
want to cut off, the outside of the curve, just protruding from
between the edges of the two plates - like the edge of a piece of
bologna sticking out from the side of a sandwich.

It may be advisable, as one of the other people suggested, to insert
a piece of brass or copper wire through the tube- if you can find
wire that is a good fit. This will keep the tube from being crushed,
but I think if you get your spacers between the plates figured
right, it won’t be a problem. Now place the whole sandwich between
the jaws of your vice, snug the vice up enough to hold all in place,
and file off the protruding portion of the tubing. The tube can’t
rotate because it is curved. It can’t move end to end because you
have it blocked. It can’t get pushed further down between the plates
because you’ve got it blocked there also. You can probably go with a
pretty coarse file to start and then go to a finer cut as the file
approaches the edges of the plates. Maybe even finish up with some
wet-or-dry abrasive paper wrapped around a flat stick. You use the
plates’ edges as your guide. You might want to put strips of
masking tape on the edges of the plates or coat the edges with
chalk, nail polish or whatever it takes so that you can easily see
when the file has gone as far as it should. When you get each one
filed down,lossen the vice, pop out the bit of tube and drop in the
next one and do the same. As long as you don’t file down the edges
of the plates all the tubes will come out the same. I’d be surprised
if it takes 2 minutes per each to do the job. You can use a buffing
wheel and tripoli or similar compound to soften and cut back the
ends of the elongated oval hole as you wish. That way there will be
no knife-edge left there to cut the string that will run through the
tube. You can also probably do that shaping and smoothing with a bit
of string coated with abrasive - One end of the string tied to
anything handy, (like the back of a chair - then inserted through
one end of the tube and out the new hole. Pull the string tight with
one hand, slide the tube along the string back and forth with the
other hand at whatever angle it takes to smooth and enlarge the end
of the hole to where you want it.

I hope this helps.

Marty in Victoria BC where I’ve just put all my tools in boxes to
move to a new house, new shop, and I sure hope I can find them all
when I unpack.

Machines and technology should be used to their utmost when they
actually improve a process. Many times the “seductive speed and
power” are mere illusions. We also seem prone to doing a job a
certain way just because our teacher said so, or because it has
always been done that way, or (children’s favorite) everyone else
does it.

One particular task that has resulted in countless injuries and
ruined work is that of finishing chains, bracelets, and similar
difficult-to-control items. I have had teachers instruct me in
techniques to prevent loosing fingers and workpieces on an arbor
polishing machine. Others have suggested using a flex-shaft instead
of the polisher.

IMHO we should not be using machinery of any kind for finishing
chains, etc. (unless it is a large production set-up where speed is
essential and procedures have been carefully planned, honed, and
executed). After working with a chain or bracelet one can (safely
and carefully) use a flex-shaft with solid buffers–NOT fabric
buffs–to bring it to the final-polish point. For final polish, leave
the buffs alone (use them on rings and things), place the article in
an ionic cleaner, thoroughly rinse it, dry it, give it a manual
buffing with something such as a Fabuluster cloth, and bring out the
final gloss with something like Stuller’s Ultra cloth.

This procedure is not only much safer, but gives you a chance to
caress the piece and pay full attention to every aspect of the final
polish.

Del Pearson of Designs of Eagle Creek in Beautiful South Texas where
speed is sacrificed upon the altar of quality.

I just want to say how much I enjoyed your thinking on this, your
creative problem-solving-- and your very effective imagery. I
especially liked the “bologna sandwich” description. Very clear.
Well-done! It almost makes me want to make this project, now that I
have a great way to do it.

This is the kind of thinking that makes all things possible.