With all this discussion of niello, and how, once a batch is made,
you can use it for years…is there anybody out there who would be
willing to mix some up and sell it to us in small quantities? At a
price that makes it worth your while, of course. I’d love to try it,
but would be reluctant to mix it on spec, so to speak. Also, does
anyone have a sense of what (if anything) the buying public thinks of
it? Thanks, and love to you all for this great forum–it makes me
feel that I’m never totally on my own, there’s always help
available–and companionship with folks who think as I do,
MOL… --Noel

Really? Which one was it Uranium or Cadmium? Do you know for sure
that it was radioactive or is it an urban myth? Even though the glaze
is purported to hold U or Cd is the metal biologically available? What
was your source from which you obtained your Why am I
asking these questions? Because after working on three long
postdoctoral fellowships on heavy metal toxicology the stuff that’s
coming across in this thread is becoming tiresome. Please move on. And
if you want to inform us may I suggest that you go to your local
library and get the facts about heavy metals and share them with the
rest of us.

By the way Cd compounds can be red or orange. Oil paints are called
cadmium red or cadmium orange not without reason.

U compounds are often yellow to yellow green and have been found in
glass dating back to 79AD. Compounds of both metals are toxic from a
chemical standpoint. Source: Handbook of Chemistry and Physics (HCP).
I have personally worked (and published) on cadmium toxicology. Both
Cd and U compounds require handling with respect.

It is likely that some of you smoke all the while commenting about
toxic materials. Please may I suggest that those who do smoke check
the URL’s below. A cigarette, now there’s a source of biologically
available toxic materials. Enjoy.

To end on a positive note. Sulfides of Ag, Pb and Cu are readily
available. Why can’t these be ground together in the proper
proportions and then fused? Possibly because the melting points are
respectively 825, 1114, 1100 degrees C. Source: HCP

I was told this by my college ceramic professor who’s is no longer
available, being dead, to ask as to the source. He missed the reds
that the cadmium, I think it was, produced and said that it was no
longer possible to get good reds that were dependable. It was only the
orange red ware that would set off the Geiger counter. I would never
have worried about it and in fact wanted my mother-in-law’s old set
when her house was disposed of. I night not have drunk coke or coffee
from the orange mug all day, but storing and using the plates would
not have bothered me. Karl taught at IU for many years. His story was
that as a young man, he couldn’t decide between a career in chemistry
or art so settled on ceramics. I do not remember his class with
pleasure. We had to mix our glazes using dry ingredients after
deciphering the chemical formula. I never did like math or chemistry
and didn’t enjoy having it intrude into art.

not urban myth as we had a couple of these dishes in my high school
chem lab in 1971 . They were used as a source to demonstrate the use
of a Geiger Counter to the lab classes. I know there was U in the
glaze but do not know if there was any Cd.

How about some input from you as you have the education that the rest
of us lack. This is not meant to be a snide comment. I would be
interested in your input. I have already been flamed off list for my
"mison this topic by another list member.

It probably would be worth a try the temps are not too high to deal
with. Dose anyone have an idea of the relative amounts of each
sulfide in nellio?

Custom Made Mokume Unique Engagement and Wedding Rings   Whether you are planning to propose or looking for wedding rings you want a ring that is a symbol of your love and commitment and reflects your individuality.  Explore our galleries to find the...

As far as the US is concerned uranium does not appear to be included
in the current glaze formulary. Cadmium never made sense as major
ingredient - period and also does not appear in curent use
formulary. There are still some lead containing glazes in use but
they should not be in or on food use items in the US . I believe the
EEC is even more restrictive today. Items from Mexico and other less
developed countries are still a different story. You can still find
lead and maybe even set a counter ticking with stuff made there. The
historical comments and prior use formulary are substantiated in F.
H. Nortons published works on ceramics.

Uranium oxide was (is?) a very common glaze ingredient for ceramics
except possibly for the period 1940- 1958 approximately when the
government controlled the material totally. It makes an excellent
bright orange , some reds and black. Cadmium has been used as the
sulfide as an orange over glaze. It does not survive normal firing
temperatures and would not be common. Any uranium oxide would be
expected to be natural uranium. It would have still contain
radioactive U-235. The oxide is yellow. At one time at least the US
government still owned all the depleted U-238 residual from the
weapons programs. This material was reduced into the metal and has
been used in non nuclear projectiles like in Iraq etc. I am not sure
how radioactive the residual is but I never observed any particular
concern over handling this material. It would be expected to have some
retained radioactivity. Finding a slightly radioactive ceramic piece
would not be un expected. This would not be expected to materially
add to normal other ionization sources as a biological risk. There
are other heavy metals in common use as glazes i.e. Antimony in
yellows, chromium in greens and reds, cobalt in blues and pink,
nickel in greens etc. Lead oxide was a common glaze base world wide
until relatively recently. Current US and EEC glazes should be lead
free. Less developed world area glazed pottery would be suspect.
Detection kits for lead are pretty widely available at hardware
stores in the US. “Normal” lead exposures have been considerably
reduced through the change to unleaded fuels, lead free paints, lead
free glazes etc. Unfortunately there are exposures out there and
it looks like the lawyers are going to target the deep pocket
original possible sources for these. An expensive process with little
or no benefit to the public.

A few general rules: Know your materials If its not food don’t eat
it. Use adequate ventilation. Keep away from children.

Neillo and lead based enamels have a place but they should made and
applied in Asafe manner - The above rules work here.

Two books on the subject for artists: "Artist Beware 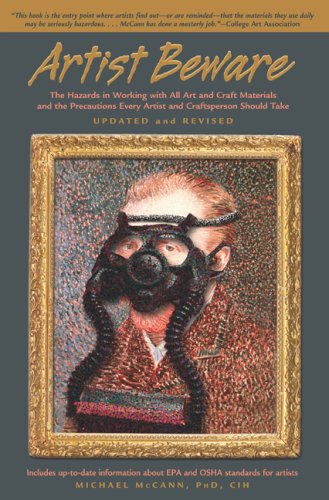 Artist Beware, Updated and Revised: The Hazards in Working with All Art and Craft Materials and the Precautions Every Artist and Craftsperson Should Take 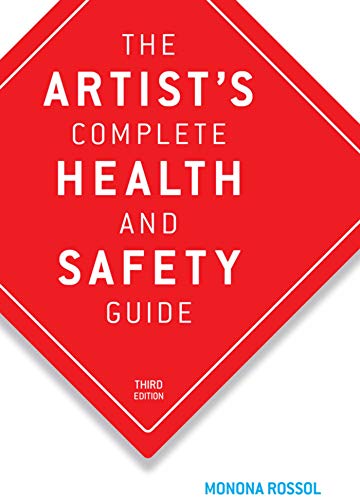 G’day; whether one likes it or not, science intrudes everywhere
about one; including metalsmithing, manipulating gems or clays or
colourful metal oxides as well as in the kitchen and the bedroom (oh
yes it does!) Whilst I deeply sympathize with anyone who, like me,
simply gets caught out on numbers all the time, (counted on fingers
until 18!) everyone should know a little of simple chemistry and
physics. I don’t mean that everyone ought to be able to decipher
complicated formulae, but simply know just enough to understand the
difference between specific gravity, weight and volume, or between an
acid and an alkali, or an oxide and a salt. After all, those
difficult chemical names are really precise descriptions of the
chemical. H2O (with a little 2) simply means one atom of oxygen
joined to two atoms of hydrogen. CuS simply means one atom of copper
(cuprum) joined to one atom of sulphur; it’s just another name for
copper sulphide, or ‘antiquing’. So if you want to buy jeweller’s
pickle, you really must know that you want sodium bisulphate and that
sodium bisulphite - used by all home brewers for sterilizing bottles -
simply won’t work as a pickle.

Just as primitive tribes educate their children in what things are
good to eat, how to harden the end of a stick to make a spear, how to
generate a fire …, modern children need to know why they should
not excrete just anywhere, and that lemonade and milk simply don’t
mix! And they should also know enough simple elementary science to
manipulate the world around them intelligently.